Two high-ranking officials at the Department of Veterans Affairs exercised their constitutional right against self-incrimination today, declining to answer questions about a scheme in which they allegedly bilked taxpayers out of hundreds of thousands of dollars. Just to be clear, this kerfuffle is not to be confused with the larger VA scandal that was recently distorted and minimized by presidential candidate Hillary Clinton. That corruption entailed the deliberate, systemic cover-up of unacceptably long waiting lists for care -- in part to protect bureaucrats' performance bonuses. This corruption is entirely different, though it speaks to the culture of of greed and wastefulness that seems to pervade much of the federal bureaucracy (via the Washington Post):


The Department of Veterans Affairs has suspended a relocation program used by two senior executives to obtain more than $400,000 in questionable moving expenses and moved to discipline the officials, a senior agency leader said Monday...Congress is investigating the executives for allegedly abusing their positions to get plum jobs and perks, part of a pattern of unjustified moving incentives and transfers identified by VA’s watchdog. The committee subpoenaed Pummill, the executives and the two lower-ranking regional benefits managers they forced to accept job transfers against their will, according to investigators. But the executives, Diana Rubens and Kimberly Graves, refused to testify, telling the committee they were asserting their Fifth Amendment rights under the Constitution to protect themselves against self-incrimination...[Pummill] declined to say what action the agency is taking against Rubens and Graves, who kept their salaries of $181,497 and $173,949, respectively, even though the new positions they took had less responsibility, overseeing a fraction of the employees at lower pay levels.

In this video, President Barack Obama mocks the GOP candidates for outing the bias of the CNBC debate moderators.

And yet even his running dogs in the media, like the AP, have complained about Obama’s press control and thuggish censorship:


The Obama White House routinely bars news media from meetings with foreign leaders and other events, then releases its own photos of those events —

The presidents of the American Society of Newspaper Editors and the Associated Press Media Editors have urged their members to stop using White House handout photos and video, saying they amount to propaganda.


For the second consecutive year, the Obama administration more often than ever censored government files or outright denied access to...

“Secretary of State John F. Kerry on Tuesday urged the president of Tajikistan not to go overboard in its crackdown on political Islam and expressions of faith….Although the population is 98 percent Muslim, several peaceful Muslim groups have been banned and their offices forced to close. Under the pretext of combatting Islam, men with long […]

Unskilled, Uneducated, and Destined to Live on Welfare Forever 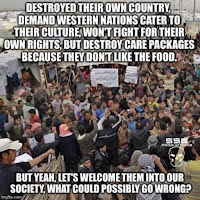 Over 80% of the Muslim invaders recently arrived in Germany  have no formal qualifications or job skills, and only eight percent have a college degree, local media reported citing research by the country's Federal Employment Agency. Even worse, there are tens of millions more of them on their way and at least 80% of them are […]
Read more of this post
Posted by Diane Sori at 11:16 AM 2 comments:

TODAY, November 4th on RIGHT SIDE PATRIOTS on CPR Worldwide Media from 2 to 4pm EST, Craig Andresen and Diane Sori will discuss the EU protecting American whistleblower Edward Snowden, the newest on the abomination known as ObamaCare, and the restructuring of the GOP debates. 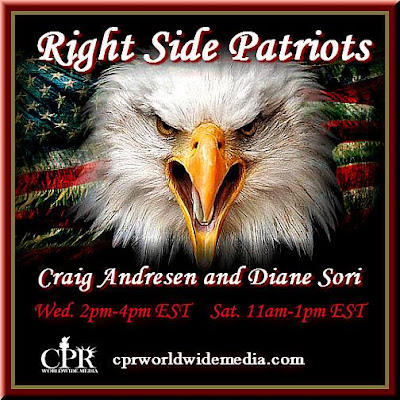 Posted by Diane Sori at 2:03 AM No comments:

'It's an outrageous waste of money that raises suspicions that there is something more there than just stupidity.”
- John Sopko, Special Inspector General for Afghanistan Reconstruction (SIGAR)

Lets see now...we've got Americans living paycheck to paycheck; we've got homeless veterans and veterans still waiting for medical care; we've got ILLEGALS raping both our welfare and medical systems; we've got Obama helping to fund the 'so-called' moderate rebels who are anything but; and now we find out that a defunct Obama initiated task force...The Task Force for Business and Stability Operations (TFBSO)...gave the green light for the Department of Defense to spend nearly $43 million of our taxpayer dollars to build and set up the 'Downstream Gas Utilization Project'...a compressed natural gas filling station (CNG) for cars only in the small and somewhat isolated Afghan city of Sheberghan in the northern province of Jowzjan.

Nearly $43 million...$42,718,739 to be exact spent between 2011 and 2014 to construct and supervise the initial operation of the station...with approximately $12.3 million in direct costs and $30 million in 'overhead costs'...spent on what is in reality a simple gas station with just a few pumps...$43 million spent even after the initial contract awarded to Central Asian Engineering back in 2011 stated that NO more than $3 million was being allocated to build said filling station.

And pray tell what 'overhead costs' could possibly reach $30 million for one simple gas station.

Something sure stinks in D.C. yet again...something sure stinks when the Department of Defense (DOD) fails to answer any questions about the $800 million the TFBSO itself cost, along with its claim that said task force's employees NO longer work for the DOD.

Created by the Obama administration run Department of Defense back in 2009, the said goal of the TFBSO was to try and revive Afghanistan's almost non-existent economy, and even though the TFBSO was disbanded back in March of this year, lo and behold supposedly having come online in May of this year (and NO proof exists that it did) was this $43 million money pit...a money pit paid for by 'We the People' courtesy once again of our hard earned taxpayer dollars. And making this even more grievous is the fact that when a similar CNG filling station was constructed in Pakistan it cost just under $500,000 to build...leaving you to wonder NOT only where exactly the additional dollars went but where did those additional dollars come from, and why the few cars in Sheberghan, Afghanistan, were worth a $43 million filling station to begin with.

“There may be fraud. There may be corruption. But I cannot currently find out more about this because of the lack of co-operation,” Sopko continued, but the fact is that when costs go so far above the allotted monies 'maybes' and 'corruption' become reality, especially with an administration...with a president...whose middle name is 'lying traitor.'

And a case in point can easily be made for both fraud and corruption, because the anything but bright idea to build this type of gas station came even after officials discovered that despite having vast natural gas reserves, Afghani drivers relied solely on petrol to power their cars...what few cars there are in Afghanistan that is. And when you add in that there appeared to be NO 'feasibility study' done prior to the project being started...a 'feasibility study' that if done would have shown that all cars needed to be converted in order to run on natural gas...they would have seen that said conversion would have been cost prohibitive for the average Afghani in that it costs up to $800 to covert just one automobile, and that with the average Afghani household income being just $690 per year...with many families having ten or more children...NO way was this gas station built to help the Afghani people cut the dependency on foreign gasoline nor was it built to jump start their economy.

And once again Sopko's words raise serious questions..."I have never in my lifetime seen the Department of Defense or any  government agency clam up and claim they don't know anything about a program...."Who's in charge?... Why won't they talk?...We have received more allegations about this program than we have received about any other program in Afghanistan"...all questions that must be answered, but answered truthfully NOT with stonewalling as was the case when these questions were posed to Brian McKeon, the principal deputy under the secretary of defense for policy.

In his answering Sopko's questions that, "the closure of TFBSO in March 2015 and departure of all its employees have resulted in the Office of the Secretary of Defense (OSD) no longer possessing the personnel expertise to address these questions or to assess properly the TFBSO information and documentation retained by WHS in the OSD Executive Archive," McKeon is doing NOTHING but playing the 'pass the buck' game as he tries to cover-up what truly is proving to be one hell of a shady operation.

So again...why build this abomination...why flush $43 million dollars of 'We the People's' monies down the proverbial drain of a country seeing for years now a reemergence of a newly empowered Taliban...and why is the Department of Defense deliberately blocking access to both documents and personnel who could give the answers to these need-to-know questions...the answer really is quite simple and has NOTHING to do with mismanagement of funds for maybe, just maybe, this money was actually used in the same manner as (I believe) Obama's ILLEGALLY running guns and weapons through Benghazi to the anything but moderate Syrian rebels was used....meaning these monies (in my opinion) were actually funneled 'under the table' to help fund the enemy either with the purchasing of guns and weapons or with combat training.

And why is this a more likely scenario...because why build such an expensive filling station in the isolated and lightly populated area of Sheberghan in the first place...an area deemed too dangerous for anyone to even venture out into to verify whether the station was operational...instead of building it in the more populated capital of Kabul which would have made more sense. And isn't it odd that Qashqari Oil and Gas Services, who 'supposedly' began operating the station when it 'supposedly' opened in May 2014, did NOT renew its business license in November of the same year...YES it is...and red flags should be raised because allocating $43 million to a country where we basically lost the war what with us pulling out, leads one to believe the monies did indeed go elsewhere from where the DOD claims it went.

And that $43 million is on top of the $400 to $500 million of our taxpayer dollars spent on airplanes that the Afghan Air Force could NOT use. That's $43 million on top of the $8.4 billion we've given Afghanistan since 2002 for counter-narcotics efforts yet that country remains the world's leading producer of opium. That's $43 million on top of the millions spent to improve medical care and professional training for Afghani women that U.S. development authorities cannot track or account for...yet the enemy seems to have the latest in arms and weapons...and lots of them...coupled with the money to pay for them. And isn't it odd that America's president...Barack HUSSEIN Obama...does NOT seem the least bit concerned about any of this.

Yeah $43 million is a lot to pay for one filling station that is knowingly useless to the people it's supposed to aid...yeah $43 million is a lot of money suspiciously spent that NO one seems to know anything about...but $43 million is just a drop in the bucket when it's funneled 'under the table' to help fund an enemy out to kill us all. And all this is just part and parcel for an administration corrupt to its traitorous core...and all this is part and parcel for an administration that will, like in Benghazi, try to sweep this matter under the proverbial rug.

So much for the Obama self-proclaimed...anything but...most transparent administration in America's history. Can't wait to see the media spin on this one...just saying. 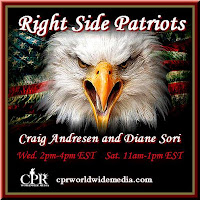 Today, November 4th on RIGHT SIDE PATRIOTS on CPR Worldwide Media from 2 to 4pm EST, Craig Andresen and Diane Sori will discuss the EU protecting American whistleblower Edward Snowden, the newest on the abomination known as ObamaCare, and the restructuring of the GOP debates.