Islamic State: “You will not have safety even in your dreams, until you accept Islam”
By Robert Spencer / Jihad Watch

Not that this has anything to do with…Islam. The title of this Islamic State video comes from the Qur’an: “Those who disbelieved among the People of the Book and the polytheists were not to be parted until there came to them clear evidence…” (98:1) More on this story: “‘You Will Not Have Safety Until You […]

It isn’t the Iranians who have sold out. It’s Obama. He has sold out the American people.


TEHRAN, Iran (AP) — A senior commander in Iran’s Revolutionary Guard said Sunday that inspectors would be barred from military sites under any nuclear agreement with world powers.

Gen. Hossein Salami, the Guard’s deputy leader, said on state TV that allowing the foreign inspection of military sites is tantamount to “selling out.”

“We will respond with hot lead (bullets) to those who speak of it,” Salami said. “Iran will not become a paradise for spies. We will not roll out the red carpet for the...

Email ThisBlogThis!Share to TwitterShare to FacebookShare to Pinterest
Op-ed:
Gay Marriage, Gay Weddings, and the Candidates
By: Diane Sori / The Patriot Factor / Right Side Patriots on CPR Worldwide Media cprworldwidemedia.net

Last week was a busy week for the regime...first we had Barack HUSSEIN Obama calling to task Senate Republicans for delaying a vote on his attorney general nominee Loretta Lynch, and then Samantha Power, our Ambassador to the U.N., telling the foreign operations subcommittee of the House Appropriations Committee that the U.S. would continue to support Israel “when it matters” but that Obama would NOT rule out the possibility that the U.S. would support anti-Israel resolutions at the U.N...or as I call them the U(seless) N(ations). Also, we had DEA agents once again cavorting with hookers but NOT a one was fired, and a postal worker went 'postal' and landed a gyrocopter on the White House lawn.

And let's NOT forget Hillary's big week as she and her mini-van headed out to Iowa to 'test the waters' if you will. Let's see...multimillionaire Ms. 'I Left the White House Broke' stiffed a waitress of a tip, parked in a handicapped parking spot and was NOT ticketed, and hid behind dark sunglasses so NO one would recognize her...the presumptive Democratic presidential nominee. The 'Butcher of Benghazi' did NOT want people to know it was her...one has to wonder why.

But the big news story carried by all the media was...drum roll please...Republican presidential candidate Marco Rubio...and my personal first choice...being asked in a recent interview with Fusion network's Jorge Ramos if he would attend a gay wedding...oh the inhumanity of it all.

Gay weddings have now become the media's cause de jour once again....yawn. As if we did NOT have enough of this nonsense a few weeks ago with all the bruhaha over wedding cakes and pizza being splashed all over the news almost non-stop.

NOT jobs creation, our limping economy, immigration reform, sealing our borders, Obama's sellout to Iran, or other issues of true importance but gay weddings...a social issue...a state's issue...is what the left wants brought to the forefront so it can divide we conservatives even more over religious lines just like Mitt Romney being a Mormon was used by the very same left...and successfully I might add...to get the ubber-religious right in a tizzy. And while those candidates who have declared they will run or those whose announcements are expected to come shortly all hold the traditional view that marriage is between a man and a woman, Marco Rubio dared to say that he would attend a gay wedding, Ted Cruz told the media that since he had yet to be invited to any gay weddings he does NOT know at this point in time if he would or would NOT attend, while Jeb Bush as usual hemmed-and-hawed, and Rick Santorum said he most assuredly would NOT.

“If it's somebody in my life that I care for, of course I would,” Rubio said, adding that “I'm not going to hurt them simply because I disagree with a choice they made... you respect that because you love them.”

Very wise words in my opinion from a very wise man who knows that the issue of gay marriage is a state's issue and who does NOT let his personal religious beliefs...that marriage is between one man and one woman...to overrule the love he might have for someone who he refuses to define by their sexuality alone...as many sadly on our side do.

And what of the other 'in the media spotlight' Republican hopefuls...

Ted Cruz...my personal second choice...at least was honest enough to say he's NOT sure and would decide when and if he was ever asked, but also rightfully blamed the news media for trying to“twist” the same-sex marriage debate into a “battle of emotions and personalities” that comes off as though “any conservative must hate people who are gay.” And Cruz, like Rubio, also rightfully believes that questions about marriage should be left to the states and NOT be decided in court.

Scott Walker has already attended a wedding reception for a gay member of his family, while still holding onto his religious belief that marriage should be between a man and a woman. And he too, like Rubio and Cruz, believes this issue should be a state's issue and should be honored if passed and becoming law. 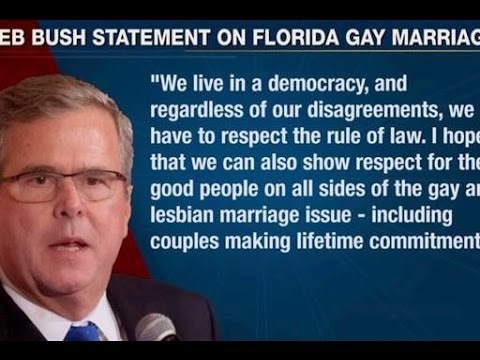 Jeb Bush...my former once great Florida governor who should now just put a 'D' next to his name and be done with it...is a bit more accepting to some degree of gay marriage and gay weddings in general. While NOT an endorser of marriage equality he still believes that America needs all forms of loving families, including loving same-sex parents who “should be held up as examples for others.” And one thing I will say in Jeb's favor... maybe the only thing I can say in Jeb's favor right now...is that he too knows this issue of gay marriage as a whole is a social issue and as such belongs on the state's level, and said so during a recent Hannity interview.

However, Rick Santorum...the darling of those basing their vote on their religious convictions alone...emphatically said when asked if he would attend a gay wedding, “NO I would NOT...as a person of my faith, that would be something that would be a violation of my faith.” But Santorum added that he “would love them and support them but NOT participate in that ceremony.” Now my question to Rick Santorum is this...if you love someone and support someone how can you turn your back on that someone on what to them is the happiest day of their life...that is NOT love nor is it support...it is hypocrisy plain and simple.

As for Mike Huckabee...a genuinely good and decent man but like Rick Santorum NOT presidential material in my opinion (although he might might make a good VP choice)...a man set to announce his presumed run for the presidency on May 5th...but again like Santorum his stance on gay weddings mirrors his personal religious convictions on gay marriage in general in that he wants gay people...even those NOT of his personal religion...to practice his religion by NOT getting married. Very odd stance from the man who has said time and again on national television that he has close personal gay friends.

And last comes Rand Paul...the Libertarian dressed in the guise of a Republican... who has now flip-flopped to some degree in order to appear more conservative as just this past March, while pandering for votes when speaking to a group of pastors in Washington D.C., said that “a moral crisis is leading people to believe that same-sex marriage is acceptable...it's not.” This from the man who also like Rubio and Cruz once believed that gay marriage was solely up to the states to decide whether to accept it or NOT.

So why now has gay marriage and gay weddings suddenly become the issue de jour facing the Republican candidates...first, because later this month or early next month the Supreme Court is set to decide to either strike down the remaining state bans on gay marriage or leave them in place. Second, because...gasp...gay marriage in general is becoming more acceptable to people of both both parties. And third, because what better way to divide we conservative than to drive a wedge between religious conservatives and the growing number of non-religious conservatives. 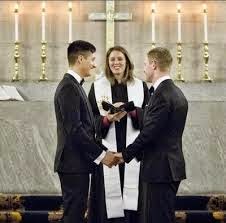 But the bottom line in all this is people love who they love thus boiling this issue down to legalities on the state's level in that committed gay couples need access to 'civil marriage'...legally binding marriage...for the same reason that heterosexual couples need it for only the law can create a family relationship between adults that will be recognized by the state and third parties...third parties like employers and insurance companies. And gay couples want the cultural status of marriage...NOT just civil unions...because that’s what people in general rightfully look for when they want to show their family and friends their commitment to each other.

And gay couples marrying in NO way affects traditional marriage for even traditional marriage officiated by a clergyperson still needs governmental legal status. And when you think about all the ubber religious who say that marriage is all about reproduction just think about all the childless 'traditional' couples you know...because they could NOT reproduce either by choice or by circumstances...does that damn them to hell in religious people's eyes...I would sincerely hope NOT.

So the bottom line is this...we have important issues facing 'We the People,' our country, and our candidates right now...Iran, our unsealed borders, our limping economy, those out to kill us all, just to name a few...who marries whom...who shares ones bed with whom...who would or would NOT attend a gay wedding...should NOT and must NOT be one of them.

Focus people focus...the true issues and priorities for the candidates and for us are in plain sight if you just open your eyes to see them.
Posted by Diane Sori at 12:01 AM 3 comments: