ObamaCare goes down in the House!
By: Diane Sori

Kudos to these five Democrats who voted for repeal of ObamaCare: Reps. Dan Boren (Okla.), Larry Kissell (N.C.), Jim Matheson (Utah), Mike McIntyre (N.C.) and Mike Ross (Ark.), sided with Republicans in the final vote. Of this group, all but Matheson voted with the GOP in a procedural vote on the bill Tuesday.

The 112th Congress has 51 Democrats, 47 Republicans and 2 Independents.  We need 4 to cross over and vote with the Republicans to repeal this mostrosity in the Senate as we need 51 votes for repeal NOT the usual 60.
Posted by Diane Sori at 4:51 PM No comments: Links to this post 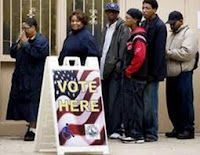 Not a smart move from the Obama team as Barack Hussein Obama, America’s first black president, snubs the NAACP.  Obama has decided NOT to attend their Annual Convention in Houston, Texas this week, instead choosing to send Mr. Foot-in Mouth himself, Joe Biden, in his place.

Not smart is an understatement as he’s snubbing the very group that helped put him in office.

However, today Mitt Romney will speak at the NAACP Convention because he understands the importance of the black vote.  Left wing bias aide, Romney knows that blacks might no longer simply vote along racial lines, and that’s thanks to the emergence of true conservative black Republican leaders like Hermann Cain, LTC Allen West, Mychal Massie, Condoleeza Rice, and others who are loudly speaking out against the policies and agenda of Barack Hussein Obama and his far left minions.

Even though we all know that the majority of blacks still will NOT support or vote for Mitt Romney, we also know that a large percentage of blacks have become disenfranchised with Obama, so much so that they might just decide apathy is the route to go, deciding to stay home and NOT vote at all.  And why would they do that...for starters, with the jobless rate for black Americans at 14.4%, instead of at the national average of 8.2%, Obama, the country’s first ‘supposed’ black president, chooses instead to pander to gays and Hispanics while doing basically nothing to address this critical issue of black unemployment.

And this issue alone has strongly resonated in the black community and it might cause a major backlash against Obama...and rightly so.  Remember, while Obama is under no obligation to deal specifically with black issues, this was the man who promised blacks so much with his ‘Hope and Change’ rhetoric, yet blacks are no better off economically today than they were before he became president.

Then add into the mix Obama’s recent executive order stopping the deportation of hundreds of thousands of ILLEGALS (which some surveys say 88% of blacks oppose) and you have some very unhappy black Americans.  The black population will be the first to feel the effects of Obama’s policy change as they now have to compete even harder with those suddenly ‘legal ILLEGALS’ for certain types of jobs.  And when you stir in Obama’s support of gay marriage (which according to a NewsOne survey 2/3 black Americans oppose), an issue that cuts into the heart of the black community as it goes against most black Americans core religious beliefs, you now have some very disillusioned black voters who Obama can no longer count on to vote for him in the same disproportionate numbers as they did in 2008.

And while Obama cannot just promote a black agenda, a white agenda, a purple or polka-dot agenda, as he is supposed to be the president of ALL Americans, we know he is anything but.  This man has deliberately caused a racial divide and racial disparities between blacks and whites all for his own political gain.  But even with that, that doesn’t mean that he is justified in being silent about black economic issues or is he justified in placing the needs and wants of ILLEGALS before the needs of legal black Americans.

Race relations will improve when Barack Hussein Obama is out of office but the negative economic impact he has caused the black community with his favoring ILLEGALS over them will take years to overcome.

But it won’t be overcome if black Americans blindly vote race this time around.