The 3-year highway funding bill up for debate in the Senate today has been surrounded by plenty of controversy. Sen. Ted Cruz (R-TX) very publicly lambasted Majority Leader Mitch McConnell (R-KY) for including an amendment to the legislation that would reauthorize the Export-Import Bank, which many conservatives criticize as coporate welfare. Although McConnell also tacked on a vote to repeal Obamacare to somewhat appease his small government-minded colleagues, Cruz scoffed that it was no more than an empty gesture.

Unsurprisingly, the Obamacare repeal vote has failed to reach the 60 votes it needed to progress.

Stay tuned for more updates as the Senate votes on today's highway bill.

Update: In another blow to conservatives, the Senate has voted to reauthorize the Ex-Im bank.

Cruz and other Republicans are incensed not only because McConnell offered the Ex-Im amendment, but also because he rejected their attempts to defund Planned Parenthood, which they tried to do for obvious reasons.

By the way, Republicans determined to stop the president's health care law are not letting today's defeat slow them down. Sen. Mike Lee (R-UT) has already made clear he will introduce the Obamacare repeal amendment again once the highway funding debate is over.

Mr. Trump, Where's The Issues Section On Your Campaign Site?

Donald Trump is surging. He’s tapped into the anger within the electorate about how Washington has failed to do anything about immigration. Yet, it’s really grounded in what voters see as a lack of the rule of law on this issue and many others, specifically Obamacare, coming from the Obama administration. The president’s delay of the employer mandate is arguably on the precipice of violating separation of powers, but that’s for another time. The Donald wants to “make America great again,” but he doesn’t want to tell you how he would do it. He has no issues section on his website, as Rare’s Corie W. Stephens noted yesterday. She also wrote that we shouldn’t be surprised:


Trump’s political speeches tend to be rambling, barely coherent declarations of self-promotion, often citing how rich he is and listing off people who allegedly ask him for favors. Trump has made vague policy commentary in the form of statements such as “I will build a great, great wall on our southern border. And I will have Mexico pay for that wall, mark my words.”

Muddying the waters.  The Obama Administration apparently threw the Kurds under bus in order to induce the Turks to do something — anything — against the Islamic State. And so yet again Obama antagonizes an ally in service of an entity that is far less likely to be pro-American. “White House says Turkey has right […]

In his 2006 speech at the University of Regensburg in Bavaria, Pope Benedict XVI quoted a 14th-century dialogue between Byzantine emperor, Manuel II Paleologus, and a Persian Muslim scholar;


“Show me just what Muhammad brought that was new, and there you will find things only evil and inhuman, such as his command to spread by the sword the faith he preached.”

Yes, that more accurately sums up the Islamic contribution(s) to mankind.

Email ThisBlogThis!Share to TwitterShare to FacebookShare to Pinterest
Op-ed:
Less Than 60 Days and Counting
By: Diane Sori / The Patriot Factor / Right Side Patriots on CPR Worldwide Media www.cprworldwidemedia.net 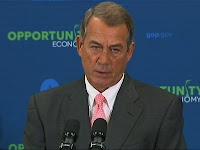 "Members of Congress will ask much tougher questions when we meet with the president's team, and because a bad deal threatens the security of the American people, we're going to do everything possible to stop it."
- Speaker of the House John Boehner on Obama's Iranian nuclear surrender

Oh so pretty words out of the mouth of Obama placater John Boehner, especially with his and the House's track record of doing the right thing being NOT exactly stellar. And while the bipartisan leaders of the Senate 'Foreign Relations Committee' did condemn Obama's outwardly having pushed for ratification of the Iran nuclear deal by the U.N. Security Council before Congress even had a chance to read it let alone vote on it...the fact remains that Congress is still basically rendered impotent to stop its passage because of the Corker-Cardin Bill...a bill which actually protects the Democrats wanting to make a deal with Iran... actually protects Obama's wanting Iran to become a nuclear power. 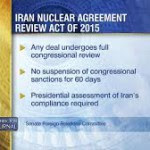 And even though the 'Iran Nuclear Agreement Review Act of 2015' was approved by 98 Senators and 400 House members, the 'Corker-Cardin Bill' itself leads the way... whether intentionally or NOT...for Iran to become a nuclear power because first, this bill does NOT require that Congress approve the Iran deal before sanctions can be lifted and second, it reverses, if you will, the Constitution’s presumption against international agreements, meaning the Constitution does NOT give the president the right to make binding agreements with foreign countries on his own. The Constitution surmises that the president should NOT and must NOT take on any enforceable international agreements, deals, or accords without the approval of those 'We the People' elected to represent us and do our bidding.

And the Constitution mandates that NO international agreement can be considered binding unless it garners either a super-majority approval by two-thirds of the Senate or said agreement is enactment through the normal legislative process, meaning passage by both chambers of Congress, and then and only then a signature by the president. But the 'Corker-Cardin Bill's' passage means that instead of requiring the president to get a two-thirds super majority of the Senate to approve the Iran deal, it requires those against the deal to get a two-thirds super majority of the full Congress to defeat the deal. Translation: with Republicans now needing 67 disapproval votes in the Senate and 291 disapproval votes in the House to kill the deal...which will be hard to do...Obama will now once again most likely succeeded in selling America...and Israel...out to the enemy.

They voted all this down to pass instead a bill that the Democrats...that Obama...liked and now the U.N. itself has added insult to that injury by ramming the Iranian deal through its Security Council while Congress sits back and blames everybody else without taking a good long look in the proverbial mirror. Now hopping mad at what the U.N. did before they had a chance to vote either in support of or hopefully against this very deal, Congress remains oblivious to the fact that they themselves are complicit in these events because instead of standing up to Obama they put their own political interests...meaning getting re-elected...over national interests...par for the course I'd say of those too afraid of the race card being used against them to do the right thing.

And after the U(seless) N(ations) did what it did Obama's mouthpiece in this deal...John 'Swiftboat' Kerry...had the unmitigated audacity, in a recent nationally televised interview with NBC's Matt Lauer, to warn Israel they dare NOT attack Iran’s nuclear program either via bombing or cyber-attack. Warning Israel...actually threatening our ally Israel...Kerry tried to hide the very fact that in Annex III, page 142, Section D-10 of this Joint Comprehensive Plan of Action (see entire transcript of the deal here: https://www.justsecurity.org/wp-content/uploads/2015/07/271545626-Iran-Deal-Text.pdf) are words that allow for a possible counter-attack by the U.S. and others to help Iran protect its nuclear sites against any and all attacks by Israel. Saying instead that an attack by Israel on Iran would be a huge mistake with grave consequences for both Israel and the region, Kerry slipped and admitted that, and I quote, “Iran already has enough fissile material for 10 to 12 bombs” ...something I and my Right Side Patriots partner and friend Craig Andresen have been saying since this Iran brouhaha first started. 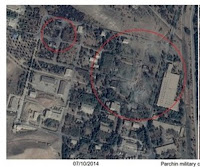 And now, in addition to the annex issue, it's been leaked that the IAEA and Iran have reached two separate and very secret agreements in reference to the inspection of Iran's, to date, off-limits Parchin military complex along with how Iran will or will NOT address the IAEA’s still unanswered questions regarding past weaponization work. Remember, this very bad deal addresses Iran's presently known facilities alone.

Also, it was announced that these secret agreements have NOT and will NOT be released for either public perusal nor will they be submitted to Congress for review before a vote on passage or rejection of the deal is taken. And this alone is a breech of law...a breech which Obama knows about but does NOT care about...as it goes directly against the 'Iran Nuclear Agreement Review Act of 2015' that he himself signed into law and which clearly states that “any and all annexes, appendices, codicils, side agreements, implementing materials, documents, and guidance, technical or other understandings and any related agreements, whether entered into or implemented prior to the agreement or to be entered into or implemented in the future,” must first be approved by Congress.

"Put simply, no deal means a greater chance of more war in the Middle East," Obama keeps bloviating ad-nauseum, but the truth is hidden in what Kerry did NOT say during the above mentioned interview. Besides his referring to the deal as a treaty which we know as per our Constitution it is NOT...is that America, the P5+1, and the IAEA are now willing participants in setting-up Israel to be forced to attack Iran because Iran will surely NOT abide by the deal...secret or otherwise...that they signed...and that Iran will then counter-attack Israel with the U.S. under the Obama regime siding with Iran the enemy against Israel our ally in their joint effort to rid the world of the 'pesky' Jewish state...to do to the Jewish people what Hitler could NOT accomplish.

And Israel knows this well for the details hidden in the annexes, appendixes, and secret agreements of this very bad deal are NOTHING but a blanket threat to Israel to either accept as fact that Iran will soon become a nuclear power or that we...the United States of America...will help Iran make sure that the Levant becomes reality.

So while Obama appeasers John Boehner and Mitch McConnell put on a phony front of concern and consternation about this very bad deal, we now have less than 60 days to make sure we garner the needed votes to NOT only kill this capitulation to the enemy but to override Obama's sure to come veto if we do. And then after the vote is taken, and NO matter its outcome, immediate impeachment proceedings must be started against Barack HUSSEIN Obama for willingly and knowingly 'aiding and abetting' the enemy...it's called treason...by signing a deal that goes directly against our Constitution, our national security, and the security of what's left of the still free world.