The Phone Call to Putin

Since Thursday, many people have asked me what I would do about the Ukraine after the murderous downing of the Malaysian Airliner by Ukrainian rebels (which is another way of saying Russian forces). There is a clear path and it is clearly the time for that plan.

President Obama has looked like a weakling to this point. His inaction over the Crimea was inexcusable. His later unwillingness to provide armaments to our ally, Ukraine, to defend itself further enhanced the impression of his being a wimp and whipping boy for Putin. In Obama’s defense (yes, there is some though it is meager), Ukraine itself was in disarray at the time and our European partners were even less willing to confront Putin being more interested in their business interests.

The facts on the ground have changed. The Ukrainian election resulted in Petro Poroshenko taking charge of the government, and take charge he has. This is a leader with the backbone that is missing in many world leaders today. In addition, any queasiness from Europeans or other allies of taking on Putin has been mitigated by the brutality of this demented act.

Obama has a clear path to reestablishing his position as a respected leader. This moment calls for the leadership of the United States. And it can be done without causing a broader war with Russia. There has to be a clear show of resolve.

Obama needs to coalesce the most important leaders first, and make it clear that there is no other direction. He needs Merkel of Germany, Cameron of Great Britain, and Hollande of France to fall in line. Mark Rutte, Prime Minister of The Netherlands, will be easy -- he lost 154 of his fellow countrymen. Tony Abbott of Australia and Stephen Harper of Canada will be with him because they both have guts and they also lost citizens. New Zealand will be with us because they are always with us. The other countries of Europe will have to fall in line, including Italy and Spain. Japan will aid us however they can.

With the coalition in hand, it is then time to speak to Putin. Putin is not easily bullied (bullies rarely like being pushed around), but he is not psychotic and he knows when to regroup for another day. He thinks in the long run he will win out and knows when to not fight with a losing hand. That is why he called for a ceasefire.

President Obama needs to say: “The rebel revolt in Eastern Ukraine has to be ended and ended now."

"We know that you and your team are behind this, and you are supplying the weapons if not advisors and personnel. I am speaking for a coalition of world leaders who are behind this effort. We are unified in our position that this cannot go any further.”

“First, we are now implementing sanctions that will put on hold any banking and commerce you have with the rest of the world. All your supporters will immediately have their assets frozen. In a short time we will bring your economy to its knees.”

“In 24 hours, we and our allies in will begin shipping armaments to the Ukrainian government until the rebellion is either stopped or crushed. In the next week, each member of the coalition has volunteered to send advisors to aid the Ukrainian military in the logistics and training of forces. I also want to make clear that any attempt to pressure the Ukraine or any of the members of the coalition with a threat of cutting off supplies of oil or gas will immediately be mitigated. We have the support of the Saudis (who need us more than ever with ISIS running wild in Iraq) who have agreed to meet any reduction in world oil supplies that you attempt to cause here.”

“The rebels must immediately surrender their arms to Ukrainian forces. They will be given free passage to Russia if they wish, or they will be allowed to stay as peaceful citizens of Ukraine. But let me be clear, for the sanctity of the world and for peace this must be done. We do not want to take these measures, but unless we see prompt actions by the rebels we will be forced to do such and I suggest you not doubt our resolve.”

This is the time. This is what needs to be done. History tells us if we don’t stamp this out now it will only grow worse and significantly more dangerous. Anyone I have proposed this to sees this as a clear path. They only doubt whether our President has the fortitude and leadership to take it.
Posted by Diane Sori at 1:19 AM 3 comments:

U.S. Treasury. Monthly Treasury Statement of Receipts and Outlays of the United States Government for Fiscal Year 2013 Through May 31, 2014. [PDF Document]. Share on Facebook 67

Who are the major holders of debt issued by the U.S. federal government going into the summer of 2014? The answer is presented graphically below: 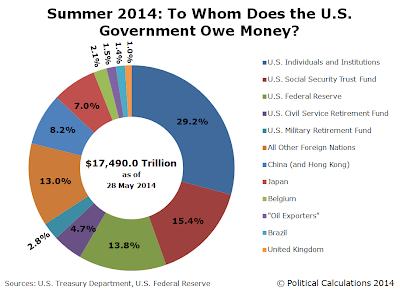 On the whole, there haven't been many changes since our previous edition. We see that the debt reported to be held by Belgium is still considerably inflated over historic levels, as this nation's banks would appear to have acted on behalf of Russian interests seeking to place their U.S. government-issued debt holdings in non-Russian financial institutions ahead of and in the months following Russia's actions to seize control of Crimea from Ukraine.

The Federal Reserve also holds some $1,648 billion in mortgage-backed securities, which are primarily issued by government-backed entities, including the Government National Mortgage Association (Ginnie Mae), which is owned by the U.S. federal government, and the Federal National Mortgage Association (Fannie Mae) and the Federal Home Loan Mortgage Corporation (Freddie Mac), which are nominally private institutions, but which have been operating under government conservatorship since 2008. Although these government-backed entities issue mortgage-backed securities, their role is to collect and bundle the mortgages of U.S. homeowners and firms for the money they've borrowed into pools, which are then securitized and traded on the open market - it is not money borrowed by the U.S. Treasury or federal government agencies. 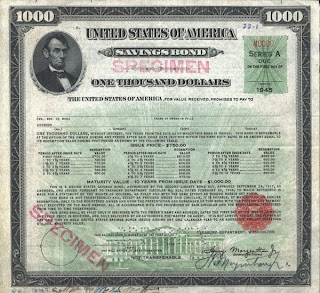 The Federal Reserve began its most recent round of QE government-issued debt buying in the fourth quarter of 2012, which it began doing to keep the U.S. economy from falling into a full-fledged recession at the time. Beginning in January 2014, the Federal Reserve has been steadily reducing the amounts its QE purchases every six weeks, as it believes the risk of falling into recession has diminished.

Even though the Federal Reserve has been reducing its purchases of U.S. government-issued debt securities since the beginning of 2014, as of 28 May 2014, it has boosted its net holdings of the federal government's liabilities by $148.8 billion.

Meanwhile, the U.S. federal government borrowed an additional $138.1 billion from 1 January 2014 through 28 May 2014. Or rather, the Federal Reserve has acquired 107.7% of the net new debt that has been issued by the U.S. Treasury and other federal government agencies during the first five months of 2014.

That's possible because of two factors. First, with the bills for U.S. federal income taxes coming due on 15 April 2014, the federal government experiences a surge of tax revenue during this part of the year, which can be enough to allow it to run a short-term surplus, reducing its need to borrow money during this period of time.

Second, the Federal Reserve is displacing other entities that lend money to the U.S. government, who are seeing their share of debt issued by the U.S. government fall as the debt they hold matures. That allows the U.S. Treasury to roll over a portion of the existing national debt and borrow more money, in this case, from the Fed, which doesn't show up as a net increase in the overall size of the national debt.

And that is how the U.S. Federal Reserve can lend more money to the U.S. federal government than the U.S. government appears to have borrowed, even as the Fed is reducing the amount it lends to the government! Data Sources Federal Reserve Statistical Release. H.4.1. Factors Affecting Reserve Balances. Release Date: 5 July 2013. [Online Document]. Accessed 16 July 2014. U.S. Treasury. Major Foreign Holders of Treasury Securities. Accessed 16 July 2014.

U.S. Treasury. Monthly Treasury Statement of Receipts and Outlays of the United States Government for Fiscal Year 2013 Through May 31, 2014. [PDF Document].
Posted by Diane Sori at 1:06 AM No comments:


Secretary of State John Kerry on Sunday said an "enormous amount of evidence" points to Russia providing antiaircraft missiles and training to pro-Russian rebels in Ukraine who shot down Malaysia Airlines Flight MH17.


Kerry also said U.S. intelligence agencies "saw the launch" of a missile from rebel-held territory just as the passenger plane vanished from radar.

Kerry's accusations came as as international horror deepened over the fate of the victims' remains.

Kerry demanded that Moscow take responsibility for actions of pro-Russian rebels in eastern Ukraine whom Washington suspects of downing the jet with a missile, and expressed disgust at their "grotesque" mishandling of the bodies.

Television images of the rebel-held crash sites, where the remains of victims had lain decomposing in fields among their personal belongings, have turned initial shock and sorrow after Thursday's disaster into anger.

Emotions ran high in the Netherlands, the home country of about two-thirds of the 298 people who died in the Boeing 777. The Dutch foreign minister has said the nation is "furious" to hear bodies were being "dragged around," while relatives and church leaders demanded they be rapidly returned home.

But the departure of dozens of corpses loaded into refrigerated railway wagons was delayed on Sunday as Ukrainian officials and rebels traded blame over why the train had not yet left the war zone, and where or when international investigators would be able to check it.

The U.N. Security Council is scheduled to vote on Monday on a resolution that would condemn the downing of the plane and demands that those responsible be held accountable and that armed groups not compromise the integrity of the crash site.

In an apparent bid to compromise with Moscow, the wording of the resolution, drafted by Australia, was changed to characterize the incident as the "downing" of the flight, instead of "shooting down," according to the final draft obtained by Reuters. Diplomats said it was unclear if Russia would support the final version.

"Drunken separatists have been piling bodies into trucks and removing them from the site," he said on NBC television on Sunday. "What's happening is really grotesque and it is contrary to everything President Putin and Russia said they would do."

Moscow denies any involvement in the disaster and has blamed the Ukrainian military. While stopping short of direct blame on Moscow, Kerry put forward the most detailed U.S. accusations so far, based on the latest U.S. intelligence assessments.

British Foreign Secretary Philip Hammond urged Moscow to ensure international investigators had access to the crash sites. "Russia risks becoming a pariah state if it does not behave properly," he told Sky television.

Australian Prime Minister Tony Abbott said he had spoken "overnight" to Putin for the first time about the disaster, amid mounting horror over the treatment of victims' remains. At least 27 Australian passengers were on the Malaysia Airlines flight.

Abbott said an Australian investigation team was in Kiev but had been unable to travel to the site. He said there had been some improvement with the Ukrainian government offering access.

"But there's still a hell of a long way to go before anyone could be satisfied with the way that site is being treated," Abbott said. "It's more like a garden cleanup than a forensic investigation. This is completely unacceptable."

Email ThisBlogThis!Share to TwitterShare to FacebookShare to Pinterest
The Architect of Destruction
By Maureen Scott
Posted by Diane Sori at 12:00 AM 2 comments: