GOP, Let Obama Shut It Down and Own It

Establishment Republicans inside and outside Washington miss the grassroots' point. Even if we don't eventually prevail with defunding Planned Parenthood, we need to take this issue to the American people.
Establishment types believe that just as we are finally poised to recapture the White House, crazy tea party extremists are about to mess everything up because voters would blame and punish the GOP in 2016 for a shutdown.

They've cried wolf so long that conservatives no longer believe them. The conservatives aren't idiots. They knew when they elected these majorities that they would have great difficulty advancing the conservative agenda with President Obama in office. But they didn't expect them not to even try.

Yet the Republican leadership doesn't put up a fight, and establishment pundits go along with this surrendering. These are the same people who are apoplectic over the rise of Donald Trump. They can't understand how conservatives would support a man they believe is not conservative.

That’s fitting in Barack Obama’s America, since he so indefatigably aided the Brotherhood when they took power in Egypt and continued to do so even after they were toppled, and since the Brotherhood is a chief competitor to the Islamic State in wanting to establish a caliphate of its own. It’s also a fitting symbol […]

Email ThisBlogThis!Share to TwitterShare to FacebookShare to Pinterest
Putin to those who supported “Arab Spring” in Middle East: “Do you realize what you have done?”

Not only have delusional Western leaders not realized what they’ve done, Obama was  boasting about his Libya success in his UN speech today. Libya is nothing short of a spectacular failure –it’s in utter chaos. Libya has degenerated into bloody jihad war. The Prime Minister fled the country last year. Ironically enough, while Obama was bragging over his Libya success, ten died in Islamic attacks in Benghazi. The Islamic State has conquered parts of Libya and they mean to take it all.

The whole world is laughing at him — laughing with blood.

Obama promised he would radically transform this country. And he has. Putin’s speech is a defining moment — a Russian leader schooling America on human...

GOOD NEWS! Americans, increasingly, would like to see Islam, as a religion, made illegal in the U.S.

Capping a week when Republican presidential candidate Ben Carson set off a firestorm after suggesting a Muslim should not be allowed to be president, the results of a new Public Policy Polling survey are kind of encouraging. When Iowans described as “usual Republican primary voters” were asked if Islam should be legal in the country, just 49% answered “yes.” (That many?) Thirty percent said the religion should not be legal, and 21% weren’t sure.

MTV  Among those supporting Donald Trump, 36% said Islam should be banned while 38% said it should not. When it came to supporters of former Pennsylvania Sen. Rick Santorum, 100% of responders said the religion should be illegal, in comparison with 6% of those backing Kentucky Sen. Rand Paul.

Email ThisBlogThis!Share to TwitterShare to FacebookShare to Pinterest
Op-ed:
Putin Triumphs Over Obama Yet Again
By: Diane Sori / The Patriot Factor / Right Side Patriots on http://cprworldwidemedia.net/ 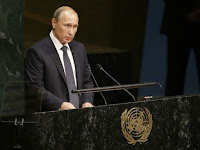 “We need a 'genuinely broad alliance against terrorism, just like the one against Hitler.”
- Russian President Vladimir Putin speaking yesterday before the U.N. General Assembly

Fact: if Bashir al-Assad and his government fall ISIS moves in and takes over complete control of Syria, and Vladimir Putin knows this just as Barack HUSSEIN Obama knows this, but the difference is that when it comes to ISIS and islamists in general, Putin is the good guy and Obama...well Obama is NOT just the bad guy... Obama is the bad guy who sides with and aids those out to kill us all.

And while speaking yesterday before the U.N. General Assembly for the first time in a decade, Vladimir Putin, in a tough uncompromising but well-received speech, of course began with a veiled but unnamed slam against the U.S. when he said that the original purpose of the U.N. had been violated by "those that found themselves at the top of the pyramid" after the Cold War, and that "they thought they knew better and thought they did not have to reckon with the UN to legitimize their decisions."

Quickly adding that, "Of course, the world is changing," and that, "The UN must be consistent with this natural transformation. Russia stands ready," Putin knows well who the enemy is, both the here and now tangible enemy in the guise of ISIS as well as the enemy allowing them to get away with what they are doing...as in Barack HUSSEIN Obama...the man...one of the brethren...who is doing absolutely NOT a thing of substance to stop ISIS let alone destroy ISIS for the fact is that Obama is willingly arming the 'so-called' rebels in Syria with U.S. arms and equipment knowing full-well that these supposed rebels are NOTHING but a tentacle of ISIS and other terrorist groups.

And Putin is also wise enough to know that the Obama instigated and fed into regime change in Syria...just like it was in Egypt...has only succeeded in creating even more instability and destabilization in the Middle East, and it's all because he single-handily lost the peace that George W. Bush had won in Iraq...and losing that peace is what directly led to the birth of ISIS and their worldwide call to jihad.

And now because of Obama's complete and total failure in destroying ISIS...actually with Obama's aiding and abetting of ISIS...Putin proposed a U.N. Security Resolution where Russia would lead an anti-ISIS coalition, and if truth be told maybe he can do what we, thanks to our traitor-in-chief, have failed to do. And while the U.N. is NOT to be trusted on most matters...with Agenda 21, the New World Order, and their vehemently anti-Israel stance coming to mind...Putin's proposal that calls for the world to coordinate its actions to fight ISIS based upon the principles laid out in the U.N. charter do make some sense, because the simple fact is that in order to fight an enemy that has gone global we need a broad international coalition working in tandem in order to defeat...to annihilate...ISIS. 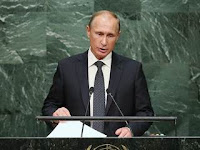 And what's sad is that things might have been different if Obama had allowed U.S. forces to fight to win the battle instead of fighting to win the “hearts and minds” of the enemy...our enemy his brethren that is...for if Obama had 'shocked and awed' the bastards back to the 7th century from whence they came instead of doing pin-prick air strikes that accomplished NOT a damn thing... Putin's proposal would NOT ever have been needed, and Russia would NOT recently have started building up its military presence in Syria in an attempt to keep al-Assad from being overthrown by the many rebel groups operating and gaining territory within Syria.

And if Obama had handled the ISIS situation differently...if Obama had been the least bit concerned about the slaughter...the genocide...of Christians at the hands of the enemy...Putin would NOT be challenging U.S. influence in the region and Russia would NOT be forging alliances with Iran as well as expanding their leadership role in both Syria and Iraq, and doing so even though Russian ground troops will NOT be, as per Putin, taking part in battlefield operations in Syria “for now.”

And again if Obama had handled things differently, Russian Ambassador Vitaly Churkin would NOT have told reporters that Assad's Syrian government along with its ally Iran should be included in a joint action to defeat the jihadist threat. And to add insult to injury, as per the Associated Press, this past Sunday, Iraq announced that it had reached a deal with Russia, Syria, and Iran to begin sharing "security and intelligence" information about ISIS. Iraq...the country we freed is now aligning with Russia, Syria, and Iran...all America's enemies...making all the American blood spilled now to be proven to have been in vain.

And when one truly understands that it's been Obama's inept and so misguided policies that have directly created even more of a regional power vacuum that is being filled only by militants, terrorists, and jihadis then there was before he took office, Putin's saying that, "We think it is an enormous mistake to not cooperate with the Syrian government and its armed forces. No one but Assad's armed forces and the Kurdish militias are truly fighting ISIS and other terrorists in Syria,” would be a mute point for if Obama had butt out of the sovereign nation of Syria's civil war coupled with the fact that as bad as al-Assad might be, he was and is NOWHERE near the savage that those supporting ISIS are, and would have in time put a halt to the violence and still escalating civilian death toll.

Remember, the Syrian people under Bashir al-Assad were quite content with his secular run government...a government that was able to keep what few islamists there were in check. Now thanks to Obama and crew, the islamists are slowly but steadily infiltrating the country en-mass, and if al-Assad falls Putin knows a domino effect NOT seen before will begin...first Lebanon will fall and then Jordan, and it will move on from there into the currently more stable Gulf states who will fall one after another as well.

Simply put, Vladimir Putin laid out well why he has Russia supporting Bashir al-Assad ...why he now wants a Russian-led coalition to do what Obama has NOT done...and know that he nailed it when saying that, "Far from learning from others' mistakes, we keep on repeating them. It suffices to look at Middle East and North Africa...Rather than bringing about reform, foreign interference has resulted in...violence, poverty, and social disaster”...words of truth that few, especially Obama, want to hear.

And so the Russian Bear...the statist trying to rebuild an empire...has again personally triumphed over an American traitor...a sad excuse of a president out to destroy a republic...who was publicly humiliated into acknowledging and accepting Russia's new and ever-expanding role in the Middle East, and doing so during his speech at the U.N. Saying that he was well prepared for America to work with both Russia and Iran to solve the crisis in Syria, Obama tried to 'save face' both for himself and for America by adding that “the U.S. will work with Russia, Iran for 'transition' from the tyrant' al-Assad.” Translation: Putin will call the shots and Obama will have the U.S. acquiescing to his every wish.

So, in NO uncertain terms, Obama is once again both capitulating and surrendering our beloved America to an enemy, but what's different this time is that it's to an enemy who is smarter, more cunning, and way more cleverly conniving then he will ever be, for this enemy is led by an individual named Vladimir Putin who is more of a man than Barack HUSSEIN Obama can ever hope to be.
Posted by Diane Sori at 12:00 AM No comments: