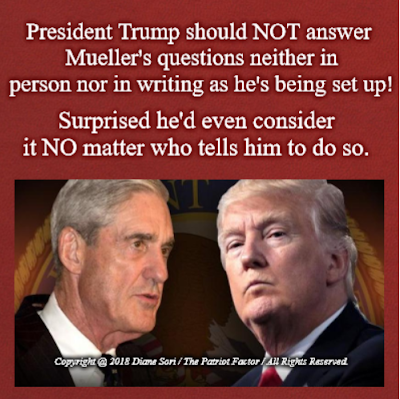 Posted by Diane Sori at 7:21 PM No comments:

“[John] McCain’s funeral seems to be shaping up as the Washington Establishment’s response to Trump. Wonder if it’ll have a lasting impact.”

So wrote Wall Street Journal correspondent David Wessel on Saturday morning, reacting to the fact that the late Senator’s funeral rites seemed to be essentially about “two things” - as political comedian Tim Young put it via Twitter - “Remembering Sen. McCain and hating on Trump.”

“From the reporting on it, it seems the latter was sadly more important than anything else,” continued Young.

“There has never been quite such a spectacle against a sitting president,” tweeted Financial Times columnist Edward Luce.
“Watching the endless, days on end, 24/7 coverage of the moving memorials and ceremonies for American hero John McCain, realizing that if he were a strong Trump supporter, this would only get a 90 second piece once every few hours and very few celebrities in the crowd,” tweeted radio host Mark Simone.
Read more »
Posted by Diane Sori at 7:43 AM No comments:

Germany: Thousands protest on behalf of the victims of “killer migrants”
By Christine Douglass-Williams / Jihad Watch

Thousands of protesters staged a ‘mourning march’ in Chemnitz for people believed to have been killed by migrants, following the fatal stabbing of Daniel Hillig. Kudos to the thousands who attended this march, and to “the anti-mass migration Alternative for Germany (AfD) party and the PEGIDA movement” for remembering and caring about the true victims of […]
Read in browser »

The left-wing radical Andrew Gillum has opened a 5-point lead against Rep. Ron DeSantis. Gillum also raised a staggering two million dollars, 48 hours after his nomination victory. Not bad for a socialist whom many Republicans dismiss as unelectable.

Read entire article here: https://gellerreport.com/2018/09/rep-desantis-says-florida-gubernatorial-race-is-huge-in-national-politics.html/
Posted by Diane Sori at 7:27 AM No comments: