Reward Organ Donors, And Thousands Of Lives Will Be Saved

Howard Broadman is a retired California judge with an active private practice as an arbitrator. He is also the grandfather of a little boy named Quinn, who was born with serious kidney problems. In time Quinn will require regular dialysis to stay alive until he’s eligible for a kidney transplant. Broadman would gladly have donated one of his own kidneys to save his grandson’s life. But Quinn is still too young for a transplant — and by the time he’s ready, his grandfather will be too old.

So Broadman, together with transplant surgeon Jeffrey Veale, proposed an arrangement to the UCLA Medical Center: He would donate a kidney to a patient who needs one now, in exchange for a “voucher” that Quinn can use when he needs a transplant in the future. UCLA not only agreed to the proposal, it inspired 10 other hospitals around the country to offer the same arrangement to potential kidney donors: Save a stranger’s life today so your loved one’s life can be saved in the future.

Veale hopes that if Broadman’s brainchild spreads, the waiting list for kidney transplants may at last begin to shrink. For years that list has been growing, and the death toll from kidney failure with it.

Well, it appears feuds between nations don’t end with the Olympics, though historically the games were meant to such hostilities to cease—at least temporarily for this epic athletic event. For the Israeli and Lebanese teams, things got a bit heated at the outset when the latter refused to ride in the same bus (via Times of Israel):


“I kept on insisting that we board the bus and said that if the Lebanese did not want to board as well they are welcome to leave,” Udi Gal, the Israeli sailing team trainer, wrote in a Facebook post Friday.

“The bus driver opened the door, but this time the head of the Lebanese delegation blocked the aisle and entrance. The organizers wanted to avoid an international and physical incident and sent us away to a different bus.”

So far, no official response on behalf of the delegations was given regarding the incident. The Olympic organizing committee has not yet offered any statement about the incident either.

So, I guess the silver lining is that no fights broke out—and the publication added that Israel has the largest delegation in its history in Rio. Still, it was a rather disgusting lack of sportsmanship on behalf of Lebanon.

“There was a huge campaign aimed at releasing Hamyd, who was then a teenager, with classmates eventually providing an alibi then led to him being released without charge.” He was touted as a victim of “Islamophobia.” Now he has been arrested for trying to join the Islamic State. Once again we see the hollowness of […]


While the enemedia goes after Trump with a vengeance unseen since Der Stürmer went after the Jews, Hillary Clinton’s war crimes and treason rage on unremarked by the mainstream echo chamber.

In a shocking bombshell, it was revealed today that Hillary Clinton recklessly discussed, in emails hosted on her private server, an Iranian nuclear scientist who was executed by Iran for treason.

The Obama/Hillary administration is at war with this country in collusion with the left elite in media.

The Obama/Hillary administration partners with this axis of evil to fund (in the billions of dollars) and enable their nuclar weapons program.

“This person who had access to the country’s secret and classified information had been linked...

VLADIMIR PUTIN: “I swear, if they (the Islamic State savages) ever bomb Russia, in half an hour every Muslim will die”

Noscomunicamos  The Russian leader is reportedly mounting an enormous military mission to take control of the ISIS terror group’s stronghold of Raqqa. The city is the self-declared capital of ISIS in Syria and is patrolled by as many as 5,000 jihadi members.

Putin is set to mobilise 150,000 reservists who he conscripted into the military in September.  Following the Paris attacks, Putin hinted he was ready to join forces with the West to tackle Islamic State. He told David Cameron: “The recent tragic events in France show that we should join efforts in preventing terror.” 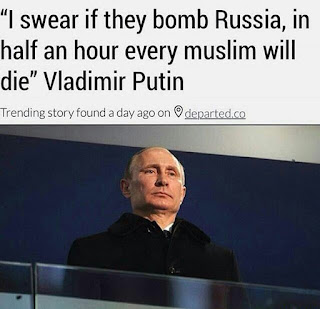 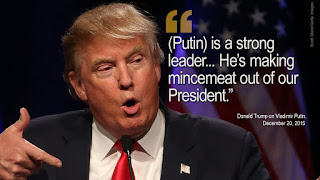 DONALD TRUMP: “What he said.”