Thanks to Obama and the 85 Republican sellouts... 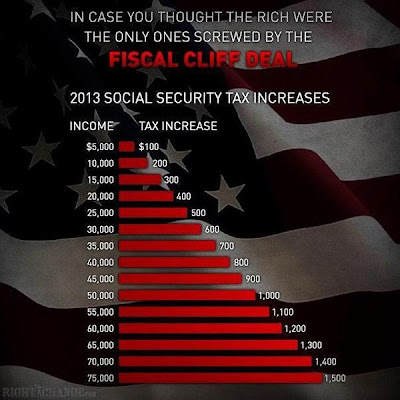 Posted by Diane Sori at 9:45 PM No comments: Links to this post

1. Illegal aliens are here illegally.
2. Pro-domestic employment is indispensable.
3. A strong military is essential.
4. Special interests must be eliminated.
5. Gun ownership is sacred.
6. Government must be downsized.
7. The national budget must be balanced.
8. Deficit spending must end.
9. Bailout and stimulus plans are illegal.
10. Reducing personal income taxes is a must.
11. Reducing business income taxes is mandatory.
12. Political offices must be available to average citizens.
13. Intrusive government must be stopped.
14. English as our core language is required.
15. Traditional family values are encouraged.
16. Politicians MUST represent us, not special interest or their own party
17. The Constitution MUST be upheld and not circumvented.

Posted by Diane Sori at 9:42 PM No comments: Links to this post

WASHINGTON, DC -- Obamacare contains 20 new or higher taxes on American families and small businesses. Arranged by their respective sizes according to CBO scores, below is the total list of all $500 billion-plus in tax hikes (over the next ten years) in Obamacare, their effective dates, and where to find them in the bill.

*Other unearned income includes (for surtax purposes) gross income from interest, annuities, royalties, net rents, and passive income in partnerships and Subchapter-S corporations.  It does not include municipal bond interest or life insurance proceeds, since those do not add to gross income.  It does not include active trade or business income, fair market value sales of ownership in pass-through entities, or distributions from retirement plans.  The 3.8% surtax does not apply to non-resident aliens. (Bill: Reconciliation Act; Page: 87-93)

Individual: Anyone not buying “qualifying” health insurance as defined by Obama-appointed HHS bureaucrats must pay an income surtax according to the higher of the following


Exemptions for religious objectors, undocumented immigrants, prisoners, those earning less than the poverty line, members of Indian tribes, and hardship cases (determined by HHS). Bill: PPACA; Page: 317-337
Employer: If an employer does not offer health coverage, and at least one employee qualifies for a health tax credit, the employer must pay an additional non-deductible tax of $2000 for all full-time employees.  Applies to all employers with 50 or more employees. If any employee actually receives coverage through the exchange, the penalty on the employer for that employee rises to $3000. If the employer requires a waiting period to enroll in coverage of 30-60 days, there is a $400 tax per employee ($600 if the period is 60 days or longer). Bill: PPACA; Page: 345-346

$15.2 Billion: High Medical Bills Tax (Takes effect Jan 1. 2013): Currently, those facing high medical expenses are allowed a deduction for medical expenses to the extent that those expenses exceed 7.5 percent of adjusted gross income (AGI).  The new provision imposes a threshold of 10 percent of AGI. Waived for 65+ taxpayers in 2013-2016 only. Bill: PPACA; Page: 1,994-1,995

$4.5 Billion: Codification of the “economic substance doctrine” (Took effect in 2010): This provision allows the IRS to disallow completely-legal tax deductions and other legal tax-minimizing plans just because the IRS deems that the action lacks “substance” and is merely intended to reduce taxes owed. Bill: Reconciliation Act; Page: 108-113

Posted by Diane Sori at 9:19 PM No comments: Links to this post 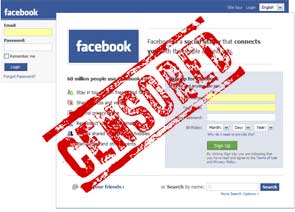 “Congress shall make no law respecting an establishment of religion, or prohibiting the free exercise thereof; or abridging the freedom of speech, or of the press; or the right of the people peaceably to assemble, and to petition the Government for a redress of grievances.”

The First Amendment...the very thing that separates our country from all others...the very thing that guarantees our freedom to speak our minds...to say what we wish without fear of reprisal...or so we always thought...that is until FaceBook came along to take that right away...and there is NOTHING legally we can do about it.

Over the past few days, starting with we conservative bloggers, and yesterday funneling down to regular conservative posters as well, FB started censoring us by NOT allowing us to share our blogs, posts, or comments with those we normally do. Many could NOT post more than a few things or even one thing a few times before a warning popped up telling them to stop or risk being banned for x-number of days. And this has even happened to those who only share back to their own sites and Timelines as well.

And lets NOT forget the infamous 'captcha' that FB made part of the process...part of the hoop they made us jump through to get anything posted...before arbitrarily deciding we've posted enough and that now the time has come for us to be booted off or spend some 'quality' time in FB jail.

The unfortunate part to all this, besides preventing us from speaking our minds, is that with FB being a private company (meaning it's NOT owned or operated by the government) the First Amendment does NOT apply as it only restrains the government from interfering with 'free speech' and does NOT have any say over a private company, even when said company is now trading on the public stock market.

Grrrrrrrrrrrr.........banging head on wall out of frustration because we know exactly why FB is doing this ONLY to us conservative bloggers and posters and NOT to any liberal bloggers or posters...it's because we speak the truth about this corrupt and traitorous administration...it's because we refuse to bow down to the media hyped 'supposed' savior of us all...Barack HUSSEIN Obama.

And as angry as we get when FB bans us, boots us, sends us into time-outs like we're a bunch of little misbehaving children, or even just denies us posting rights for a certain amount of time, for no other reason than they disagree with our conservative blogs or posts, it is indeed something they can legally do.

But just because it's legal doesn't mean it's right nor does it mean that we have to surrender and take it.

So I say rest assured, dear reader, this will backfire on FB because we bloggers have started getting the word out that there are other venues besides FB to post our conservative writings on...venues that do NOT censor content nor stop you from posting as many times as you wish...venues that have NO ties to Obama and his cohorts as FB does...venues that are NOT in the tank with the left-leaning liberal media who do nothing but spout off the typical 'liberalspeak' of this administration.

In other words we conservative bloggers and posters can and will cause FB damage where it hurts...in their pocketbook because as word gets out about what they're so wrongly doing people will hesitate to buy their stock...their stock value will go down as the FB venue loses members and we'll smile...for while they alone 'built' this unfortunate situation, we conservatives will be the ultimate victors over it...for the bottom line is that by censoring we conservative bloggers and posters FB has created an angry united force, a force I am proud to be part of, a force who have stated in NO uncertain terms that FB will NOT silence us NO matter what obstacles they throw in our way.

And as we turn those obstacles in our favor, we'll laugh when FB realizes...what the hell did we do!

As George Washington told a group of military officers in 1783, "If freedom of speech is taken away, then dumb and silent we may be led, like sheep to the slaughter."

Well guess what FB...we conservative bloggers and posters 'aint going to be slaughtered any time soon.
Posted by Diane Sori at 12:09 AM 6 comments: Links to this post