But relax: Obama says the refugees are no more threatening than tourists. “Report: al Qaeda Terrorists Entered United States Through Refugee Program,” by Ali Meyer, Washington Free Beacon, November 18, 2015: Two al Qaeda terrorists who had killed American soldiers were able to enter the country as refugees, according to a report released Wednesday from […]

While Paris slowly recovers from the islamic nightmare that visited the 'City of Lights' just one week ago today, and while Vladimir Putin's Russia and the French government under President Francois Hollande form an alliance of sorts to annihilate the enemy known as ISIS, Barack HUSSEIN Obama moves forward with his plans to have 10,000 Syrian anything-but 'refugees' brought into our country unvetted and unmonitored post-haste.

And while some here in America are calling for the closing of all mosques believing they are the breeding grounds for all terrorist acts, what must be understood is that mosques in and of themselves are NOT the problem for a mosque is but a building used to plot and plan we infidel's demise, and if NOT a mosque any building will do. What is the true breeding ground of all terrorist acts is what lies at the heart of islam...what lies at the heart of all the hate...and that is NOT a building but the qur'an itself for the qur'an commands its followers to do what they do.

The qur'an...the muslim's anything but holy book...leads the way for all the horrors that follow. You can shut down the mosques...you can dismantle or bulldoze them into the ground...but that will NOT stop islamists from doing what they do as long as the qur'an exists as the guiding force in all muslim's lives. And with pages that state that allah commands...that allah orders...all followers to “cast terror into the hearts of those who disbelieve” (3:151) it's the qur'an itself that breeds the hate now engulfing the world with its call to jihad; with its words about subjugating all who do NOT bow to allah; and with its words to wage war...to kill, to behead, to set on fire...all non-believers. And it's the qur'an itself that states in Sura 9:5 “And when the sacred months are passed, kill those who join other gods with God wherever ye shall find them; and seize them, besiege them, and lay wait for them with every kind of ambush.”

And yet some still insist that the qur'an is NOT the problem...that it's the mosques that are the problem...NO matter that there are at least 109 verses of death within the qur'an's pages like the two cited above...NO matter that its words speak of allah sending to hell all muslims who do NOT partake in the slaughter. And with the qur'an's prime focus being on violence...on evil...and with islam's followers showing blind allegiance to the qur'an's words...its easy to see how this most unholy of books has spurned on hate, despair, violence, and death ever since (I believe) a delusional madman thought himself to be a prophet...a prophet of a made-up god he called allah...ever since that man...ever since muhammad... became allah's alter-ego, if you will, and his follower's became allah's blood warriors.

And while I personally do NOT believe islam to be a religion in the same vein as the great religions of Christianity and Judaism, as I believe islam to be a political system, a cult if you will, that wraps its tentacles around its followers and every aspect of their lives until it squeezes the very life blood out of them, unfortunately over 1.5 billion people worldwide, including around five million muslims here in America, do consider islam to be one of the world's great religions. And some of those people believe islam's call to jihad can simply be stopped by shutting down a building...and how wrong they are.

So how do we stop the killing that seems to have become what some refer to as the 'new normal' done in the name of allah besides the obvious solution many of us see and applaud as the only way to stop the cult of islam...to stop groups like ISIS who operate in said cult's name...as in bombing the jihadis and fundamentalists back to the 7th century from whence they came. First, we must NOT only admit but believe in our hearts and then say out loud for all to hear that we are at war with islam...that we are engaged in a world war with all of islam...for this is a war of civilizations...of good vs. evil...of right vs. wrong...and in that war there can only be one victor. And if we insist on ignoring the truth of who that enemy is then we will lose this war and the world as we know it is doomed.

Second, while it's obvious that we must NOT allow any person...whether man or woman...who goes to the Middle East to train and/or fight alongside the enemy to return to any civilized country as they have now joined the ranks of the enemy. And we must NOT allow any young muslim man or woman...as most if NOT all jihadis are young muslim men and to some degree young muslim women...from any Middle Eastern country to enter our civilized countries, because their very presence endangers the 'health, safety, and welfare' of the citizens of said civilized country...and protecting those principals is a government's paramount duty whether here in America...where Obama won't even say let alone admit who the enemy is...or into the nations of Europe...for to do otherwise is treason against that country and its citizens.

And most importantly islam must undergo a reformation if it is to survive in any form...NOT a surface reformation but a true reformation of its totalitarian ideologies as that of the sort that both Christianity and Judaism have long ago undergone. And that reformation must be two-fold ...both religious and governmental...starting with governmental and building upon the premise that those following islam must NOT exploit the legal systems of the countries where its followers live. And it must then expand into the reality that its followers must intergrate themselves into the fabric of said country's society NOT the other way around, meaning islam's followers must NOT make free citizen's bend to its rules, but islamic followers must bend to and accept the rules, laws, and culture of their host country, both in all matters public as well as in the schools that teach their children. And most importantly, the laws of said host country...NOT sharia law with its many untenable demands...must be the binding law they follow in both their daily and personal lives. 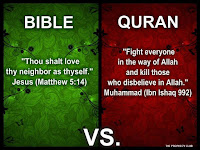 Second and most importantly, and especially with most if NOT all of terrorism in today's world being committed in the name of islam...being done as commanded to do so by the qur'an...islam's followers as dictated to by the mullahs and imams...the supposed holy men who do nothing but drive islamic radicalism forward...must revisit their anything but holy book and in a sense turn it 'holy' ...as holy as the Bible is to those who of us who believe in the one true living God of the Christians and the Jews. In other word's the qur'an must be purged of its basic inherent tenet that all who do NOT follow...that all who do NOT believe...are worthy only of death...NO matter that the purists will cite muhammad's teachings and words, and insist on NO deviation whatsoever from them.

In other words, the mullahs, imams, and the qur'an itself must offer to its followers an alternative to muhammad 's war-driven and subjugating vision of islam for NO ideology must be able thrive where there exists NO such things as liberty, equality, or free will. Nor can islam in its present form be considered a true religion in today's world, especially when that ideology continues to call for the death of those who do NOT submit to its ways. Remember, religion is supposed to be a source of comfort...of inner peace...NOT be a weapon of war.

And so-called 'orthodox' islam, complete with its call to war against we infidels, is what appeals to the vast majority of muslims who seem forever caught in the past, and who have sadly been indoctrinated to hate since the day they drew their first breath. They know nothing but hate...they feed on hate...and that hate coupled with bloodshed...always with bloodshed...is what drives their so-called religion forward...ever forward...starting in 632 AD and continuing on to this day.

But what today's followers of islam must understand is that for islam to be considered a true religion in today's 21st century world reformation is a must...a must that includes adapting islam's basic tenets to the world in which we currently live...NOT the 7th century world from which islam was born. And that includes removing from islam...removing from the qur'an itself...all passages pertaining to violent interactions with non-muslims...with we infidels. Purged must be both commands and instructions on how to behead...on how to set on fire...those who do NOT believe for if muslims truly want to live in peace as they so love to claim, the imams must renounce all violence and terrorism done in the name of islam. Instead they must push forward the principles of tolerance, compromise, and co-existence with those who follow religions different from islam. And if islam wants us to accept allah as being a legitimate though different concept of God, they must then accept both Jesus as the Son of God and Moses as a prophet and messenger of God the Father...in other words they must NO longer defame the deities we Christians and Jews hold dear.

And so we have been given warning signs that we in the West must open our eyes to really see, if you will, that we are dealing with enemy combatants who are more than willing to die for their faith, thus making islam more dangerous than we ever suspected. So unless islam is truly reformed it will continue on as is...continue on in hate, blood lust, and slaughter, and will serve well those like Barack HUSSEIN Obama who wish to keep 'We the People' passive, uniformed, and distracted by nonsense so that the jihadis...so that islam...will gain a true foothold within our shores. And that he intends to do, starting with 10,000 unvetted and unmonitored anything-but Syrian 'refugees,' and he intends to do it sooner rather than later...meaning the war has indeed truly begun.
Posted by Diane Sori at 12:00 AM No comments: