Op-ed:
On Paris, On Islam, On Winning the War
By: Diane Sori / The Patriot Factor / Right Side Patriots on http://cprworldwidemedia.net/

The Verse of the Sword, Sura 9:5 (632 AD) “When the sacred months are over slay the idolaters wherever you find them. Arrest them, besiege them, and lie in ambush everywhere for them...”

“We are going to lead a war, it will be pitiless.”
- French President Francois Hollande's words said on November 13, 2015, upon surveying the carnage at the Bataclan Concert Hall

A horrific chain of events for all the world to see...the stuff of one's worst nightmares unfolded in Paris mere days ago as once again the glaring light of truth showed the absurdity of denial under which we now live. Yet the nightmare continues on speaking of questions whose answers... whose truth...hides within plain sight...yet our eyes remain closed as we think fleeting thoughts of how much more we must endure before that nightmare finally wakes us up from the hell on Earth that now engulfs us.

A collective nightmare of islamic terrorist attacks repeating themselves one after another, taking place not only in our country (remember Fort Hood) but in Spain, in England, in Bali, and now in France, and for a few brief moments we open one eye, decry and condemn the acts, and then we roll over and go back to the safety of sleep for in sleep we can ignore the truth that savages are indeed out to kill us all.

To kill us all as the world's great oceans no longer insulate us...and while World War III has now started on the streets of Paris our president rolls out the welcome mat for them to do to us what they did to innocents enjoying the night in the City of Lights. To kill us all as he...Barack HUSSEIN Obama...rushes to increase and speed-up the number of so-called Syrian refugees who are anything but...jihadis pretending to be Christians now to be fast-tracked into our beloved America by his opening new screening outposts in Iraq and Lebanon...even as the State Department admits we have NO way to screen these people as Syria keeps NO databases on its people...and yet some still wonder whose side this man is on.

Whose side is he on...I think most of 'We the People' know for all we have to do is look to America's past to see the truth by looking at wars fought...wars fought and won by the once strongest military on Earth...wars fought and now lost by a military rendered impotent by a commander-in-chief whose middle name says it all.

We have all of that and yet we send those boots to far off lands trained, equipped, and ready to kill 'them' before they kill us, but boots now told not to kill our enemies but to play nice...to be polite and not offend...to go about their mission with hands tied behind their backs so as not to win the war but to do as little harm as possible while trying to win 'the hearts and minds' of those out to kill us all.

Absurd you say yet this is the war...this is the enemy...Obama has America and our allies fighting all while knowing this enemy cannot be killed with kindness... especially when that enemy has no soul...especially when that enemy is called 'islam.' So how do we in the West fight a 'civilized' war against 7th century barbarians now equipped with 21st weapons...we simply cannot...for the only way to fight a war against barbarians is to use but one 'rule of engagement'...that being we must fight to win.

We must fight to win with every weapon at our disposal because we are not just fighting a tangible war, but we are fighting a war against an ideology...an ideology that is anything but a religion. We must fight to win against the cult of death that is islam...a cult that wraps its tentacles around its followers until it squeezes the very life blood out of them. We must fight to win as payback against barbarians...against savages... who came to America on a sunny day over a decade ago and murdered almost 3000 of our countrymen...we must fight to win against those who just days ago came calling in Paris and left to date 132 dead...a 23-year old American collage student among them...and more than 390 wounded...dead and wounded at a soccer game, at a restaurant/bar, at a mall, and in the Bataclan Concert Hall...a concert hall owned by Jews...a concert hall where pro-Israel rallies and Jewish conferences are held...a concert hall used to collect donations for the Israeli Border Police...a concert hall picked solely for targeting because of its Jewish connection.

And so they chose their targets well...an army of maybe a dozen, maybe as few as eight, an army of sorts...with two being 'so-called' refugees from Syria who came to Paris through Greece...who actively took part in bringing havoc and carnage to the City of Lights in coordinated attacks, and still not known is exactly how many assisted them via planning, transportation, and logistical support. And those terrorists who did not die Friday either by their own suicide bombs or at the hand of the police have, for now, slipped back into the darkness...blended back into Europe's populace to remain under cover until called upon to again bring the blood of hell to those who deny their ways.

Slipped back into Europe's populace to carry out beheadings, crucifixions, stonings, rapes, and throwing gay people from roof tops. Barbarians who once flew planes into buildings and who now take down planes with stolen missiles...barbarians who bomb trains and market places just because...barbarians who execute cartoonists and concert goers with automatic rifles, grenades, and bombs...yet barbarians who Obama says we dare not offend no matter that their very ideology preaches genocide...genocide of not only Christians and Jews but genocide of any and all who do not submit to the cult of islam.

And now even after the slaughter in Paris, Barack HUSSEIN Obama still insists on following the politically correct agenda...insists on following the open-borders policies of Europe...and insists we welcome these very barbarians...by the thousands...by the hundreds of thousands...into our civilized nation simply because they claim to be refugees. But the fact is these barbarians are not refugees...they are and will remain jihadis...and they are being sent by their very ideology itself to invade and destroy the fabric of our American society from within, all while the kumbaya sorts and the bleeding heart liberals say that it would be barbaric, immoral, and uncivilized, for America to turn them away.

Just ask Francois Hollande how moral and civilized those barbarians were when so many French hearts bled out because of them. And make no mistake events like Paris will happen here in our beloved America if Obama lets these barbarians... these savages...in. And how do we know...because what happened in Paris was planned in Paris...an inside job if you will...an inside job that could happen on American soil as well as these incoming barbarians...these jihadis...will wake-up those barbarians already here...barbarians 'sleeping' just waiting their turn for their call to jihad.

And with no international chatter being picked up by any intel communities regarding ISIS' plans for turning the streets of Paris red...and with no phone records nor emails to trace their conversations...that means they had to meet face-to-face to set their plans in motion...and meeting face-to-face is what these 'supposed' refugees will do when Obama welcomes them to our shores. And they will plan, they will terrorize, and their actions will allow them to hold sway over the weak amongst us...the masses and the kumbaya sorts...who will be caught like deer in the headlights by acts of terror both tangible and threatening. And if the masses and the kumbaya sorts do wake up to reality and dare to speak out...America's streets too will turn red and the masses will soon be too terrified to fight back against them. And just like the countries of Europe we as well will be held hostage to fear...to fear of not what we know will happen but when and where it will happen next.

And while Obama hears France's cries, and with his seeing the tears rolling down the cheeks of those left behind, this most miserable of men had the nerve to say, “I don’t want to speculate at this point in terms of who was responsible for this”... did not want to speculate no matter that one of the terrorists apprehended stated, “I am from the Islamic State”...no matter that shouts of "allahu akbar" were heard as the slaughter was ongoing. Calling the slaughter "extremism" ...still refusing to say the words 'islamic terrorism'...we must now face the fact that civilization’s most forceful leader against the barbarians is Vladimir Putin...a statist thug from Russia...yet a man willing to take the fight to them. But even that has a caveat attached to it for Putin has allied with Iran...a soon to be armed with nuclear weapons Iran all courtesy of Obama's very bad nuclear deal...and Iran is as much of a problem as is ISIS...a problem Putin knows might come back to haunt 'Mother Russia' as well.

So where do we...where does the world...go next what with America still having a leader who says with a straight face that we have successfully “contained ISIL”...and notice the shout-out to the Levant once again. Who do we and the civilized world look to, to end this nightmare that we can't seem to wake up from. That answer has been shone to us by the happenings in Paris and it's something some of us already knew...we must look to elect a new president come November 2016 who understands that foreign policy and foreign policy alone must be at the forefront of all America now does. America must have a strong leader who will undo the damage Obama has done for he and he alone allowed the birth of ISIS...for he and he alone has created vacuums of power now filled by 7th century barbarians who want to set the word's clock back 1400 years. 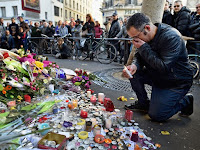 And only with a strong American president who is willing to lead the fight with the enemy's collateral damage be damned...only with a strong American president who will stand by and fight alongside Israel...and know that Israel is indeed a pivotal and critical part of this war...this war of civilizations we now find ourselves in...only then will civilized men win against barbarians...only then will the civilized world's collective nightmare end...and only then will happenings like Paris become lessons learned that we will never allow to happen again.

And if that means wiping this enemy...this enemy known as islam...off the face of the Earth then so be it...as long ago words to the affect that we must "love the sinner but hate the sin" now have been proven to be words best lost to the ages.
Posted by Diane Sori at 12:00 AM 2 comments: