The Senate passed the Coronavirus Aid, Relief and Economic Security (CARES) Act late Wednesday night. The measure passed with a unanimous vote of 96-0 and has a price tag of $2.2 trillion.

The Senate, however, failed to pass the Sasse Amendment which would prevent people from receiving more unemployment benefits than they would if they had a job. The vote was tied 48-48.

Knowing what we do about Iran’s torture of prisoners, it’s amazing he lived this long. Democrats shill for these bloodthirsty barbarians.

Absolutely heartbreaking. For 13 years Robert Levinson’s family showed incredible resilience and courage, in their fight to have Robert released from an Iranian prison. They deserve our prayers, as does Robert.

Smoking, Vaping, and COVID-19
By: Diane Sori / The Patriot Factor / Right Side Patriots

Coronavirus...COVID-19...call it what you will but whatever name it goes by know that self-imposed quarantine works only up to a point especially when word gets out that the newest research is showing that COVID-19 does not spread...I repeat it does not spread...as easily as many experts first thought. So how is it spread...simply stated, the rate of infection is actually based upon the type of contact one has with an infected individual and for how long said contact occurred. In fact, these newest reports are saying that even if you do come in contact with someone actually ill or with someone being a carrier of this particular coronavirus that you have only a 1% to 5% chance of catching said virus or becoming a carrier yourself.

Now for some important medical facts with the first being that most viral infections are passed when one has prolonged exposure while in a confined space with an infected individual...basically meaning that direct person-to-person and surface to person contact is the most common way one gets infected. Second, most viral infections occur within families via airborne or surface droplets especially when a now formally well person has close bodily proximity with an infected person. Third, and this is something not spoken about in the important way that it should be...that is the relationship between cigarette smoking, vaping, and the increase in COVID-19 cases.

Vaping for those unfamiliar with that word is otherwise known as E-cigarettes, with said cigarettes producing a water vapor that's inhaled through cartridges that contain either nicotine, flavorings, or cannabis products along with other assorted chemicals. And when the number of those vaping is added to both the number and the severity of cases regarding COVID-19...more specifically to the across the board number of new cases...we are finding that more and more younger people are being infected by the virus as opposed to the elderly or chronically ill.

But, let's start with the smokers first and the fact that while most of the countries in Europe as well as here in the U.S. might not have the highest number of smokers in the world...that dubious honor goes to the nation of Bhutan...it remains an established fact that more younger people take up smoking than older people do, and that they continue to smoke for more years than those who have stopped smoking due to health concerns. Younger people tend to think they're invincible no matter the fact that tobacco use increases the chances of developing lung cancer, oral cancer, high blood pressure, heart disease, and blood clots as well as it increasing the risk of having a heart attack and/or a stroke...which sadly more and more younger people are having earlier in life.

And with so many countries now seeing a sharp rise in younger people coming down with COVID-19, certain key factors do shed light as to why those countries are seeing such a dramatic increase not only in the overall number of coronavirus cases, but in new cases among younger people who do not fit into the normal pattern of expected victims...victims as in the elderly and those with chronic preexisting conditions such as high blood pressure, heart disease or diabetes.

As of right now three European countries...Italy, France, and Spain...are seeing a rise in both those presenting with and dying from COVID-19...especially among those under the age of forty. And smoking plays a huge part in that particular number where in Spain for example approximately 29.20% of the population smokes; while 27.70% of those in France smoke; and 24% of those in Italy smoke; with younger smokers outnumbering older smokers in said countries. And while here in the United States that number is smaller with roughly 17% of our population being smokers, that still translates into about 50 million Americans who puff away on a daily basis...50 million Americans with those younger than 40 growing in number.

Now add in those who vape...and know that vaping is more popular here than in Europe...a number that has doubled in less than three years...seeing that number, as per a University of Michigan study, going from 11% to 25% among America's 12th graders; up from 8% to 20% among 10th graders; and from 4% to 9% among 8th graders; with these stated age groups not so surprisingly also seeing an increase in those infected with COVID-19.

So is smoking and vaping the real reason for the continued uptick in coronavirus case numbers especially here in our country as well as in younger victims? I believe it is as the very nature of these two acts and the affects both have on the lungs would see logic dictating that those who smoke and/or vape would be more affected by this virus than those who don't. Remember, COVID-19 manifests three ways...either in a milder upper respiratory form being not that unlike a bad cold, in a more severe and quite possibly life threatening form that invades the lungs causing more serious forms of pneumonia, and in some showing no outward symptoms but still being carriers.

So how and why does COVID-19 affect different people differently? We have what is called the mucociliary system that lies within our respiratory system and it's this mucociliary system...a system comprised of thousands upon thousands of hair like particles called cilia...particles whose primary function is to remove all the little so-called “dirties” and “nasties” that always are present in our atmosphere on a day-to-day basis. The problem with smokers is that depending on how much they smoke and for how many years they’ve been doing so, their mucociliary system becomes compromised due to the continuous deposit of nicotine in their airways. This is turn does not and will not allow for the removal of the ordinary mundane so-called infectious agents let along the more severe ones like the virus that causes COVID-19. And to make matters worse, there is no medication nor treatment available that can rebuild a compromised mucociliary system.

This also applies to those who vape as their lungs not only are compromised by small amounts of nicotine but also by the other assorted unnatural ingredients present in E-cigarettes...compromised to such a degree that lung infections in general are increasing in those who vape.

So when the virus presents itself to non-smokers and to non-vapers, those with a totally uncompromised mucociliary system, see the cilia being able to remove and clean their lungs as nature intended. And with as previously stated more young people now contracting COVID-19, both the milder and the more serious lung invading form, it would be interesting to note how many of those younger folk now presenting themselves to the ER’s and to other testing areas are actually smokers and vapers as opposed to non-smokers and non-vapers. And a similar study could be done in Europe as well most especially in regards to the age of cigarette smokers newly diagnosed with COVID-19.

And the all-important bottom line to this is that perhaps smokers in both young and older age groups as well as those using E-cigarettes should be added to the list of those in any given population who are considered more predisposed to the COVID-19 virus. This addition could help head off an unexpected rush by younger people on hospital beds because hospitals would have time to prepare. Simply, smoking of any kind should be added to the list of maladies that contribute to chronic health problems and thus raising the risk factor for contracting this virus...a virus that has now proven not to age discriminate.

But cigarette smoking and vaping aside, none of this negates the fact that the now worldwide outbreak of COVID-19, along with the outright panic it has created, could have been if not halted at least quite drastically reduced if China’s government had not only acted sooner to contain the virus, but if they had been honest about the outbreak's true date of origin itself. In fact, a recent study out of Great Britain suggests that if the Chinese had been forthcoming even by a few weeks, that the virus' worldwide spread could have been reduced by between sixty-six to ninety-five percent.

Remember, the first case officially announcing the ground zero emergence of this new strain of coronavirus...and know that coronaviruses are naturally occurring not some man-made concoction created in a mad scientist's bio-weapons lab...wasn't publicly reported on by Chinese authorities until last November 17th when in actually 266 people had already been infected and were sick weeks before said date. In fact, numerous epidemiologists familiar with current COVID-19 case data believe that the virus made the jump...the cross-species contamination...from animals (it's believed from bats) to humans as early as October, and that Chinese officials knew this and deliberately kept it mum for they knew the panic and the fallout it would create.

And it was this very silence by the Chinese government that allowed unnecessary fear to seep into the public domain as rumors and innuendo became facts which in turn then morphed into conspiracy theories all of which helped sound the panic alarm that our beloved America was now in trouble. And with that alarm being sounded partisan politics was again allowed to rear its ugly head with those on the left hoping said panic would help to destroy America's economy thus sending us into a recession so deep that escalating inflation would force us to see that only socialism could save us. And all over a virus that kills far less people than the ordinary flu does.

So while COVID-19 cases have yet to level off here in this country, I do hope that if nothing else is learned from all this that medical professionals at least add smoking of all kinds to the list of major contributing factors that makes one more susceptible to the virus out of China that has us all currently still sequestered at home...with the cigarette lobby be damned. 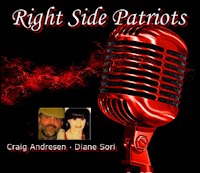 RIGHT SIDE PATRIOTS live broadcasts and podcasts are on hiatus for a few weeks but we WILL be back bigger and better than ever with exciting new changes, features, and format. We'll keep you posted as to the date when we return both LIVE ON AIR and on podcasts!