BREAKING NOW...newest ISIS video shows the second Japanese hostage being beheaded. When will people learn you CANNOT negotiate with terrorists...EVER!

And it seems there is a possibility that he and the Jordanian pilot were executed a week ago and all these negotiations were smoke and mirrors. Time to put a stop to this once and for all...bomb these freakin' savages back to the 7thh century that spawned them...period.

Freakin' savages...and Obama still will NOT say 'muslim islamic terrorist'! Look at this picture long and hard because it's coming here if we don't stop it 'over there.' This is the tangible here and now enemy I speak of...any questions... 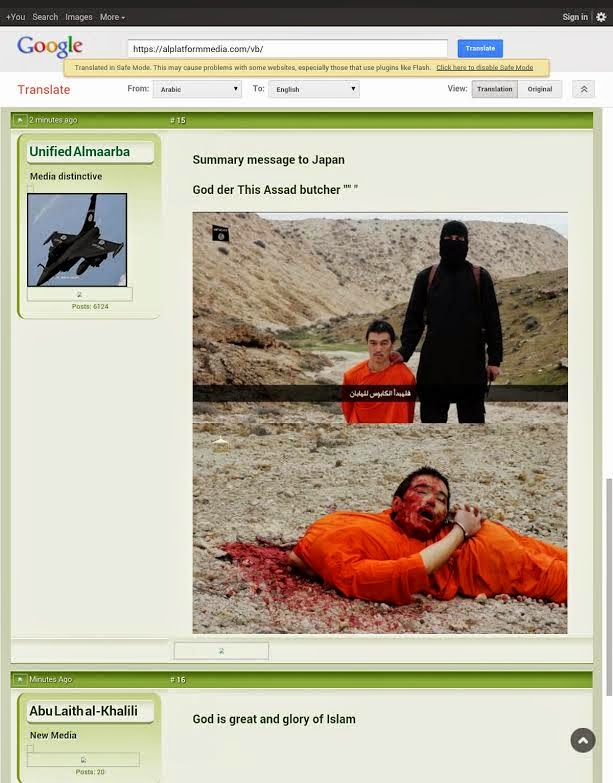 Austerity American-style; is it too early to change the course? Obama wants to ditch sequestration, and he will use the typical talking points. On the White House website, sequestration is being blamed for cuts in after-school programs that will affect 1.2 million kids, along with the elimination of 30,000 teaching jobs, meals for more than four million homebound seniors, and less funding for first responders in local communities.

Of course, the administration does not like to talk about any cuts to spending – spending that includes attempts to make emergency unemployment insurance a permanent fixture.

The left-leaning Economic Policy Institute correlated the expiration of such long-term benefits with a drop in fewer people who were lifted out of poverty.

The Islamic State Sets Its Sights on Egypt

Pakistan: Update. The Ministry of Interior rejected a request by former president Musharraf to travel to Saudi Arabia to pay respects to the late King Abdallah.

Comment: Musharraf remains on the Ministry's Exit Control List (ECL) because of the multiple court actions against him, including treason. A court ordered his name placed on the ECL. The government is serious about bringing him to trial.

Pakistan-US: Pakistani officials and analysts continue their criticism of the US President's deals with India. At a press conference today, foreign ministry spokesperson Tasnim Aslam warned about the implications of the 10-year US-India defense agreement.

Aslam said that "on the conventional side, India's massive acquisition of weapons further complicates regional strategic stability" as India's defense spending had increased by 12 per cent in 2014-15 and stands at US $38.35 billion. (Pakistan's defense budget for 2014-2015 is about US $6.9 billion.)

"India has been the top buyer of arms for the last three years. In this backdrop, the US-India 10-year defence agreement can only add to the conventional asymmetry and hence strategic instability," she said.

The media spokesperson also reported that Chief of Army Staff General Raheel Sharif was in China during the US President's visit to India. The Chinese reportedly promised Pakistan "cooperation in all respects." Aslam said that Pakistan attached great importance to its relations with Beijing because China was a source of peace and stability in the region.

Punjab Province Governor resigned. Pakistan Punjab Province Governor Chaudhry Sarwar resigned on Thursday following a conversation with Prime Minister Nawaz Sharif over his public statements about the government's foreign policy. He said, "Obama's visit to India is a failure of the Pakistan government. The second visit of Obama to India is Pakistan's big failure on foreign affairs front as it should have arranged his visit to Pakistan."

Other reactions by Pakistan included sending messages of moral and diplomatic support to the Kashmiri militants. A Pakistani senator said that Pakistan's historical mistake was to develop close ties to the US and to ignore Russia.

Not only has President Obama insured that the jihad force has nuclear weapons, but Russia finally has nuke superiority over the U.S.

I warned repeatedly in my book, “The Post American Presidency: The Obama Administration’s War on America,“ that Obama would dismantle American hegemony and betray our allies.

American is slouching into a very dark period.

“Obama has agreed to 80 percent of Iran’s demands in nuclear talks, Israeli officials tell Ch. 10,”  Jerusalem Post, (thanks to Van)

Israeli officials told Channel 10 on Friday that they are convinced the Obama administration has already agreed to most of Iran’s demands in the P5+1 negotiations over the Islamic Republic’s nuclear...