Ukraine is in the news and that’s not a good thing.

I’m not a foreign policy expert, to be sure, but it can’t be a positive sign when nations with nuclear weapons start squabbling with each other. And that’s what’s happening now that Russia is supposedly occupying Crimea and perhaps other parts of Ukraine and Western powers are complaining.

Look at this linguistic map of Ukraine. The red parts of the country show where Russian is the primary language and most people presumably are ethnically Russian.

Now look at these maps (from here, here, here, and here) showing various election results in the
country.

Like I said, I’m not overly literate on foreign policy, but isn’t it obvious that the Ukrainians and the Russians have fundamentally different preferences?

But is there a solution? And one that doesn’t involve Putin annexing – either de facto or de jure – the southern and eastern portions of the nation?

It seems there are two options.

1. Secession - The first possibility is to let the two parts of Ukraine have an amicable (or at least non-violent) divorce. That’s what happened to the former Soviet Union. It’s what happened with Czechoslovakia became Slovakia and the Czech Republic. And it’s what happened (albeit with lots of violence) when Yugoslavia broke up.

For what it’s worth, I’ve already suggested that Belgium should split into two nations because of linguistic and cultural differences. So why not the same in Ukraine?

Heck, Walter Williams has argued that the same thing should happen in America, with the pro-liberty parts of the nation seceding from the statist regions.

2. Decentralization - The second possibility is for Ukraine to copy the Swiss model of radical decentralization. In Switzerland, even though there are French cantons, German cantons, and an Italian canton, the various regions of the country don’t squabble with each other because the central government is relatively powerless.

This approach obviously is more attractive than secession for folks who think that existing national borders should be sacrosanct.

And since this post is motivated by the turmoil in Ukraine, it’s worth pointing out that this also seems to be a logical way of defusing tensions across regions.

I confess I have a policy reason for supporting weaker national governments. Simply stated, there’s very strong evidence that decentralization means more tax competition, and when governments are forced to compete for jobs and investment, the economy is less likely to be burdened with high tax rates and excessive redistribution.

Indeed, we also have very strong evidence that the western world became prosperous precisely because the proliferation of small nations and principalities restrained the natural tendencies of governments to oppress and restrain economic activity.

And since Ukraine (notwithstanding it’s flat tax) has a very statist economic system – ranking only 126th in the Economic Freedom of the World index, maybe a bit of internal competition would trigger some much-needed liberalization.

P.S. If you’re intrigued by the secession idea promoted by Walter Williams, you’ll definitely enjoy this bit of humor about a national divorce in the United States.

P.P.S. If you think decentralization and federalism is a better option than secession, the good news is that more and more Americans have unfavorable views of Washington.

P.P.P.S. The tiny nation of Liechtenstein is comprised of seven villages and they have an explicit right to secede if they become unhappy with the central government in Vaduz. And even the statist political crowd in the United Kingdom is considering a bit of federalism.
Posted by Diane Sori at 9:00 AM No comments:

Iranian ayatollah: “Death to America is the first option on our table”

Robert Spencer / Jihad Watch
Here yet again we see the Iranians openly expressing their contempt for America, secure in the knowledge that there is absolutely nothing that they can say that will shake the Obama/mainstream media view that the Iranian regime is now “moderate” and has agreed to a framework for lasting peace.

“Ayatollah Jannati to Iran’s Leaders: The People Do Not Support Your Efforts to Establish Ties with the U.S.,” from MEMRI, February 21 (http://www.jihadwatch.org/2014/02/iranian-ayattollah-death-to-america-is-the-first-option-on-our-table?utm_source=Jihad+Watch+Daily+Digest&utm_campaign=ee3ad36a22-RSS_EMAIL_CAMPAIGN&utm_medium=email&utm_term=0_ffcbf57bbb-ee3ad36a22-123435571):


In a Friday sermon in Tehran, Ayatollah Ahmad Jannati addressed the Iranian leaders, saying: “If we, the people, are against America, you must oppose it too.” “Death to America is the first option on our table,” said Jannati, and the crowds responded with chants of “Death to America.”

Following are excerpts from the sermon, which was broadcast on Iran’s Channel 1 on February 21, 2014:

Ayatollah Ahmad Jannati: One of our slogans this year has been: We are excited that all options are on the table. In other words, we are laughing with contempt at America. Who are you trying to intimidate?
[...]

We say [to the Americans]: Come if you are real men. This has been the message of our people: We are excited that all options are on the table. But what are the options on our own table? Death to America is the first option on our table.

Ayatollah Ahmad Jannati: This is the slogan of our entire people without exception. This is our number one slogan. There have been other slogans and messages. Our message is unity.

If we, the people, are against America, you [Iranian leaders] must oppose it too. The people cannot go one way, while you go the other way. There are some individuals in this country who are building an underground network, in order to establish ties with America. I don’t know what they drank from America’s goblet that they are so eager to follow them.
[...]

First of all, you should know that what you are doing is futile. Whatever secret meetings you attend and whatever messages you exchange – the people are not with you, and nothing can happen before the people wants it. The entire people is behind the Supreme Leader.
[...]

They tell us that we must compromise on the nuclear issue. They tell us to stop our missile program. Who gave you permission to tell us what to do? Who gives you the right to interfere in our country’s affairs? What business do you have with our missile program? We must have defensive capabilities. Are we supposed to get rid of these capabilities, so you can attack us at will?

Email ThisBlogThis!Share to TwitterShare to FacebookShare to Pinterest
A teaser photo from the Great Awakenings Rally... 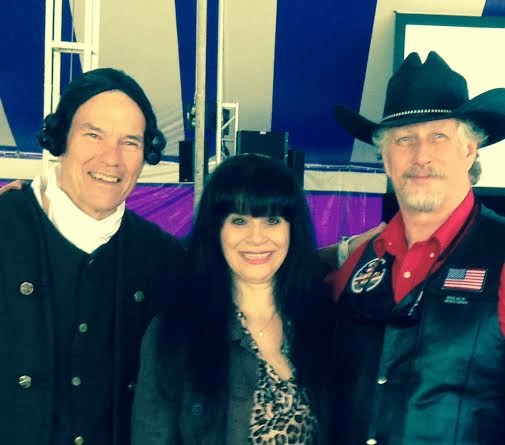