Last week, Jimmy Kimmel, the late-night talk show host with a terminal case of Trump Derangement Syndrome, wanted to host a segment with voters who oppose DACA. To find willing guests, ABC casting had reached out to me and fellow Trump supporters to appear on the show. At first, I was reluctant. Kimmel uses every shame-inducing prop imaginable to attack President Trump and conservatives in general. I reached out to a friend and fellow activist, Robin Hvidston, director of We the People Rising, for advice. She encouraged me to go with her and four others: Chanell Temple, Wes Parker, Lorie Masonas, and Celeste Grieg. All of us know each in other conservative circles throughout Southern California.

On the recording date, immediately I noticed along the entry corridor all kinds of photos with Kimmel’s favorite guests and craziest moments at the studio. The most prominent photo portrait featured Kimmel shaking President Barack Obama’s hand at a state dinner. I decided to fix the picture (see above).

After a brief "rehearsal," we finally met Jimmy Kimmel who interviewed each of us about the program. I told him that nearly 50% of DACA recipients are fraudulent, and illegals commit proportionally more crime than Americans. He finished our brief interview with: “I want you to meet somebody.”
Read more »
Posted by Diane Sori at 8:56 AM No comments:

King Abdullah of Jordan: “Maybe there’s a lack of understanding of Islam” in Washington
By Robert Spencer/ Jihad Watch

There is indeed a lack of understanding of Islam in Washington, but not in the way King Abdullah is claiming. Abdullah said: “It is not a religion of hate. We as Muslims believe in Jesus Christ as the Messiah. We believe in the Holy Virgin Mother. We believe in the Bible and the Torah, and […]
Read in browser »

Posted by Diane Sori at 8:49 AM No comments: 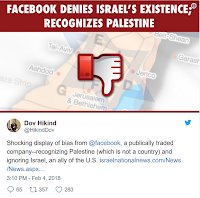 This is Stalinesque. Now Facebook is rewriting history in submission to decades of Jew-hating jihad.

We must organize and move quickly for government action against these social media monsters. My friend Representative Dov Hikind is leading the charge. “Palestine is not even a country.”

Read: The Urgent Case for Legislation against Facebook and Google

When creating a background profile on Facebook, users are given 50 nationality options. These options include Palestine, while Israel is conspicuously absent.

Read entire article here: https://gellerreport.com/2018/02/facebook-jihad-4-palestine.html/
Posted by Diane Sori at 8:43 AM No comments: