Hillary is Running...Hillary Must Lose

BREAKING...it's official...she's running...
Hillary is running for president and we must stop
her from winning or all we as Americans hold dear will be lost...period.
Have my first Op-ed against Hillary ready to go at midnight tonight.
This is her logo and I can tell her where she can stick that arrow...LOL

Posted by Diane Sori at 4:49 PM No comments:

First of thousands of Syrians Resettled in ….. North Texas

The FBI admits that they cannot properly screen the Syrians, while the US State Department is telling the media that 10,000 Syrians will be here soon. Syria, home of the Islamic State.

And while the genocide of Christians is ongoing in Syria, over 90% of the Syrians who are being brought to America are Muslims. It’s a catastrophe. The top five states targeted for Syrian Muslim resettlement are California, Illinois, North Carolina, Pennsylvania and Texas.

Meanwhile, dozens of American jihadis who fought in the war in Iraq and Syria have returned to the United States, equipped with the training they used fighting either for or against ISIS, according to one federal official.

Bowing again to the enemy...Obama meets and shakes hands
with Raul Castro but refused to meet with our ally
Benjamin Netanyahu...how far we have fallen under this man...
the man who said, "I'm NOT interested in battles
from before I was born"...sigh... 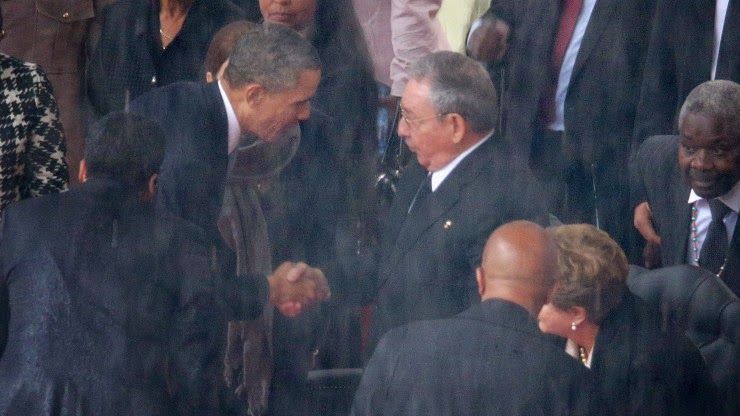 Democrats do not want a coronation, but sometimes you can’t always get what you want. Hillary Clinton is announcing her 2016 bid this Sunday–and the nomination is all but locked up for her. Nevertheless, a new Bloomberg poll found that 72 percent of Democrats and Independents want a competitive Democratic primary. Yet, it’s highly unlikely that a serious challenger could launch a successful insurgent candidacy a la Barack Obama this cycle; most of the possible candidates mentioned as potential 2016 primary challengers to Hillary have crumbled.

Vice President Joe Biden has been traveling to the right spots, but he has zero campaign infrastructure set up at the moment. However, a Draft Joe movement did emerge in the past few weeks. Right now, former Maryland Gov. Martin O’Malley seems to be the one poised to offer a Democratic alternative to Clinton in 2016. Two things continue to plague the Clinton team. One, the email controversy appears to be huge deal with voters, with 53 percent saying Clinton has not been truthful regarding disclosing all the details relating to her private emails address and server. Second, gender doesn’t seem to play an issue; 83 percent said it didn’t make a difference if she could become the first female president. Only 12 percent polled were more inclined to vote for her because of that fact:


As Clinton prepared to formally announce her candidacy on Sunday, nearly three-quarters of Democrats and independents in the survey said it would be a good thing for the Democratic Party if she were to face a "serious" challenger for the nomination. Democrats and independents hold the same view, with 72 percent of both groups saying her party would be best served by a robust primary.

The truth about employment statistics is ugly when laid out in black and white.

Last month, the U.S. economy added a mere 126,000 jobs, the weakest growth in more than a year. These were disappointing numbers. The Washington Post reports economists had expected employers to have added 245,000 jobs in March.

But what’s even more shocking about these figures is who is getting those jobs.

Essentially, as Tyler Durden notes on ZeroHedge, “The labor force has been turned upside down, and the only jobs being created are those for aged workers.”

What accounts for these wildly skewed statistics? Why are younger workers losing jobs in droves while older workers are gaining so many positions?

Many older workers are still in the workforce because they aren’t confident they’ve saved enough to live comfortably during retirement. More than half admit they’re not saving as much as they should, simply because they can’t afford it with the high cost of living.

Additionally, savings vehicles have altered. Employer-provided defined benefit pensions are nearly a thing of the past, making early retirement less affordable. Many retirement and savings plans took a severe hit during the recent economic downturn, a hit that was particularly devastating for those nearing or already in retirement.