By Jodi Fowler / Editor of the Conservative Nexus

With a mere few days left until the most important presidential election of our lifetimes, Hurricane Sandy is taking precedence in the media over the importance of uncovering the Benghazi Consulate attack truths and cover-ups regarding the horrid murders of Ambassador Chris Stevens as well as two former Navy Seals and a fellow patriotic American. But, then again, mainstream media hasn’t paid much attention to Benghazi at all, only a smattering mention.

Mind you, this incredibly huge and destructive hurricane striking northeastern states, leaving millions without water, electric power, shelter, and food is devastating and well deserved of media attention. And, after all, President Obama was politically astute enough to take a couple of days to off his ever-so-radical campaigning ambitions to do ‘whatever’ besides going to New Jersey for a few hours to view the resulting damage therefore to act “presidential,” but still, only in a campaigning-like mode.

“We leave nobody behind,” said Obama, in New Jersey.  Really? Then why did you leave four Americans ‘behind’ in Benghazi to be slaughtered? Seems lately the more that is denied, the more facts are revealed.


But, Barack Obama waited seven days to visit Joplin, Missouri after a tornado wiped out half of the town and killed 120 people.

But, Barack Obama waited 14 days to visit the Gulf Coast after the BP oil spill.

But, Obama ignored the Texas wildfires when over 400 homes were lost.

But, it took Barack Obama only one day to visit the Hurricane Sandy damage in the northeast.
Then again, there’s an election next week.


And, of course, Obama ignored the calls for help from Benghazi.

Yes, Benghazi is still alive and of the highest importance in the minds of Americans. Benghazi is being kept alive by dedicated journalists via Fox News, internet blogs and websites, and social media such as FaceBook, Twitter, LinkedIn, and many others. Americans are outraged and committed that this cover up should not die. The truths behind these four men’s murders must be uncovered, and those responsible must be held accountable. Now, new information is tying this unspeakable act straight to the Oval Office.


According to Catherine Herridge of Fox News, “The U.S. Mission in Benghazi convened an ‘emergency meeting’ less than a month before the assault that killed Ambassador Chris Stevens and three other Americans, because Al Qaeda had training camps in Benghazi and the consulate could not defend against a ‘coordinated attack.’”

Carl Gallups, on his Freedom Friday radio show recently interviewed Jeffrey T. Kuhner, a Washington Times contributor, who said, “CIA operatives have now confirmed by the administration to hold back and not come to the rescue of Ambassador Chris Stevens or the other threeU.S. officials that were butchered in Benghazi on September 11th.” (Hear interview transcript.)

Also the Middle East Research Institute (MEMRI) recently posted a disturbing video about documents found by ALAAN TV at the U.S. Consulate in Benghazi reaching out to the Benghazi police department on the day of the attack. A Consulate car was set afire and a member of the Benghazi police was seen taking photographs inside the Consulate. And, Ambassador Stevens was asking for increased protection in which he was ignored.

Also, on the same day, the White House and the office of Secretary of State Hillary Clinton were notified via email from Ambassador Chris Stevens of the increasing Al Qaeda violence pleading for increased protection…but that request was also ignored. Yet, for weeks Obama and his administration blamed the unrest in Benghazi and resulting murder of our Ambassador and three other patriots on a stupid unrelated YouTube video.

What are you hiding President Obama, and, why? America, we need answers. America is tired of your lies and cover-ups. And, you mainstream media outlets with your pseudo-journalistic farcical coverage, why are you playing the role of co-conspirator in this unspeakable, deceptive scheme?

Lockheed Martin is laying off 123,000 workers just weeks before Christmas and this needs to go far and wide before Early Voting finishes.

The President is trying to hold off any announcement until after the election. This will make a significant increase to the questionable 7.8 % Unemployment number.  As of today that number has gone up to 7.9%.

Lockheed is going to lay off 123,000 defense workers due to Obama's downsizing of the military. This hit the Drudge report yesterday. This is true! I checked it on Google

The law requires Lockheed to give 60-day notice to all to-be-fired employees within 60 days. That drop dead date would be November 1st. Since this would be devastating for his reelection, Obama has promised that our government would cover all Lockheed severance packages tofired employees if Lockheed would not release the names and locations of those losing their jobs until after the election! Do you have any idea how many millions that will cost the taxpayer? Thank you Obama!!

This posting is from a defense contract newspaper called The Hill. You can read the details below:

Posted by Diane Sori at 6:51 PM No comments: 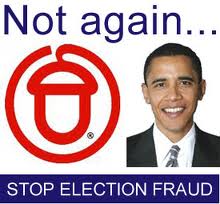 Voter fraud...a fact of life in Obamaland as the usurper-in-chief will try to steal this election just like he stole the last.

Voter fraud has been a thorn in the side of the political savvy since Obama's first election, because they know that people can easily register under the names of the dead, double register, vote twice, or even vote without citizenship, compromising the democratic voting system ‘We the People’ hold dear.

But Obama’s people say voter fraud is exaggerated and nonexistent.  NO, voter fraud is real...very real and voter fraud schemes can swing elections as phony ballots tip races, hell...they FIX races, all across this country.

We must ensure the integrity of our election process by insisting on voter identification.  Voter ID works, especially when both photo ID and matching signatures is used.  Yesterday I saw that action firsthand.

As a poll watcher for Early Voting in my state of Florida, one thing that was stressed when we trained was the integrity of the vote, and that it would be in our power as poll watchers to question if a vote seemed ‘NOT right’ by bringing it to the attention of the poll supervisor who would have to handle it immediately, including getting the Board of Elections (and the police if trouble ensued) involved if need be.

In Florida a person MUST show a valid (as in current) driver’s license that has both their photo and their permanent address on it.  The license is then run through a computer for verification BEFORE they will be handed a ballot.  And what most don’t know is that it will also show if they have already voted.

Thank you Governor Scott for that one.

Anyway, I watched a man came through the line with a lady who I believe was his girlfriend, and both handed the registrar their licenses.  The lady’s license went through with NO problem but the man’s showed he had already voted!  I was close enough to witness this as the man started getting jittery and said he’d forgotten he’d already voted...yeah right.

Of course I immediately questioned what was going on and stood there until I saw the man handed back his license and NO ballot.  Could this have been reported...yes...and the man would have been in big trouble but the registrar chose to let it slide, moving them on figuring he’d been caught, did NOT get to vote twice (for Obama) so why make a big deal about it.  Could I have reported it...yes...but by the time the police or BOE person got there the man would be long gone, and it would be the registrar’s word against mine as to what happened.

But I do wonder what would have happened if I wasn’t there to watch...to see this happen...one can only surmise.

This one incident alone, that I personally witnessed, is proof positive that voter fraud does indeed happen or at least try to happen, and Barack HUSSEIN Obama and Eric Holder need to stop attacking states for trying to protect the integrity of America's elections.  States like Florida who try their best to keep the integrity of the vote should be heralded NOT be accused of disenfranchising ‘certain communities’ for political reasons because that is simply a crock and they know it.

Thankfully, in the case I witnessed strict voter I.D. laws and in-place electronic check lists caught the man, and in NO way was the left’s touted voter suppression involved as he had already voted.

So guys beware...the usurper will indeed try to usurp again.  We must remain on our guard at all times and above all else work our butts off these final few days to get the vote out...the Republican vote out.  It all boils down to a simple case of numbers that will STOP Barack HUSSEIN Obama from achieving his goal of destroying our beloved America.

And I intend to be one of those that will try my best to make sure he is stopped.
Posted by Diane Sori at 10:50 AM 4 comments: