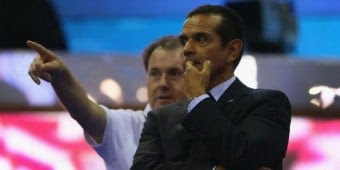 The Democratic Party’s symbolic dismissal of God with the removal and forced return of His name to its platform by party officials amid boos from delegates could be the turning point in the 2012 presidential campaign said talk radio-host Michael Savage.

“This is a big moment,” Savage told his listeners after describing a remarkable divine encounter he experienced last night that has underscored for him the gravity of the moment.

“America is disgusted with this party of atheists and America haters,” he said.

At the Democratic National Convention in Charlotte today, the Associated Press noted Democratic officials were embarrassed by the reaction to the party’s removal from its platform yesterday of God’s name and of a declaration that Jerusalem is Israel’s capital.

When officials tried to reinsert the language today through amendments, Chairman Antonio Villaraigosa, the mayor of Los Angeles, had to call for a voice vote three times  because the outcome was unclear. The motion required an affirmation of two-thirds to pass, but it sounded like the yeas and nays were equal. When he ruled that the amendments had been approved by acclamation, he was met with a chorus of boos from delegates.

The scene at the DNC today was a sharp contrast to Savage’s experience last night at a Jewish wedding held at a cold, foggy and windy Presidio on San Francisco Bay.

The site of the wedding was next to the graves of thousands of war dead.

Savage said that as he stood behind the area where the ceremony took place, he noticed a small, bronze plaque in the ground that read: “In memory of all those who died on D-Day.”

“I looked up and I said to the rabbi, ‘Do you realize that if it wasn’t for these men who died on D-Day, none of us would be here today. We’d all be lampshades. We’d be dead.”

The rabbi then “grabbed my hands and we danced around the memorial stone.”

“It was like something out of Chagall,” Savage said, referring to the Russian-French Jewish artist.

“Ten men dancing around this memorial to the fallen of World War II. The profundity was overwhelming to me,” Savage said.

Savage told his listeners of a dream he had that night that tied the wedding story to the events of today.

“I had a vision that the souls of the dead soldiers were drifting over the wedding canopy as this young Jewish couple was being married – that they were finally released from their graves,” he said.

“Many of them were released from their graves, and they knew what they had died for – so we could have religious freedom.”

That “brings us to today” and the events at the Democratic National Convention, Savage said.

“Can you imagine, a nation founded on the principles of God is being taken over by a party that despises God, denies God’s existence and wants to stab Israel in the back in order to support the Islamists who would kill the Jews and drive them out of the Middle East?” Savage asked.

The vote Nov. 6, he said, is a choice between those who believe in God and support Israel, “despite their many blemishes,” and those who support “the Islamist head cutters.”

Savage said he knew “God’s hand was involved” in the wedding last night and in his own presence there, after initially deciding he didn’t want to go.

He told of meeting Jews from the former Soviet Union “who lived through the denial of God” and “through what Obama is trying to bring to America.”

Savage said the Jews who lived under communism told him that in the worst of times they never hated God or cursed him.

“One of them said to me, ‘You have one of the most unique roles on the planet.”

Savage said he didn’t know the man, a mystic-oriented rabbi.

“He looked me right in the eyes, and he held my hand and said, ‘You, Michael Savage, have one of the most unique and important roles in America today.”

The rabbi told him “the world is in balance, and your job is very important.”

Savage replied: “Well, what is my job?”

“Your job is to be the bridge between God and man,” the rabbi said.

“I can’t believe that,” Savage said.

“Well, you’d better believe it, because that’s what you’ve been doing on the radio,” the rabbi said. “Do you think it happened for nothing?
Posted by Diane Sori at 6:34 PM No comments:

Give them enoough rope and the Dems hang themselves 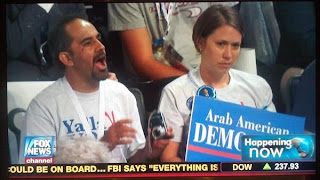 Here's the FULL uncropped photo that the msm is NOT posting or showing about the guy on left shouting 'NO' about Jerusalem and God.  Now look at sign on right.

Are you shocked...I'm NOT as Barack HUSSEIN Obama has willingly let 'them' into our government.

And yes, these two are together.

Below is the link to the video that shows how in just three short minutes, Democrats handed the 2012 election to Republican Mitt Romney...yeeessssss!!!!!!!!!!!

And this is a statement from Congressman Allen West (R-FL) concerning these two events:

"Yesterday, caught in their attempt to quietly throw the Jewish State of Israel under the bus in their party platform, Patrick Murphy's Democrats dragged their party faithful kicking, screaming and booing to a vote to re-instate pro-Jerusalem language and references to God.

It was a cynical, political move to hastily pull a veil over their true beliefs. President Obama has attacked religion with policies forcing religious organizations to provide contraceptive services contrary to their religious beliefs.

His policies endanger Israel and his disdainful attitude toward Prime Minister Benjamin Netanyahu, and by extension, the Jewish people of both Israel and the United States, is reprehensible.

Booing God and Israel? Are these the values of President Obama, Nancy Pelosi, Debbie Wasserman-Schultz and their lapdog, Patrick Murphy?"

Posted by Diane Sori at 3:56 PM No comments:

Night two...a freak show like no other
By: Diane Sori 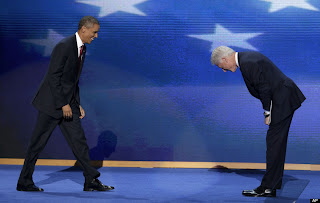