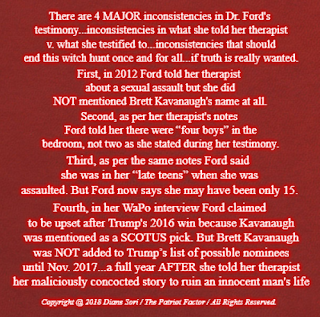 Posted by Diane Sori at 7:53 PM No comments:

Email ThisBlogThis!Share to TwitterShare to FacebookShare to Pinterest
BREAKING NEWS...
A short while ago Neil Cavuto reported that Jeff Flake issued a statement that he only did what he did regarding the F.B.I. investigation to HELP Brett Kavanaugh and that he intends to vote FOR him when it comes to the Senate vote. Problem is we can no longer believe a word this man says...guess we'll just have to wait and see and seethe in the mean time.

Email ThisBlogThis!Share to TwitterShare to FacebookShare to Pinterest
RIGHT SIDE PATRIOTS...for those who missed last night's show (or just want to listen in again) where Craig and Diane discussed in detail the Democrat's witch hunt against Supreme Court nominee Brett Kavanaugh and Thursday's testimony by the two person's involved...you can listen to it (and previous shows) anytime at your convenience on our PodBean hosting/archive site.

Today was supposed to be simple. The Senate Judiciary Committee was set to vote on advancing the Supreme Court nomination of Brett Kavanaugh to the Senate floor. Then, 60 hours of debate, followed by a final vote on Tuesday. It was going to be a party-line vote. It was going to be dotted with Democrats once again whining about the process. They also want an FBI investigation into the sexual misconduct allegations lobbed against Kavanaugh. One of the women, Christine Blasey Ford, testified before Congress yesterday. Judge Kavanaugh addressed the committee later that afternoon. In a fiery speech, he defended his name, reputation, and career, which has been tarnished by what appears to be a coordinated political hit job. He stringently denies the allegations; Ford alleges Kavanaugh tried to rape her at a high school party. None of the three allegations hurled against him have any evidence or witnesses. It's devolved into a circus. On top of that, Sen. Jeff Flake (R-AZ) decided to stab his party in the back.

Email ThisBlogThis!Share to TwitterShare to FacebookShare to Pinterest
Federal judge sides with CAIR against parents, students, in favor of “Islamophobia” initiative in San Diego schools

Once again, the “Islamophobia” canard is being wielded by CAIR as a means to attain special status to Muslims. This is being done in public school systems, but is as yet unrecognized by authorities for what it is. A federal judge has sided with the Council on American-Islamic Relations and against students and parents in […]

Prime Minister Benjamin Netanyahu warned the United Nations this week that Israel has uncovered what they believe is a “secret atomic warehouse” in Iran.

That’s interesting — because remember when Barack Obama told the world that yes, the nuclear deal he was pressing with Iran would indeed be honored because the new Tehran was his personal bestie?

And now Israel has offered up even more proof.

From United With Israel

Read entire article and see video here: https://gellerreport.com/2018/09/netanyahu-iran-secret-atomic.html/
Posted by Diane Sori at 7:47 AM No comments: