By Dave Boyer / The Washington Times

The U.S. and five other world powers reached an agreement with Iranian leaders early Sunday in Geneva to curb Iran’s nuclear program in exchange for a gradual easing of economic sanctions.


The announcement followed an intensive diplomatic push by Secretary of State John F. Kerry and five foreign ministers to close the deal curbing Iran’s suspected nuclear-weapons program. But as the parties moved toward an agreement in recent days, Israeli Prime Minister Benjamin Netanyahu expressed deep skepticism that Iran would abandon its nuclear ambitions.

Late Saturday night at the White House, President Obama said the tentative pact will “cut off Iran’s most likely path.

“While today’s announcement is just a first step, it achieves a great deal,” Mr. Obama said. “For the first time in nearly a decade, we have halted the progress of the Iranian nuclear program, and key parts of the program will be rolled back.  Iran has committed to halting certain levels of enrichment, and neutralizing part of its stockpile. Iran cannot use its next-generation centrifuges—which are used for enriching uranium.”

Mr. Obama said the U.S. and its partners will not proceed with new sanctions that would scuttle the deal.

“Ultimately only diplomacy can bring about a durable solution,” the president said. “Now is not the time to move forward on new sanctions – doing so would derail this promising first step, alienate us from our allies, and risk unraveling the coalition that enabled our sanctions to be enforced in the first place.”

The agreement is aimed at freezing Iran's nuclear program for six months while offering the Iranians $7 billion in relief from crippling economic sanctions. If the six-month interim deal holds, the parties would negotiate final-stage agreements to ensure Iran does not build nuclear weapons.

In return for Iran agreeing to increased international inspections of its facilities, the U.S. and its partners will suspend sanctions on gold and precious metals, Iran’s auto sector, and Iran’s petrochemical exports, potentially providing Iran about $1.5 billion in revenue.

The Associated Press reported that the tentative deal does not recognize Iran’s oft-asserted right to produce enriched uranium, a necessary ingredient for nuclear weapons. Iran cannot increase its crude oil sales in the next six months, the White House said.

The deal between the Islamic state and the U.S., France, Germany, Britain, China and Russia was nailed down after more than four days of negotiations.

The agreement “deserves the full support of the international community and the U.S. Congress,” he said.

The Iranians, mindful of opposition to any restrictions among hard-liners back home, had been insisting on retaining the right to produce nuclear fuel by enriching uranium, saying they need it to produce electricity and for scientific research.

Leaders in the U.S. Senate had put a clock on the talks by announcing plans to enact further sanctions against Iran as soon as next month. The White House on Friday had asked lawmakers to continue giving U.S. and international negotiators the “space” they need to bring a deal to the finish line.

Diplomacy was stepped up after the landslide election of Hassan Rouhani, a relative moderate, as Iranian president in June, replacing bellicose nationalist Mahmoud Ahmadinejad.

The Western powers’ goal had been to cap Iran’s nuclear energy program, which has a history of evading U.N. inspections and investigations, to remove any risk of Tehran covertly refining uranium to a level suitable for bombs.


Tehran denies it would ever “weaponise” enrichment.

- This article is based in part on wire-service reports.

Email ThisBlogThis!Share to TwitterShare to FacebookShare to Pinterest
Have You Seen the New Time Magazine Cover?

Now that the Big Lie has been exposed for everyone to see, it’s going to take some time for it to sufficiently sink in. I imagine most low-information voters who don’t follow politics regularly -- the obvious exception being people who’ve already been negatively impacted by the Affordable Care Act -- aren’t too familiar with the president’s now-broken “if you like your health care plan, you can keep your health care plan” pledge. That will all change soon enough.

Now, of course, when Americans head to the grocery store -- or perhaps to their local pharmacy -- this cover will be staring them blankly in the face as they wait in the check-out line. Oof: 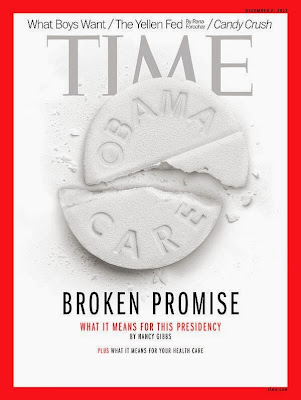 Nearly Retired? Facing a Huge Increase in Healthcare Costs? More on "Opting Out" of Obamacare

In response to Gambling On No Healthcare Insurance: Is it a Good Deal? Here's the Math; Obamashock! Work More, Get Less! "Money Multiplier Man" replied...


If you get a heart attack, you cannot wait until open enrollment. You need treatment now. And the hospital will send you a bill for $92,000. So if you are without insurance, you're in big trouble.

That is precisely the risk (actually one of them). Yet, how likely is that scenario for someone under 30 and in good health? For those in good health, an auto accident may be more likely.Still - accidents happen.

But for someone with little money or assets, why not take the chance? Bankruptcy is always an option.

Ultimately, this line of thinking may cause millions to opt out. And it is not just the young who will opt out.

Her solution, yet one she really would prefer not to be forced to make, was to "opt out" and pay the penalty.

Your articles are always a well-written source of insight, wisdom and common sense for me. Thank you for providing excellent current event commentaries!

I am a 61 year old self-employed woman who received notice from Anthem Blue Cross on November 4th that my individual health insurance plan was being cancelled because of the "Affordable" Care Act. My health plan currently costs $225 per month and I am happy with it. The notice goes on to say that unless I elect something else by December 15, 2013 I will be automatically enrolled in a new ACA-compliant health plan at a cost of $530 per month, a 136% percent increase in premium. My annual health plan cost will increase from $2,700 to $6,360 for 2014.

The bottom line for me is a choice between reducing the amount of my retirement plan contributions by $3,660 per year or going without health insurance and paying the penalty. As a self-employed person who couldn't afford to start saving for retirement until my mid-forties, I'm equally afraid of either choice.

In trying to understand what caused health insurance plans to skyrocket in cost, I found out that to be ACA-compliant they must now cover things like maternity care and pediatric dental -- even if you're a 61 year old empty nester!

After researching my state's exchange web site it appears that I'm ineligible for any premium subsidies or cost-sharing assistance. My husband's income (he's on Medicare) must also be counted and our combined income is over the $62,040 threshold. And after speaking with my long-time insurance agent, there aren't any other health insurance options available to me next year for much less than $530 per month.

So, what to do? I'm healthy now and I'll be eligible for Medicare in less than four years, can I make it that long without a serious ailment? I'm inclined to go without health insurance, even knowing it's a huge financial risk. But so is not having enough retirement savings.

Update: this week I received another notice from Anthem Blue Cross. They're allowing me to opt into continuing my current health coverage through February 28, 2014. Of course I've already signed up for this, but it only postpones my gut-wrenching decision by two months.

The Obamacare mess reminds me of the 2008 presidential platform slogan "Hope and Change" -- his changes have me hoping that US citizens can regain freedom from a meddling, control-freak government.

Thanks again for your insightful writings,

Reader Lynne provides yet another reason to "opt out" and pay the penalty. Ultimately, how many will opt out?

We will find out within a couple of months.


TEHRAN (Tasnim) – A top IRGC commander stressed that Iran is capable of safeguarding its interests against its adversaries, noting that fight against a hierarchical global system developed and propped up by the US is a major quest for the Islamic Revolution.

He also pointed to Iran’s high defensive capabilities in military and cultural spheres, and added, “Today, our country is capable of defending its national and religious values and interests against any enemy with any capacity.”

Warning against the diverse tactics employed by the country’s adversaries, Brigadier General Salami said, “The enemy’s battle has not finished today, but its content and form has changed.”

“At present, the enemy’s war has shifted away from the military sphere to the political, cultural and internal security fields, and to rivalry in the sphere of international and economic influence,” the commander explained.

In relevant remarks on October 13, IRGC Commander Major General Mohammad Ali Jafari said Iran has been able to hold a strong position in the world despite the hostile measures taken by enemies of the country, Israel in particular.

In spite of the enmity of those who are opposed to Islam, especially the hostile moves by the Zionist regime of Israel, the Islamic Republic of Iran has made a great deal of headway, Major General Jafari said at the time.

Posted by Diane Sori at 9:48 AM No comments:

An often overlooked provision of the Affordable Care Act allows Americans to scam the system by taking advantage of a grace period for paying insurance premiums.

Under Section 156.270 of the 11,000-page act, people need to pay a premium for just one month and then can qualify for a three-month grace period during which they don't pay premiums — but continue to get covered medical care.

The insurance company must pay claims during the first month of the grace period, but during the second and third months doctors and hospitals will be left to collect unpaid bills, Watchdog.org reports.

And any doctor who is paid by the insurance company during the last two months of the grace period will have to return that money if the insured don't pay their premiums, according to the website.

"In a sense, it legalizes fraud," declared Wesley J. Smith, a senior fellow at the Discovery Institute of Human Exceptionalism. "It legalizes putting your burdens on the insurance companies' shoulders and never paying your premiums."

The only downside for the scammers is that they have to wait until the following year's open enrollment if they want coverage on the insurance exchange.

The loophole is already being exploited in Massachusetts, where a healthcare system similar to Obamacare was enacted in 2006 and signed into law by then-Gov. Mitt Romney.

"People [in Massachusetts] are signing up and getting care and bailing out," said Devon Harris, senior fellow with the National Center for Policy Analysis.

"I was talking to an insurance agent a few years ago. She said once a week she would get a call from a college girl who discovers she's pregnant and wants health insurance. That's an example of a condition you can schedule."