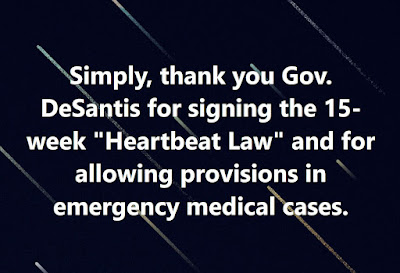 Posted by Diane Sori at 4:20 PM No comments:

Florida Gov. Ron DeSantis is warning migrants not to come to his state after a bus full of migrants from Texas who were dropped off at the U.S. Capitol said they plan to head to Miami.

A bus full of 23 migrants from Texas unloaded at the foot of the U.S. Capitol Wednesday morning, as part of Texas Gov. Greg Abbott's new plan to counter federal immigration policies during an ongoing border crisis.

The migrants told Fox News that they are planning to head down to Miami, Florida, likely by train. The bus ride conducted by the Texas Department of Emergency Management (TDEM) concluded in D.C. and is not continuing on to Florida, so migrants would have to find their own way down to the southern state.

Rep. Adam Kinzinger (R-IL) is leaving Congress. He’s a vocal Donald Trump critic. He will fight Trumpism whenever he can, it would seem. And he will do that by totally running away from Washington next year. It cuts both ways. Moderates in the Democratic Party are doing the same. They rail against the partisanship gripping Congress so what do they do? They leave. No spine whatsoever. Evan Bayh, Olympia Snowe, and now Adam Kinzinger—the heat was just too much so they left the kitchen. Rep. Liz Cheney (R (D?)-WY) may be on her way out in a primary. She has to hope that Democrats in her state can bail her out as the GOP base is through with her. The last vestiges of the anti-Trump wing in the House could be swept away by January 2023. Yet, Kinzinger could probably just leave…now.

After this tweet about nuclear weapons, he’s certainly acting like he’s leaving. With no re-election campaign, the man is just doling out braindead tweets about nukes. Read more and se tweets here.