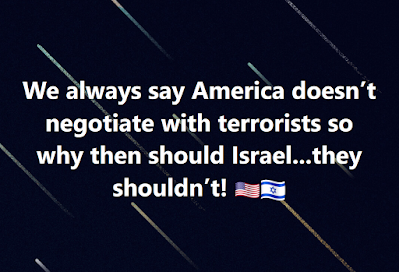 ...So while Hamas plays "protector" of Jerusalem, and while Jerusalem’s Old City remains under Israeli control, the Al-Asqa mosque itself is, since 1967, under the administration of the Jordanian and Palestinian-led Islamic Waqf. But the fact is it's the Jews who hold rightful claim to all of Jerusalem including the Al-Asqa mosque site as they not only reunified the city after the said Yom Kippur War, but were here first...many millennia before islam and its faux-god allah was invented by a man pretending to be a prophet.
But to Hamas and their fellow terrorist ilk the facts don't seem to matter for it's the Jewish people who remain their prime target with Israel herself the bullseye. And knowing this has lead Defense Minister Benny Gantz to order a "massive reinforcement" of security forces to suppress the ongoing...Read entire article and see video here: https://thepatriotfactor.blogspot.com/2021/05/op-ed-red-line-crossed-consequences-to.html
Posted by Diane Sori at 10:50 AM No comments:

From New York and California to Illinois and Utah, the recent conflict between Israel and Gaza has generated a disturbing backlash against American Jews – who have found themselves the targets of death threats, hate speech and violent physical attacks.

"Stop telling me this is about Israel and Gaza," said a New Yorker who was confronted by a pro-Palestinian mob on his way to synagogue this week. "My people are being targeted across the United States in broad daylight. This is textbook anti-Semitism, and we will continue to live in danger until the public starts to recognize it for what it is."

His remarks were a common refrain rippling across U.S. Jewish communities in recent days. Here's a look at some recent incidents throughout the country.

President Biden appeared to take credit for the ceasefire between Israel and Hamas on Thursday during remarks about the conflict.

“Over the last 11 days, I spoke with the prime minister six times. I've also spoken with President Abbas and the Palestinian Authority more the once and part of our intense diplomatic engagement," Biden said Thursday.

He then thanked his secretaries of State and Defense, his national security adviser, and everyone in his administration “for their incredible efforts to bring this … outcome that we’re about to see.”

The president continued: "You know, we've held intensive, high-level discussions, hour by hour, literally, Egypt, the Palestinian Authority and other Middle Eastern countries, with an aim of avoiding this sort of prolonged conflict we've seen in previous years when the hostilities have broken out."

Today, Friday, May 21st, from 7 to 9pm EST, RIGHT SIDE PATRIOTS Craig Andresen and Diane Sori discuss 'A Red Line Crossed, Consequences To Pay'; 'The Great Reparation Revelation'; and important news of the day.