The Most Powerful Speech Ever Given Before the U.N. 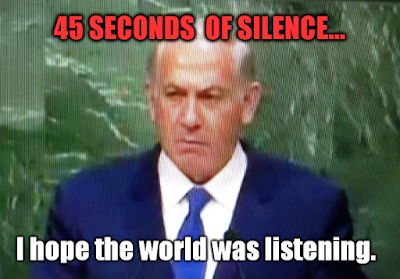 Posted by Diane Sori at 5:46 PM No comments:

Last Friday night I was at my favorite cigar bar watching the news of the Umpqua Community College massacre. Like you, my buddies and I were pissed off, sad and sick to our stomachs. Three things, in particular, were ticking us off regarding this senseless slaughter.

1. Another “Gun Free Zone” Epic Fail.
2. Christians Were Targeted.
3. Apparently Only One Dude Out Of A Couple Of Dozen Fought Back.

Here's my thoughts regarding the foul aforementioned.

I know this will be too difficult for your typical abecedarian leftist to grasp but ... If there had been a good guy with a gun on campus, who was trained, licensed and allowed to carry, he could have sent that murderous spawn of Satan to an early hell where he could slow roast for all eternity. Boom. Problem solved.

Unfortunately, there was no concealed weapon in the possession of a concerned citizen to stop this demonic dipstick because guns are disallowed on that campus. How cute. How PC of UCC. I bet Obama really loves you.
Read more »
Posted by Diane Sori at 12:12 PM 1 comment:

That’s the Telegraph subhead on this piece: “Rebels warn that Russian air strikes risk pushing moderates into arms of more powerful extremist groups.” How many times over the years have we heard this — that too strong action against Islamic jihadists would drive “moderates” into the arms of “extremists”?

And suddenly there are “moderates” among […]

You know what “extremism” means for Obama: patriots. You can get all the background on Obama’s disregard for American sovereignty in my book The Post-American Presidency: The Obama Administration’s War On America. Read my expose at Breitbart:

On Wednesday, Attorney General Loretta Lynch announced at the United Nations that her office would be working in several American cities to form what she called the Strong Cities Network (SCN), a law enforcement initiative that would encompass the globe.

This amounts to nothing less than the overriding of American laws, up to...

Jeb Bush has dropped into sixth place as real estate and TV billionaire Donald Trump is maintaining his lead in the Republican presidential campaign field, a new poll shows. 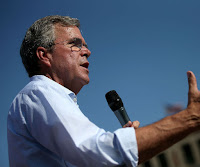 Special:
The survey also finds:
"Overall, 66 percent of GOP potential primary voters say immigration is a very important issue in their decision about who to vote for in 2016," Pew writes.
"However, 84 percent of those who say they would be more likely to support a candidate who wants to deport all undocumented immigrants say the issue is central to their presidential vote."

The poll has a margin of error of plus or minus 5.5 percent.

This New Lawsuit Against Obamacare Has Legs

Hans von Spakovsky is an authority on a wide range of issues—including civil rights, civil justice, the First Amendment, immigration, the rule of law and government reform—as a senior legal fellow in The Heritage Foundation’s Edwin Meese III Center for Legal and Judicial Studies and manager of the think tank’s Election Law Reform Initiative. Read his research.

For those who thought that the lawsuits challenging the Patient Protection and Affordable Care Act (Obamacare) were at an end, think again. On September 9, Judge Rosemary Collyer of the federal district court for the District of Columbia refused to dismiss a lawsuit filed by the entire U.S. House of Representatives against the Obama administration over its funding of certain aspects of Obamacare.

This is a historic lawsuit and a historic decision. In the past, individual members of Congress have filed a number of (unsuccessful) lawsuits against sitting administrations. But this is one of the few occasions when such a suit has been pursued by the entire House of Representatives as an institution.

Adopted on July 30, 2014, House Resolution 676 authorized the speaker to file suit. On January 6, 2015, the House in the new 114th Congress adopted HR 5, authorizing itself to succeed the 113thHouse as a plaintiff in the lawsuit.