...But again, the problem with this is that said little dictatorial kingdoms are going out over the very public internet highway, and here is where a legal line might indeed have been crossed. And this is something that, I believe, must be looked into by those who know the intricacies of communication law, for I'm not sure if a private company like Facebook has the law on its side in regards to working with the Biden administration to help censor opposing viewpoints on what is and will remain a public internet venue.

But always remember that it's not up to the government to decide what is or is not truth nor should social media platforms be determining right or wrong speech. And it's especially grievous when these two entities join together...as has now been admitted to...and use the public internet highway to basically make a mockery of “We the People's” First Amendment right to free speech...

Read entire article here: https://thepatriotfactor.blogspot.com/2021/07/op-ed-mockery-x-two-by-diane-sori.html
Posted by Diane Sori at 9:30 AM No comments:

Chicago Mayor Lori Lightfoot (D) continues to defend her racist policy with reporters. Speaking to “Sway” host Kara Swisher in an interview published in The New York Times on Monday, Lightfoot explained her outrageous decision to only accept interviews from non-White journalists.

“I would absolutely do it again,” Lightfoot told Swisher, who is, ironically, a White journalist. “I’m unapologetic about it because it spurred a very important conversation, a conversation that needed to happen, that should have happened a long time ago.”

“I’m a Black woman mayor. I’m the mayor of the third-largest city in the country. Obviously I have a platform, and it’s important to me to advocate on things that I believe are important…The media is in a time of incredible upheaval and disruption, but our city hall press corps looks like it’s 1950 or 1970.”

Email ThisBlogThis!Share to TwitterShare to FacebookShare to Pinterest
Korean War Ends
By: Diane Sori / The Patriot Factor
Today, June 27th, 1953 the Korean war ended NOT with a victory per se, but with an armistice between the United States, Communist China, and North and South Korea. And while the armistice still holds today, with Kim Jung-un as the North's leader it's an armistice that's tenuous at best. May we always  remember and honor those brave Americans who served and especially those who did not return home for they gave their lives so others could be free. 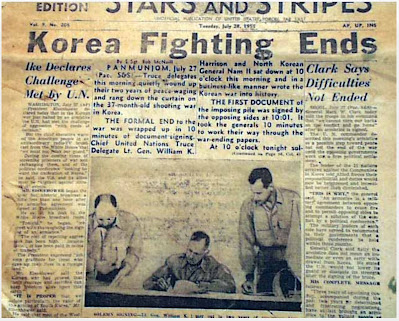 Today, Tuesday, July 27th, from 7 to 8:30pm EST, RIGHT SIDE PATRIOTS Craig Andresen and Diane Sori discuss 'A Mockery x Two'; 'Purveyors of Lies Are NOT Guardians of Truth'; and important news of the day.

Posted by Diane Sori at 6:07 AM No comments: