Tomorrow is Election Day...vote as if your country's very future was at stake because it is! 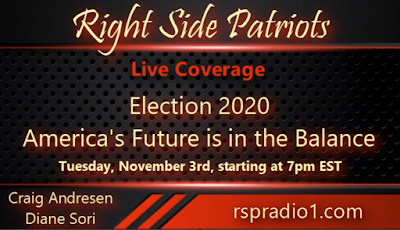 If New Batch of Polls are Correct, Trump Will Soar Past 300 Electoral Votes

Former House Speaker Newt Gingrich said that the Left is going to be “terribly shocked.” The latest slate of polling from the liberal media fake press has Biden ahead by double-digits, though his campaign is acting anything like they’re ahead. Obama and Biden scrambled to Michigan this weekend. Why? If you’re ahead by 10+ points nationally, Biden doesn’t need to do this. Alas, even his campaign says the polls are inflated, which could also be a way to keep the Democratic base from becoming complacent. Either way, polling this cycle has been outright atrocious, with suburban GOP voters, college-educated voters, and Democrats being oversampled to the nth degree. Trump Democrats and rural voters have been ignored. Even Michael Moore knows the Trump vote is undercounted; he set off the alarm bells this week as well.

From Minnesota to New Hampshire, Biden is down. PollWatch, Larry Schweikart, and David Chapman have been some of the people who have been tracking the early vote totals and the overall state of polling, in general, this cycle, cutting through the liberal nonsense.

Donald Trump has been President for almost four years now. He’s a loud-mouth and a straight-talker. He has a very different style than Barack Obama. He questions politics as usual and thinks out of the box. That’s all Never-Trump journos and politicians need to attack and demonize him, to undermine all his great successes, to portray him as unliked and unpopular, and to blame him for all the ills of the world.

If we take a neutral, objective view of Trump’s first term, however, without all the Trump derangement, we are left with an astonishing success list. So, without further ado, here are Trump’s Top Ten!

Posted by Diane Sori at 7:29 AM No comments: