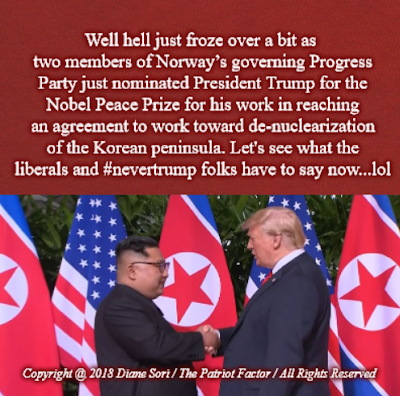 Posted by Diane Sori at 1:10 PM No comments:

Email ThisBlogThis!Share to TwitterShare to FacebookShare to Pinterest
Labels: denuclearization, Nobel Peace Prize, North Korea, President Trump
RIGHT SIDE PATRIOTS...for those who missed last night's show (or just want to listen in again) where Craig and Diane discussed 'Two Acts of Treason: Obama Style'; 'The Clinical Term for Liberalism'; and the NOKO Summit...you can listen to it at your convenience on SoundCloud at: https://soundcloud.com/right-side-patriots-260798913/rsp-arch-6-12-18

Republican moderates in the U.S. House late Tuesday were reportedly two signatures shy of forcing a vote on a proposal addressing DACA (Deferred Action for Childhood Arrivals), the Obama-era program for delaying deportations of those who entered the U.S. illegally as children.


Many believe the bill would have passed if it had reached the House floor. The moderate wing was promised a chance to vote next week on other immigration bills.

Moderates needed 218 votes on a “discharge petition” that would have forced a vote on the DACA proposal, but secured 216.

The parliamentary gambit – a rarely used tactic to circumvent committee approval and the speaker to bring a bill to the House floor – would’ve forced members to debate a series of immigration bills, including a more bipartisan one that has the backing of all Democrats and some Republicans, according to Reuters.

What could possibly go wrong, you greasy Islamophobe? Diversity is our strength! “France: 50 Islamic terrorists and 450 radicalised prisoners will be released by 2019,” by Abdelhamid Kaddour, Voice of Europe, June 7, 2018: “Four-hundred-fifty radicalised prisoners will be out of jail by 2019 plus fifty Islamic terrorists,” said the French Justice Minister, Nicole Belloubet, […]
Read in browser »

Republican Senator James Lankford is 100 percent correct. One of the world’s most brutal rulers should not be in possession of the world’s most advanced fighter jet. Turkish President Recep Tayyip Erdogan has used his already formidable military to ruthlessly butcher Kurdish villagers in his native Turkey. He has used his air force to harass and bully neighboring Greece and Cyprus. In March, 2018, Erdogan called for an “army of Islam” to attack Israel. Erdogan also provides military support to Hamas.

In addition, Erdogan has indicated that he will purchase the Russian S-400 air defense system. This is a total violation of NATO policy. What is the point of NATO if its members can collaborate with the Russian military? Recently, American pastor Andrew Bunson was jailed in Turkey on charges of colluding with terrorist groups. Oh really? If convicted (which is likely), this poor pastor will be sent to a Turkish hellhole for a long time. Call your Senators and demand that they support Senator Lankford’s effort to stop the butcher Erdogan from receiving the F-35 fighter jets.

Reead entire article here: https://gellerreport.com/2018/06/republican-senators-trying.html/
Posted by Diane Sori at 6:47 AM No comments: