Our own Julio Rosas has been at the border since Joe Biden decided to reverse course on Donald Trump’s immigration enforcement agenda. Needless to say, things are about to change for the worse down there. Mr. Biden has been on an executive order kick. Should we call him King Joseph of Delaware? I don’t know, but Rosas noted that there is a looming immigration crisis that’s about to hit this administration as hordes of illegal aliens continue to march toward our southern border. He’s setting the ground for the floodgates to open for illegal aliens, but also drafting new COVID restrictions for American citizens. It’s backward.

As Biden has made tackling COVID his main issue supposedly, he’s bound to cause a spike in cases along these border areas that do not have the resources to provide adequate care to anyone. This seems like a situation that can be avoided by merely enforcing our immigration laws and agreements, especially the Migrant Protection Protocols. This is known as the “Remain in Mexico” program, which prevents migrants from entering the country until their asylum declarations are assessed. 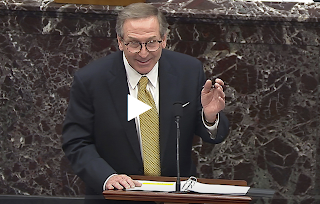 Michael Van Der Veen, attorney for former President Trump, shows video of Democratic politicians using fighting language in the past to make a point that Trump's words before the Jan. 6 Capitol riot were no different.

In the course of one extraordinary hour, the defense team for former President Donald Trump thoroughly demolished the impeachment case against him that House Managers spent two days alleging.

It was a resounding and humiliating defeat. The defense could have rested its case after the first 60 minutes. It was over. They won hands down. In the end, Trump’s lawyers used less than three hours of their allotted 16 before resting.

The brilliance of the defense was the use of videotape to exonerate Trump. They beat prosecutors at their own game. The clips showed the shameful hypocrisy of both the managers and Democrats who have absurdly accused Trump of inciting an insurrection by using the terms "fight" and "fight like hell" when he spoke to a crowd of supporters on Jan. 6, 2021.

RIGHT SIDE PATRIOTS...Podcast
For those who missed last night's show where RIGHT SIDE PATRIOTS Craig Andresen and Diane Sori discussed 'Unity vs. Identity Politics'; 'Obama’s Third Reich and Other Things I Believe'; and the latest on the Trump impeachment trial....you can listen to it (and previous shows) at your convenience at: https://www.rspradio1.com to go directly to our podcasts and hope you become 'followers' of RIGHT SIDE PATRIOTS.
Posted by Diane Sori at 6:58 AM No comments: