The Real Cost of Obama: $19 Trillion

There's a super storm raging over our economy that's been seeded and fueled by the federal government over a period of the past several decades. And it's literally costing the country trillions of dollars in GDP per year.

It’s not merely garden-variety government waste that's the problem either. It's monumental stupidity by the government, combined with venial cupidity by voters who think they can get others to pay for their free lunch.

This government-created storm has, more than any other factor, contributed to the fiscal crisis; a crisis that is creating more expansive government programs, robbing us of more GDP, thus ensuring the political class will take more actions that punish the most productive and dynamic elements of our society.

You know? The people who create economic growth?

In order to understand how this storm is being fed, you need only consult some official government figures.

The labor participation rates released recently by the Bureau of Labor Statistics now stands at 63.6, near Carter-recession levels.

According to policy scholar and historian, Professor Richard Vedder of Ohio University, that means as many as 14 million of people are officially out of the labor pool. And the professor from Ohio says it's the government's own unemployment program that's helping to reduce the number of bodies willing to work.

“If you give people money to not work,” says Vedder, “some people will say ‘Gee that’s a pretty good option.’… There have been a lot of studies over the years going back to the 1970s that show these programs on balance added a bit to the unemployment rate.”

Because unemployment compensation has lasted so long, however, unemployment rates have gone up “a couple of percentage points” from where it would otherwise be.

Vedder's back-of-the-envelope calculations that he shared with me says that those missing workers could be costing the economy as much as $800 billion in GDP per year.   “That’s $2500 for every person, or $10,000 for every family” in GDP he says.

But that's not all: Multiplied and compounded over 10 years, that's not $8 trillion missing from the economy, but rather $9 trillion.

If you want to know why we have an entitlement crisis, why some cities, like Detroit, can't afford to pay for basic services or why teacher pension plans have to cut back benefits, it's not because tax rates are too low, or spending has been cut to the bone. It's because politicians have made off with $9 trillion from our GDP.  That's not just missing GDP, you see; it's missing payroll taxes, income taxes, sales taxes and teacher pension contributions.

While our political and cultural elite like to pretend that there is a settled science that supports the notion that government creates "revenue” by Acts of Congress and the generosity of the Executive Office, once again they have it exactly backwards: All public revenues first start out as private money in the economy. When that money is missing from the private sector, it can never afterward make its way to the public sector.

Now here's the bad news: Labor participation rates, and the effect they have on GDP, are just long spring showers that someday will end compared to the storm created by the regulatory burden in the country.

According to a report in 2011 by the Heritage Foundation, the government's own Small Business Administration estimates that compliance with various federal regulatory structures cost the economy another $1.75 trillion every year. And that's before we even account for the costs of Obamacare and Dodd-Frank financial "reform" - both of which appear to have higher price tags than originally touted.

While we will never have a regulation-free government- nor should we- it bears asking how long we can afford to pay 13 percent of our GDP to comply with federal mandates, over and above taxes that we pay to support basic services like the common defense.

Because doing my own back-of-the-envelope calculation says that by cutting regulatory costs to half of what they are currently means we can add another $9.8 trillion in GDP as well. If we combine that growth with policies that encourage employment, we can add $19 trillion to GDP over ten years.

$19 trillion could go very far toward righting our fiscal ship even as the fiscal storm continues.

Because the fiscal storm that we see happening in western, industrialized counties isn't just fiscal, it's also demographic. With aging populations and near zero internal birth rates, we can no longer rely, as we once did, on a riding tide of population to lift all boats in our economy.

We need to get back the private GDP that politicians today are so happily squandering through myriad government schemes like Sarbanes-Oxley or emergency unemployment benefits. Since it’s unrealistic to expect politicians to make meaningful cuts in government spending, we have to reduce the burden of government- over 40 percent of our GDP in 2013- by growing the private sector more rapidly.

Or we risk being swamped in the face of this man-caused, government sponsored super storm.

Posted by Diane Sori at 5:09 PM No comments:

The FB police are at it again... 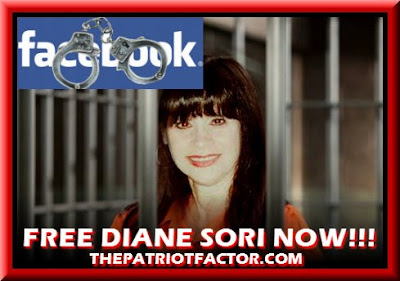 Posted by Diane Sori at 4:17 PM No comments:

Oh woe is me as I'm in a FB timeout again for something I did NOT do...had NO part in...and NO knowledge of. FB thy name is 'selective enforcement.'

Selective enforcement...the ability that executors of the law (in this case the FB police) have to arbitrarily select choice individuals as being outside of the law...in my case Facebook's Community Standards. The only problem here is I violated NOTHING as first, I was NOT online when the post in question was put up, and second, when the post was making the rounds I was NOT only NOT online I was 50+ miles away from my computer sitting in a dentist's chair (ugh).

This Feature is Temporarily Blocked...
You recently posted something that violates Facebook policies, so you're temporarily blocked from using this feature.  Learn More.

To keep from getting blocked again, please make sure you've read and understand Facebook's Community Standards.
This block will be active for 30 days.

This Feature is Temporarily Blocked...how I hate those words but that was the message I received from FB as soon as I logged on later in the day along with what the post was that I 'supposedly' put up.  What's amazing was how I could post when my carrier (Comcast) was down for the entire previous evening, including at the time I was supposed to have posted the oh so terrible post...which by the way was a post showing muslim brutality against Christians.

But the point is I did NOT post it...in fact the person who did (a fellow adman on a site I administer on) admitted to posting it and made NO apologies for it...nor should he have had to because muslim brutality against Christians is a daily occurrence in the cesspool that is the Middle East and North Africa.  You'd think FB would then lift my blocking and the others they blocked after the person who posted it came clean but here's where it gets interesting...they released the admitted poster and everyone else they blocked except for yours truly and one other adman.

Why NOT also release us from this unjust blocking...the only thing I can come up with is that it has to be because both this other person and I are vocal critics of the corrupt Obama administration, and of Obama's sanctioned islamization of our government and our beloved country.

And when you've been blocked guess what...there's NO way to actually reach FB and talk to a human one on one to appeal your blocking.  Sure FB has a Help Center but it's basically just for overcoming posting problems, friends problems, and downloading pics and such problems...how to appeal a blocking is NOWHERE to be found.

So what is one to do...you call a FB number that you're given by a previous FB time-outer and give that a try but guess what...yes you do get connected to FB but, and here's the kicker...a recorded message comes on that says FB does NOT take personal calls or personal issues at this time.  So NO way to appeal a blocking online or by phone.

That left contacting FB via e-mail on a link that a friend gave me...but I can only send off a few lines as the space allotted is small beyond belief. Anyway, this is what I finally sent them after they did NOT answer my X-number of e-mails as they promised they would...after all, they really do NOT want to be contacted as they think of themselves as untouchable.

“l have NOT yet received a response to the message I sent you about my being blocked for 30 days for something I did NOT do. This is the link to explain it all and it has gone viral over the internet."
http://www.examiner.com/article/facebook-bans-conservative-blogger-for-link-she-did-not-post

"Being that I had NOTHING...I REPEAT NOTHING TO DO WITH THE QUESTIONABLE POST...I DEMAND in the strongest terms possible that you remove my blocking NOW as I will continue to pursue this until you respond. Your actions (falsely punishing me for something I did NOT do) are hurting my reputation and could be actionable in court.”

And so I wait to get out of the infamous FB jail (27 more days to go) relying on friends to post for me...to help me get the truth out about the lies told by this president along with my conservative message.  But one good thing is that when something like this happens you do find out who your true friends are...those that help you out when asked...and those phony friends who hang onto you just for the ride or for the notoriety.

So the unfairness by FB continues along with their double standards, censorship against conservative bloggers and posters, love fest with Obama and anything leftist, and now add selective enforcement into the mix...and selective enforcement crosses legal boundaries as their selective blocking of me for something I did NOT do has harmed my reputation by saying I am a FB 'lawbreaker' when I am NOTHING of the sort.

I'm in this battle for as long as it takes as FB will NOT take me down for I did NOT do what I was accused of, and I do truly believe that in the end the truth will prevail and I will be set free from the infamous FB jail...which by the way no file will help me get out of...must keep a sense of humor about all this you know.