So the left is still ranting and raving over President Trump's now being implemented temporary travel ban against those from six muslim countries who are trying to enter our country. Saying it is still a muslim ban and that it is overt discrimination against those of the religion of islam, I say so what if in reality it is a muslim ban as it's muslims...the sole practitioners of islam which by the way is NOT a religion but an all-encompassing political ideology...whose sole goal is to see we infidels all dead. And really, if truth be told, President Trump should make it a permanent ban as he has every right to make sure our country does NOT go the way of muslim-invaded Europe.
Posted by Diane Sori at 12:31 PM No comments: 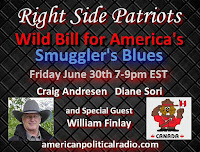 TODAY, Friday, June 30th from 7 to 9pm.EST on American Political Radio, RIGHT SIDE PATRIOTS Craig Andresen and Diane Sori's special guest will be William Finlay aka WILD BILL FOR AMERICA. This is one show you do not want to miss as Wild Bill will be discussing his Canadian arrest nightmare he calls 'Smuggler's Blues.'

Hope you can tune in at:
https://americanpoliticalradio.com/listenlive
Posted by Diane Sori at 11:20 AM No comments:

Kate's Law, which mandates a minimum five-year prison sentence for anyone who reenters the country illegally at least twice after being deported, passed the House of Representatives on Thursday with a vote of 257 to 157.

Kate Steinle was just 32 years old when she was murdered by an illegal immigrant in San Francisco in July 2015. Her murderer had been deported five times. He should not have been in the United States. Yet, there he was, sheltered in a sanctuary city.

Rep. Bob Goodlatte (R-VA) introduced Kate’s Law in the House and Sen. Ted Cruz (R-TX), who first introduced the legislation in July 2015, brought it back to the Senate this past January.

The House also passed the No Sanctuary for Criminals Act on Thursday, which would strip any city from federal funding if they refuse to cooperate with immigration officials.

President Trump has often met with families who have lost loved ones to illegal immigrant crime, even inviting many to come on the campaign trail with him last year. He hosted many of these grieving families Wednesday night at the White House, on the eve of the important immigration votes, where he told them that their loved ones did not die in vain.

The House of Representatives passed the No Sanctuary for Criminals Act by a 228-195 vote Thursday which bars federal funds from sanctuary cities if they do not cooperate with federal immigration enforcement efforts. The vote was largely along party lines with three Democrats voting for the bill and seven Republicans voting against it.

The measure, introduced by Rep. Bob Goodlatte (R-VA), would also allow victims of crimes committed by illegal immigrants the ability to sue sanctuary cities if they “released the alien from custody prior to the commission of such crime as a consequence of the State or political subdivision’s declining to honor a detainer.”

The White House is very supportive of the measure saying it would “ensure that American taxpayers are not subsidizing States and localities that work to affirmatively thwart Federal law enforcement efforts.”

President Trump personally met with victims of crimes committed by illegal immigrants Wednesday including the mother of 21-year-old Sarah Root who was killed last year by an illegal immigrant drunk driver. Provisions of the bill, requiring pretrial detention for illegal immigrants who kill, are named “Sarah’s Law.” Root’s killer is still a fugitive after being released on bail.

The House also passed Kate’s Law Thursday which requires a five year prison sentence for anyone who reenters the country illegally after being deported twice.

Speaker of the House Paul Ryan praised the passage of the immigration bills saying the House is taking action to enforce the law.

Susan Rice, Obama’s former National Security Advisor and UN Ambassador, will testify behind closed doors before a House Intelligence Committee next month as part of their investigation into Russian interference in the 2016 election, CNN reported Thursday citing sources familiar with the private talks.

Rice initially denied any knowledge of unmasking during her time in the White House, but then changed her story during an interview, telling MSNBC that she unmasked individuals for the sake of national security.

"We only do it to protect the American people and to do our jobs." Rice said, denying surveillance of Trump officials for political purposes. "I leaked nothing to nobody and never have and never would."

"Ambassador Rice is cooperating with bipartisan Russia investigations conducted by the Intelligence Committees as she said she would," said Erin Pelton, a spokesperson for Rice, told CNN.

Rice turned down a request in May to testify before a Senate Judiciary subcommittee. Rice's testimony before the House Intelligence Committee will be a closed-door session and is expected to take place before the House leaves for August recess.
Posted by Diane Sori at 10:54 AM No comments:

More bombshells from the media’s civil war department. Today CNN was exposed, yet again, as the fool and the liar. In the wake of yesterday’s bombshell fake news revelation, “CNN Producer Says Russia Narrative “bullsh*t,” comes further proof of the anti-Trump media conspiracy. Their lily-livered response yesterday was that it was just a one-off. Van Jones says differently.

Not only do they fake the news, they stage it as well. What makes this particularly dangerous is that these seditionists collude with Democrats in power.

Further confirmation of the uber-left propaganda war machine — Pravda had nothing on these destroyers.

Of course there’s no there there. It was never about truth or reality, it was always about destroying Trump and the freedom-loving movement that elected him our President.

The elite enemedia hires the most vicious trolls, the bottom of the proverbial barrel, the more effective street fighters.