Par for the Course
By: Diane Sori

Our ever-loving America-hating president as expected butt into the Charleston shootings blaming the 'bad gun' and NOT the shooter. Calling again for gun control he chastized we gun owners and our beloved country instead of the racist nutjob who pulled the trigger. Spewing the lie...and I do mean LIE...that we best “reckon with the fact that this type of mass violence does not happen in other advanced countries," in Obama's twisted liberal mind guns get off the table, load themselves, and pull their own trigger...the shooter is but a side note. Our Second Amendment rights will soon be under attack with a vengence and now he has the racial element to add into the mix...so be forewarned of what's coming. 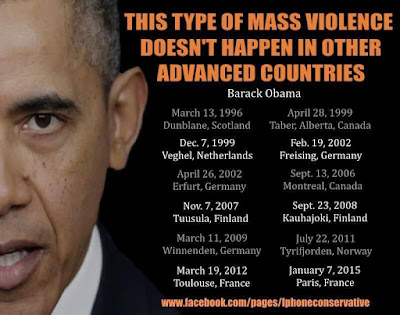 Why are we Ignoring a Cyber Pearl Harbor?

What if a team of Chinese agents had broken into the Pentagon or -- less box office but just as bad -- the U.S. Office of Personnel Management and carted out classified documents?

The next day, the newspapers and morning TV shows would show pictures of the broken locks and rummaged filing cabinets. And if we caught the Chinese spies in the act, perp-walking them for the world to see? Boy howdy.

My hunch is that the airwaves would be full of people talking about how "this was an act of war." And I have no doubt that if the situation were reversed and we had sent our team to Beijing, the Chinese would definitely see it as an act of war.

Meanwhile, in real life, it was revealed last week that the Chinese stole millions of personnel files and mountains of background-check information from the U.S. government. I suppose I should say the Chinese "allegedly" stole the information, but many lawmakers, government officials, anonymous intelligence sources and industry experts are convinced that the Chinese did it. Besides, we normally use "allegedly" in such cases because we don't want to prejudice a jury -- and this case is never, ever going to court.

The damage is hard to exaggerate. Former NSA counterintelligence officer John Schindler calls it a "disaster" in a column headlined "China's hack just wrecked American espionage." Joel Brenner, America's top counterintelligence official from 2006 to 2009, says the stolen data amounts to the "crown jewels" of American intelligence. "This tells the Chinese the identities of almost everybody who has got a United States security clearance," he told the Associated Press.

Countless current and past federal employees are now extremely vulnerable to blackmail and even recruitment by Chinese intelligence operatives. Millions are open to identity theft (the files included all of their personal information, including Social Security numbers, and in many cases medical, family, romantic and substance-abuse histories). My wife, who previously worked for the Justice Department, may have lived a fine and upstanding life, but I don't relish the fact that some chain-smoking Chinese bureaucrat is going over her personal information.

Many are calling it a "cyber Pearl Harbor."

Last weekend, former Republican presidential nominee Mitt Romney sat down with Katie Couric for an interview in Park City, Utah.
As it happens, he was in the Beehive State for the annual E2 Summit leadership conference, which he hosts every year.

And while the newsiest item to come out of that conversation was that Romney, for the umpteenth time, said he's done running for office, he also staunchly defended Sen. Marco Rubio (R-FL) from recent attacks.

In particular, he skewered the The New York Times for suggesting that Rubio was reckless with money because he had purchased a small, $80,000 fishing boat with generous proceeds he received from the publication of his first book. This was not, as the Times put it, he argued, an “extravagant purchase.”

“Oh, I thought the article was an extraordinary cheap shot,” he said. “It wasn’t a new low for the Times, but it was another low.”

“I kept looking for some big scandal here,” he added. “There was nothing.”

In fact, he said that the reason Rubio was spending so heavily was mostly because he did not come from wealth, and therefore had routine debts to repay.

“He just paid off his student loans,” Romney explained. “[And] guess what? A lot of people in this country have student loans. And they’re going to identify with a person who wasn’t born with wealth — who didn’t make a fortune — but is somebody who’s lived on a paycheck, and understands those struggles.”

Romney also denied that his campaign team “flagged” Rubio in 2012 for financial mismanagement during their VP search.

That part of the Times’ reporting, he added, was “not accurate.”

As I wrote recently, Muhammad is now the man we all must love. Clear Channel, as my AFDI colleague Pamela Geller explains here, shows what that means: they readily accepted the Muslim Brotherhood group ICNA’s deceptive ad about Muhammad, but refused our ad critical of Muhammad, and even refused our ad quoting Muhammad from mainstream […]

Last night I appeared on Greta Van Susteren’s On the Record on the FOX News Channel. Unlike the brief TV segment, Greta conducted an in-depth interview with me on her radio podcast, “Greta Talk.”


Fox News Radio: Pamela Geller: “I Will Not Let Violent Threats Intimidate Me!”

Talk about rocketing into the public arena – Pamela Geller may have been an unknown until recently, but now she’s not only a strong voice against Islamic Jihadists… she’s a target. Literally. The guest on this episode of Greta Talk has been the target of assassination attempts since she started her campaign against them and what she refers to as...