Just a Thought...
A Traitor on Trial
By: Diane Sori / The Patriot Factor

Bowe Bergdahl will plead guilty today...6 brave soldiers died looking for this traitor...he needs to be #7. And Bergdahl walking into trial in his 'dress blues' is a sickening image, especially with him now saying that because of Donald Trump his trial is a 'kangaroo court.' A rope or a bullet...either one will do.

While a number of Democratic lawmakers who received donations from Harvey Weinstein have pledged to give the money back or donate it to charitable causes, not surprisingly, the Clinton Foundation said it will not return as much as $250,000 in contributions from the Hollywood producer.

The foundation’s decision comes after dozens of women came forward to accuse the movie mogul of rape, sexual assault, and harassment.

Weinstein’s donations, which ranged between $100,000-$250,000, were already spent on charitable causes, the foundation told The Daily Mail.


The spokesman said the foundation already spent the money on its programs, such as lowering the cost of HIV medication and supporting women and girls in developing countries.

The foundation said it supports commitments to combat human trafficking, and runs the No Ceilings Project ‘which aims to advance the full participation of girls and women around the world’ through ‘data-driven analysis on gender inequality, an in-depth conversation series, innovative partnerships, and CGI commitments.’ (Daily Mail)

Well then, by all means, we must not provoke the poor dears. Everyone knows that, right? If we just refrain from doing things that provoke Muslims and poke them in the eye, everything will be all right, no? Isn’t that why virtually the entire Western establishment media avoided reprinting the Muhammad cartoons that Muslims used […]
Read in browser »

More craven surrender. Who are these cowards to erase our heritage. Despicable.

Joining a growing trend in Europe to abolish Christian imagery to avoidoffending other "sensibilities," Nestle has removed the image of a Christian cross from its Greek yougurt packaging featuring an Orthodox church on the island of Santorini.

Whereas in real life the blue dome of the iconic Anastasis church is surmounted by a white cross, the image of the church used for publicity has been photo-shopped to remove the offending Christian symbol. 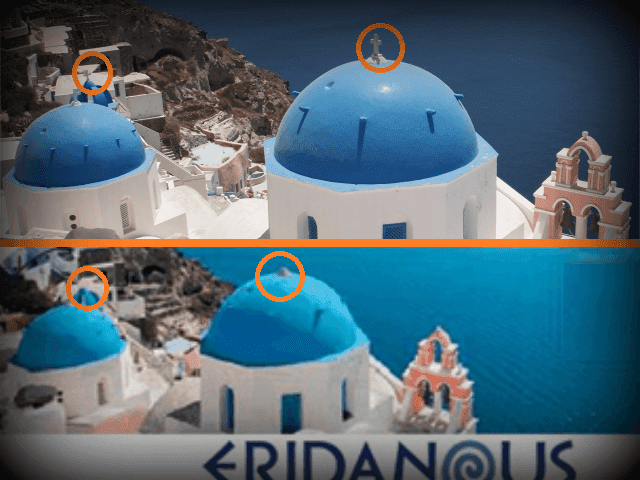 In eliminating the cross, Nestlé, the world’s largest food and beverage company, has mimicked the choice of supermarket giant Lidl for its similar packaging. To justify its decision, Lidl said they were expunging the cross so as “not to hurt sensibility of other religions.”