A Special Tribute Gone Unnoticed by the Media

On September 11, 2014, those who attended the game said it was extremely emotional to see the entire bowl of the stadium turn red, white and blue.
It took 90 workers two weeks to get all of the colored card boards mounted under each seat.  Each piece of card board had eye slits in them so the fans could hold
up the colored sheet and still see through the eye slits.  Every seat had to have
the proper card, with no mistakes, to make this happen.

This is what ESPN failed to show you Monday night,
Apparently, they thought their commercials were more important than showing this scene for about 5 seconds. 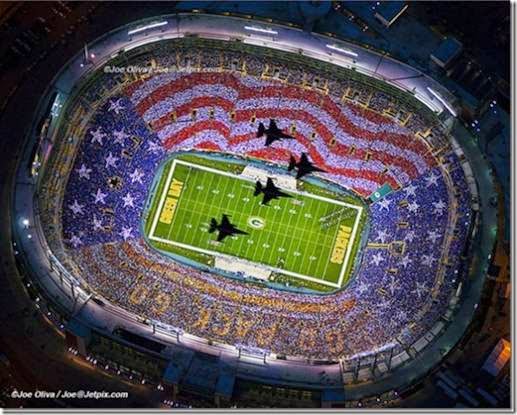 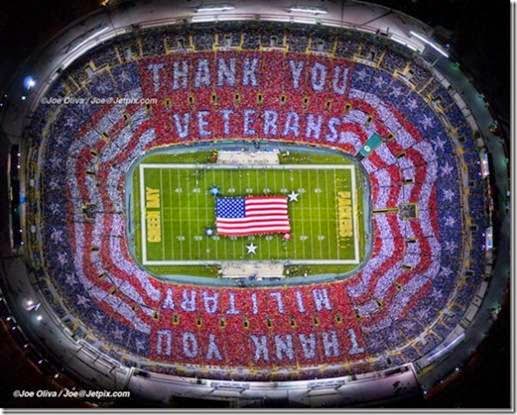 Hosted by Craig Andresen and Diane Sori of RIGHT SIDE PATRIOTS.


Be sure to tune in to the show for complete election coverage and commentary at... http://cprworldwidemedia.com/live-radio/
And join our listening chat audience at...
https://www.facebook.com/groups/cprworldwidemedia/ 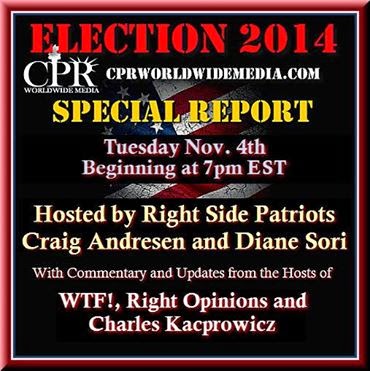 A Liberal Democrat’s View of Islam…

I get a lot of mail, and much as I wish could share more with you, I would be remiss if I didn’t post this email.

First, I wanted to thank you for coining “In a battle between a savage and a civilized man…”, as I feel it succinctly sums up everything at stake. At the end of the day, we might not see eye to eye on many issues, but I respect your opinions. Its tolerance. Its the golden rule. Its the bedrock of western society. We can agree, disagree, vote, debate and argue, if a law is written that we oppose, we can petition the government for its removal.

We can engage in other forms of protest. That’s democracy, that’s America.

The reason I’m writing to you is I just had the opportunity to watch your address...

“SFR leader Jamal Maarouf accused al-Nusra of treachery in a video released online, as the two rebel groups had shared cordial relations before the latter suddenly launched a surprise offensive last week.” What? “The two rebel groups had shared cordial relations” until last week, and yet one of them is receiving American weaponry that is supposed to be going to “moderates” who are fighting the “extremists”? That means that unless the Syrian Revolutionaries Front received these anti-tank missiles almost immediately before the al-Nusra jihadists captured them, the U.S. supplied them to a group that had “cordial relations” with one of the “extremist” groups it was supposed to be fighting. “Vetted moderates” indeed — the entire Obama foreign policy is based on fantasy and wishful thinking.


Weaponry supplied by the US to moderate Syrian rebels was feared to have fallen into the hands of jihadist militants affiliated to al-Qaida after clashes between rival groups.

Washington relied on SFR and Harakat Hazm to counter Isis (Islamic State) militants on the ground in Syria, complementing its air strikes.

It has thus been supplying them with heavy weapons, including TOW anti-tank missiles in recent months.

The London-based Syrian Observatory for Human Rights (SOHR) said that, after five days of fighting, the moderate rebels have now surrendered to al-Nusra, which is listed by the US as a terrorist organisation.

“Some of the rebels swore allegiance to al-Nusra, others fled,” SOHR said.

After the takeover, Twitter accounts liked to the Islamist group claimed that US weapons were among the stockpiles confiscated by the group.

8 Founders Advise How to Vote

Vice President Joe Biden was exactly right when he said as he campaigned in Iowa on Oct. 27, "Folks, this election is even more important than the two elections you elected Barack and me." With President Obama's approval rating tanking to 38 percent in September, I can understand why Biden is shaking in his boots.

The fact is that this election can serve for the 6 in 10 voters who are disappointed with the administration as a mega-loudspeaker and overarching referendum. As a way of showing the potential power of that vote, I want to share what America's founders told us.

This is what eight Founding Fathers want you to remember as you go to the polls and draw the curtain on that voting booth. (A special thanks goes to David Barton from WallBuilders for providing this information at http://www.wallbuilders.com.)

Samuel Adams, organizer of the Boston Tea Party and signer of the Declaration of Independence, wrote: "Nothing is more essential to the establishment of manners in a State than that all persons employed in places of power and trust be men of unexceptionable characters. The public cannot be too curious concerning the character of public men."

John Adams, our second president, wrote: "We electors have an important constitutional power placed in our hands; we have a check upon two branches of the legislature, as each branch has upon the other two; the power I mean of electing, at stated periods, one branch, which branch has the power of electing another. It becomes necessary to every (citizen) then, to be in some degree a statesman, and to examine and judge for himself of the tendency of political principles and measures.

One of the biggest voter frauds may be the idea promoted by Attorney General Eric Holder and others that there is no voter fraud, that laws requiring voters to have a photo identification are just attempts to suppress black voting.

Reporter John Fund has written three books on voter fraud and a recent survey by Old Dominion University indicates that there are more than a million registered voters who are not citizens, and who therefore are not legally entitled to vote.

The most devastating account of voter fraud may be in the book "Injustice" by J. Christian Adams.

One of these frauds involved sending out absentee ballots to people who had never asked for them.

Then a political operator would show up -- uninvited -- the day the ballots arrived and "help" the voter to fill them out. Sometimes the intruders simply took the ballots, filled them out and forged the signatures of the voters.

These were illegal votes for Democrats, which may well be why Eric Holder sees no evil, hears no evil and speaks no evil.

Tea party favorite Sen. Ted Cruz tells The Washington Post he'll urge his fellow Republicans to join him in taking on President Barack Obama if they take control of the Senate as expected in Tuesday's midterms. But he wouldn't promise to support the leadership of current Minority Leader Mitch McConnell.

Cruz told the Post he would first push for hearings on Obama's leadership, "looking at the abuse of power, the executive abuse, the regulatory abuse, the lawlessness that sadly has pervaded this administration."

He also wants the Senate to try to vote to repeal Obamacare, as the House has done more than 50 times. Should that effort fail, Cruz said he would like to take on aspects of the law piece by piece.

The Post said Cruz, a first-term senator, would not pledge to back McConnell as majority leader. Cruz has seen McConnell as part of the GOP establishment, and McConnell and his more moderate supporters don't like some of Cruz's actions, including leading the partial government shutdown in October 2013 that took attention away from the failed Obamacare website.

Cruz prefers direct pressure on Obama rather than the indirect method of adding amendments to bill, the Post said. That way, Cruz said, "you have clear accountability. It becomes transparent to everyone that it is the Democrats blocking meaningful progress."

Rep. Pete King of New York has long been a critic of the tea party in general and Cruz in particular.

"He is the last one we should listen to," King told the Post. "Don’t forget — a year ago he brought Republicans over the cliff."

But Cruz, who has not answered whether he'll run for president, said that it is time to stop nominating moderates.

"At some point, after Gerald Ford and Bob Dole and John McCain and Mitt Romney . . . we shouldn’t keep making the same mistakes over and over again," he said.