Just a Thought...
Saying Bye-Bye to Their Tax-Exemption
By: Diane Sori / The Patriot Factor

If Christ Church does remove the plaques dedicated to George Washington and General Lee then they need to have their 501(c)(3) tax-exempt status removed poste-haste,
Posted by Diane Sori at 5:10 PM No comments:

Email ThisBlogThis!Share to TwitterShare to FacebookShare to Pinterest
Dershowitz: Manafort 'Knows Where the Bodies are Buried" 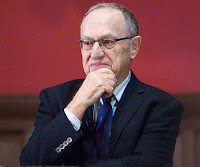 The charges filed against President Donald Trump's former campaign manager Paul Manafort and his deputy, Rick Gates, "apparently has nothing to do with Trump," but will be used as leverage toward the president and his campaign, Harvard Law professor emeritus Alan Dershowitz said Monday, as Manafort "knows where the bodies are buried."

"It's all about leverage," Dershowitz told Fox News' "Fox and Friends" program. "They're going after Manafort on something that apparently has nothing to do with Trump, years ago, his own business."

"The one thing is the Trump people did move quick to get rid of Manafort once his European ties came up," Fox News' Brian Kilmeade pointed out, recalling Manafort's firing during the campaign.
"That will help Trump distance himself," said Dershowitz. "But Manafort knows where the bodies are buried. He was an intimate, and if anything wrong happened in the campaign, and there's no evidence anything did, Manafort would know about it, even if he wasn't directly there, he would have hear

But, said Dershowitz, federal officials will use those charges to push for information about Trump and whether his campaign colluded with Russia during the 2016 election.

Antifa and other Leftist groups met with al-Qaeda and ISIS, plot to destroy Trump

Antifa and the left are no different from al Qaeda, Hamas, ISIS, etc. – totalitarian, genocidal ideologies. Their partnership is a natural fit.


‘There is clearly overwhelming evidence that there are growing ties between U.S. radicals and the Islamic State, as well as several [ISIS] offshoots and splinter groups,’ stated the FBI field report, which was delivered to Acting Director Andrew McCabe on July 11, 2017, and which is being published for the first time in my new book All Out War: The Plot to Destroy Trump.

ISIS connection to US anarchists revealed in Ed Klein book

And the uniformly leftwing elites in media, academia, and the culture work furiously to disarm the American people in the gravest threat to our freedom and our very way of life. Read the whole story in FATWA: HUNTED IN AMERICA.

Related: Ex-Antifa member: the group is a “threat to society,” “more dangerous than ISIS”

Posted by Diane Sori at 1:19 PM No comments: