CNS News reports that Democratic lawmakers in California have introduced a bill to allow illegal aliens and non-citizens eligible for leadership positions within state political parties.

Melanie Arter reports that "current state law limits noncitizen participation in party politics, but the bill, SB 288, would change that, letting noncitizens, including illegal immigrants like Dreamers, serve as state convention delegates and county committee leaders within the Democratic Party, which will allow them to be involved with party platform and other issues."

Supporters say that the proposed legislation is about showing welcoming support for all immigrant groups. “We need to continue to send a very, very loud message that we are … going to embrace and uplift and support all American immigrant neighbors,” said Sen. Scott Weiner (D-San Francisco), who introduced the bill.

Europe is bracing for another flood of Muslim migrants coming in from Libya. 660,000 migrants are trying to find ways to get into Europe but the won’t have any luck with Italy. Italian leader Matteo Salvini has stepped up efforts to protect Italy’s borders from illegal migrants. As the migrant pressure builds in Libya, it […]
Read in browser »

Email ThisBlogThis!Share to TwitterShare to FacebookShare to Pinterest
ICE Releases List Of Murders And Rapists Protected Under Sanctuary City Policies

There is a madness afoot in the Democrat party. Why are they working so furiously to bring in these illegals and keep them on our streets. Votes, man, votes.

Immigration and Customs Enforcement (ICE) released a list of criminal illegal aliens who were released from jail due to sanctuary city policies, many of whom went on to commit other crimes.

Washington and Oregon, two states under Democratic Party control, have enacted some of the strongest sanctuary laws in the country that protect illegal immigrants from federal apprehension. Washington Democratic Gov. Jay Inslee signed legislation in May that prohibits local jails and state prisons from honoring ICE detainers, and bars them notifying ICE when a suspected illegal immigrant is about to be released from their custody.

Read entire article here: https://gellerreport.com/2019/07/murderers-rapists-illegals-given-sanctuary.html/
Posted by Diane Sori at 8:18 AM No comments: 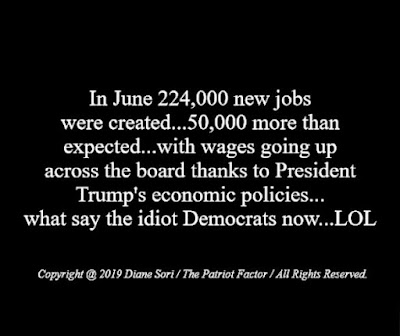 Posted by Diane Sori at 7:16 AM No comments: