“I think there are some people who believe in gun control,” the Texas congressman told Carlson. “I don’t believe in gun control. I think you can have responsible people do the right thing with a gun but unfortunately sometimes you get a situation like this that it’s hard to explain but just taking guns away from everybody is not going to solve the issue.”

Carlson then wanted to know why people keep making that argument.

“Can you think of a single place in the United States that has become safe because of gun control?” he asked Cuellar.

“No,” the congressman quickly answered.

“Right,” Carlson said. “I don’t think anyone else can think of when either so why do people keep proposing it?”

More of the global outbreak of mental illness? In any case, this would be easier to take seriously were it not for the fact that officials so often ascribe what are obviously jihad attacks to mental illness. This man planned his attack carefully over a long period of time. If he was mentally ill, he […]
Read in browser »

The Islamic State (IS) issued a formal communique claiming credit for the Las Vegas shooting, identifying the perpetrator as “Abu Abdul Barr al-Amriki” and declaring that he heeded the response of IS leader Abu Bakr al-Baghdadi to attack coalition countries.

Text in the communique similar to others by ISIS, tho first to frame attack as “response”specifically to”Baghdadi”

ISIS gives unverifiable (as of yet) narrative: Paddock, responding to Baghdadi’s incitements, did “precise” surveillance of venue prior.

TODAY, Tuesday, October 3rd from 7 to 9pm EST on American Political Radio, RIGHT SIDE PATRIOTS Craig Andresen and Diane Sori take on the 'holier than thou' sorts who think their word, their way, their church, and their politics should be the defining foundation of today's America. If you think RIGHT SIDE PATRIOTS stance on 'take a knee' was tough you ain't seen nothing yet.

Hope you will tune in: http://listen.samcloud.com/w/73891/American-Political-Radio#history
Posted by Diane Sori at 9:07 AM No comments:

Email ThisBlogThis!Share to TwitterShare to FacebookShare to Pinterest
Labels: American Political Radio, Craig Andresen, Diane Sori, Right Side Patriots
RIGHT SIDE PATRIOTS...for those who missed last night's broadcast (or just want to listen in again) where Craig and Diane presented their SPECIAL REPORT: 'Broken Windows - Shattered Lives...What We Know About the Mandalay Bay Massacre'....you can listen to it at your convenience on SoundCloud at: https://soundcloud.com/right-side-patriots-260798913/right-side-patriots-10217 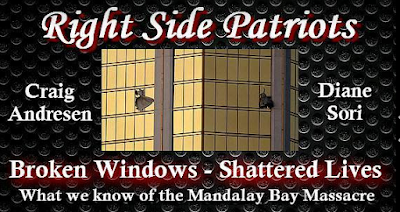