Tomorrow, Friday, June 30th from 7 to 9pm.on American Political Radio, RIGHT SIDE PATRIOTS Craig Andresen and Diane Sori's special guest will be William Finlay aka Wild Bill for America. This is one show you do not want to miss as Wild Bill will be discussing his Canadian arrest nightmare.

Hope you can tune in at:
https://americanpoliticalradio.com/listenlive 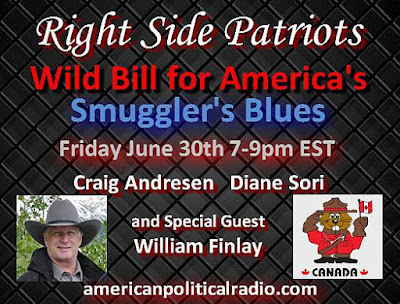 The United States Senate has just 35 working days until the end of the fiscal year on Sept. 30, and that’s assuming Mondays and Fridays are indeed used for deliberation.


One thing is totally clear: There isn’t time to deal with the issues that demand immediate attention.

The only appropriate response is to cancel, or heavily truncate, the annual August recess that turns the United States Capitol into a ghost town.

They gave us a probationary period to turn the conservative policies we champion into actual results.

The expectations are high and we’ve made some progress. We’ve confirmed Justice Neil Gorsuch to the Supreme Court and we’ve taken on the boldest rollback of federal regulations since President Ronald Reagan was in office.

We’ve gotten President Donald Trump’s Cabinet in place and made some headway on health care, but all of this consumed the first half of the year.

The American people are expecting us to get much more done. Five imperatives must be accomplished in short order.

On Monday, the Supreme Court decided against hearing a case involving the right to carry a firearm outside of one's home. California resident Edward Peruta had challenged a state law limiting gun-carrying permits to those showing "good cause."

Although the right to carry has been a hot topic across the country, Peruta v. California did not interest at least four of the justices, so it will not be added to their docket at this time.

That really peeved off Justices Clarence Thomas, who dissented from the bench.

Muslims are commanded to obey their religion with especial strictness during the time of Ramadan. Too often, this results in a higher number of terrorist attacks all through Islam’s “holiest” month. (Photo: Mourners embrace each other following the jihad attack at London Bridge — which happened during Islam’s holiest month of Ramadan) TheReligionOfPeace.com has documented […]

Posted by Diane Sori at 9:22 AM No comments:

The Trump administration has set new criteria for visa applicants from six mainly Muslim nations and all refugees who require a "close" family or business tie to the United States.

The move comes the same week the Supreme Court partially restored President Donald Trump's executive order, which was widely criticized as a ban on Muslims.

Visas that have already been approved will not be revoked, but instructions issued by the State Department on Wednesday said that new applicants from Syria, Sudan, Somalia, Libya, Iran and Yemen must prove a relationship with a parent, spouse, child, adult son or daughter, son-in-law, daughter-in-law or sibling already in the United States to be eligible. The same requirement, with some exceptions, holds for would-be refugees from all nations still awaiting approval for admission to the U.S.

Grandparents, grandchildren, aunts, uncles, nieces, nephews, cousins, brothers-in-law and sisters-in-law, fiancés or other extended family members are not considered to be close relationships, according to the guidelines issued in a cable sent to all U.S. embassies and consulates late on Wednesday. The new rules take effect at 8 p.m. ET on Thursday, according to the cable, which was obtained by The Associated Press.

More of the poisonous fruit of President Obama’s nuclear pact with the genocidal Islamic Republic of Iran.

Israel’s enemies couldn’t be clearer about their intentions, yet the world turns a blind eye.

t is astounding that no matter how often or how clearly Israel’s enemies declare their nefarious intentions to destroy the Jewish State, the international community turns a blind eye.

With Iranian influence growing exponentially in Lebanon, The JPost’s Seth Frantzman took to the border to report on the current, hostile climate:

Lebanon seems to be having a flag sale. Iranian flags, Hezbollah, the UN, Spain, Palestinian flags. They are all flying provocatively along the border with the northern Israeli community of Metulla. Just meters from the fence that separates the countries, not far from the site of a 1985 terror attack, Hezbollah has festooned the roads with signs of its presence. It’s purposely done so Israeli residents can see the flags and the billboards next to them. In Metulla there is a memorial for the 12 Israeli soldiers killed in the 1985 suicide bombing, while just across the border a huge billboard celebrates the same killing.

Posted by Diane Sori at 8:58 AM No comments: