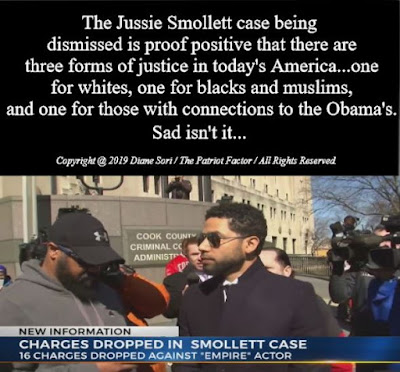 Email ThisBlogThis!Share to TwitterShare to FacebookShare to Pinterest
Labels: case dismissed, Jussie Smollett, justice, Obama
RIGHT SIDE PATRIOTS...for those who missed last night's show (or just want to listen in again) where Craig Andresen and Diane Sori discussed 'In Fear of Retribution'; 'An Apology to John...A Legend in his Own Mind'; and important news of the day...you can listen to it (and previous shows) at your convenience on our PodBean hosting/archive site. Click here: https://rightsidepatriots.podbean.com/ to go directly to our podcasts and hope you become 'followers' of RIGHT SIDE PATRIOTS. And our podcasts are now also on Spotify at: https://tinyurl.com/y76xxz8q

Senate Majority Leader Mitch McConnell (R-KY) on Tuesday forced a vote on Rep. Alexandria Ocasio-Cortez's (D-NY) coveted "Green New Deal" legislation, which was supposed to be the end all, be of all of addressing climate change. When the legislation was first introduced, Democrats latched onto the bill with support. Even presidential candidates, like Sens. Kamala Harris, Cory Booker, Kristen Gillibrand and Elizabeth Warren, supported the bill. But when it came time to put their money where their mouth was and actually vote, they couldn't even decide how to vote. They voted "present."

Not one single Democrat, including Sen. Ed Markey (D-MA), the bill's co-sponsor voted in favor of the legislation.

Conservatives sounded off on the rather ironic move:

I was reliably informed that the Green New Deal was both incredibly popular and deeply necessary to save the planet. Yet not a single Democrat voted for it. Clearly they do not care about the children. We're all dead in 12 years, guys.
— Ben Shapiro (@benshapiro) March 26, 2019

Canada rejects Israel’s needs to defend itself, does not recognize its control over Golan Heights
By Christine Douglass-Williams / Jihad Watch

Israeli Prime Minister Benjamin Netanyahu on his visit to the White House witnessed President Trump sign a proclamation that the U.S. officially recognizes the Golan Heights as Israeli territory. Israel captured the Golan Heights from Syria in the 1967 Six-Day War and annexed it in 1981. This was no different from the situation of many […]
Read in browser »

Posted by Diane Sori at 7:01 AM No comments:

Prime Minister Netanyahu hits back at antisemite Omar: Support for Israel is about shared values, not ‘the Benjamins’

Schooling the jihadi hater but “shared values” of freedom, individual rights, and equality for all is lost on a Jew-hating sharia supremacist.

Netanyahu hits back at Omar: Support for Israel is about shared values, not ‘the Benjamins’


Israeli Prime Minister Benjamin Netanyahu on Tuesday pushed back against comments made by Rep. Ilhan Omar (D-Minn.), who had drawn bipartisan criticism after saying that politicians’ support for Israel was “all about the Benjamins.”

“From this Benjamin, it’s not about the Benjamins,” Netanyahu said in a speech delivered through a video call at a conference of the American Israel Public Affairs Committee (AIPAC). “The reason … is not because they want our money. It’s because they share our values.”

SMOLLETT MAY NOT BE IN THE CLEAR YET: Despite the hate crime hoax charges against him being dropped Tuesday, “Empire” star Jussie Smollett still may face new legal trouble ...  An investigation into a death-threat letter the actor supposedly received prior to an alleged Jan. 29 attack against him has been handed over to the FBI, Chicago Police spokesman Anthony Guglielmi told Fox News. Cook County, Ill. First Assistant State's Attorney Joseph Magats told reporters that prosecutors dropped the case because Smollett forfeited a $10,000 bond payment and did community service