The ruling by U.S. District Court Judge Reed O'Connor stemmed from a challenge to the ban brought by a Texas firearms dealer and a couple from the District of Columbia in July 2014.
The federal law prohibits a dealer from transferring a handgun, but not a rifle or shotgun, to an individual who does not live in the state in which the dealer's business is located. […]

Andrew and Tracey Hanson met with licensed firearms dealer Fredric Mance Jr. in Texas about buying two handguns, but did not complete the transaction because they could not take immediate possession of the weapons, according to court papers.

Federal law required Mance to transfer the handguns to a federally licensed dealer where the Hansons live, Charles Sykes in the District of Columbia, where they could complete the purchase after paying shipping and transfer fees.

The Hansons and Mance, all members of the Citizens Committee for the Right to Keep and Bear Arms, argued in their lawsuit in the U.S. District Court for the Northern District of Texas that the ban limits consumer choices and infringes on their rights.

The Federal Bureau of Investigation is apprehensive about the State Department’s plan to resettle thousands of Syrian refugees in the United States. FBI Assistant Director Michael Steinbach said Wednesday that those seeking a new home would have to be thoroughly vetted before relocating to U.S. soil.


“I’m concerned,” Steinbach said under oath at a hearing of the House Committee on Homeland Security. “We’ll have to take a look at those lists and go through all the intelligence holdings and be very careful to try to identify connections to terrorist groups.”

The comment came in response to a direct question from the Committee Chairman Michael McCaul (R-TX), probing whether the refugees could possibly be a threat to American lives.

“The barbarians are at the gate,” McCaul said at the hearing. “We want to keep them outside the gate of the United States. I’m concerned that some are already returned.”

Reports released earlier this week indicate that thousands of individuals from western nations are streaming to the middle east to connect with extremist forces, and still possess western passports to return undetected to their home countries to potentially launch lone wolf attacks.

Nicholas Rasmussen, Director of Homeland Security National Counterterrorism Center, explained in his testimony that it is possible that there are far more operatives from Western nations that have travelled to conflict zones than U.S. intelligence agencies are aware.

“We estimate upwards of 150 Americans have traveled or attempted to travel to Syria to join extremist groups,” Steinbach testified. “However, once in Syria, it is very difficult to discern what happens there. This lack of clarity remains troubling to the IC.”

“The rate of foreign fighter travel to Syria is unprecedented,” Rasmussen added. “It exceeds the rate of travelers who went to Afghanistan and Pakistan, Iraq, Yemen, or Somalia at any point in the last 20 years.”

“Muhammad is the apostle of Allah. Those who follow him are merciful to one another, harsh to unbelievers” (Qur’an 48:29)

“Saudi TV host under fire for tweeting thanks to Jews, Christians,” Elder of Ziyon, February 12, 2015 (thanks to The Religion of Peace): 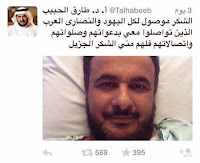 Professor Tariq Habib is a psychologist and TV host who is enormously popular in Saudi Arabia. His Twitter account is followed by nearly 5 million people.

Recently, he underwent a successful kidney transplant. Afterwards, he tweeted his thanks to Christians and Jews who wished him well and who said that they had him in their prayers.

This apparently was too much for many people. Habib  was violently criticized for that tweet.

Ever since, he has been justifying his decision to issue that tweet, saying that a simple expression of thanks does not mean that he believes that Judaism or Christianity are superior to Islam.

He even wrote an entire article slamming those who insulted him for the tweet and somewhat defensively justifying it:


The tyranny of the intellectual energy of verbal chattering, which includes violent attack and intolerance of others that are in some cases no less dangerous than the enemy’s offensive weapons, so that the preoccupation with insults and the culture of hatred is the most dangerous way to waste mental energy of the individual.

…The good word or phrases of thanksgiving or even giving gifts to the Jews and the Christians does not bless their faith or promotes a culture of loyalty to non-Muslims, but it is my job to the principles of Islam, which are based on justice, to appreciate the actions of others .. to demonstrate Islam’s moral pillars….

Obama is now openly hostile to the Jews:

GOP congressman upset that Jews are not mentioned in AUMF


Washington (CNN)Bipartisan criticism of President Barack Obama’s proposed authorization of force against ISIS mostly has to do with the use of U.S. troops and limits on the commander-in-chief. But one Republican lawmaker noticed something else that he calls quite troubling – omission of the word “Jews.”

Freshman Lee Zeldin is the only Republican Jewish member of Congress, and says it immediately lept off the page that the President’s proposed resolution specifically singles out...

We have been told that she died in a Jordanian bombing of an ISIS position. The Islamic terrorists sent photos of what was left of her to her hopeful parents and they confirmed that their daughter…poor Kayla Mueller was indeed…dead.

The mainstream media and even some Conservative leaning media organizations made her untimely and…tragic death…their front page news.

I just can’t bring myself to well up even a single crocodile tear for Kayla Mueller.

If you think she was killed in some Jordanian bombing of an ISIS position…might I suggest you put down the Kool Aid and take a sip of reality instead. ISIS most likely killed Mueller long before those bombings ever took place and we’ll most likely never know exactly how or when she died because ISIS was just looking for and taking advantage OF a crisis.