President Trump is meeting next week with Republican senators in a push to get a congressional tax reform bill on his desk by Christmas, with a final vote purportedly coming as early as Thursday.

Trump will join the Senate Republican Policy Committee on Tuesday for the group’s weekly luncheon, upon Congress returning from a week-long Thanksgiving break.

This is the second time in the past few weeks that the president has gone to Capitol Hill to persuade fellow Republicans in the GOP-controlled Senate to back the tax reform bill, with yes votes from several holdouts still needed to pass the measure with a simple, 51-vote majority.

Not Buying It: Linda Tripp Skewers Democrats Suddenly Speaking Out Against Bill Clinton

You may have noticed that Democrats are speaking out against former President Bill Clinton's history of sexual harassment - almost 20 years later. Sen. Kirsten Gillbrand (D-NY), for instance.

While Gillibrand is doing some commendable work to address the increasingly hostile work environment on Capitol Hill, one in which sexual assault victims are loath to report misdeeds, she is guilty of a bit of hypocrisy when it comes to her suddenly condemning President Clinton's actions.

Clinton should have "resigned" over his relationship with intern Monica Lewinsky, Gillibrand declared last week. Her remarks were not exactly convincing, considering she's been a longtime ally of the Clintons.

“Things have changed today, and I think under those circumstances there should be a very different reaction,” Gillibrand explained.

By "things have changed," she may mean that accusers are becoming bolder to share their stories. Several alleged victims of sexual harassment have come forward to the press to reveal sexual misconduct from congressmen like Sen. Al Franken (D-MN) and Rep. John Conyers (D-MI).

The Qur’an forbids Muslims to kill other Muslims (4:92), but if one group of Muslims thinks another is heretical, then it considers itself to have a duty before Allah to carry out the Sharia death penalty. “Attack on mosque in Egypt’s Sinai kills at least 155: state media,” AFP, November 24, 2017 (thanks to Ken): […]
Read in browser »

By Pamela Geller/ THE GELLER REPORT 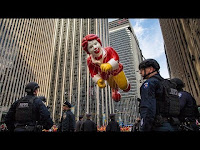 But above all – respect it!

Security at the upcoming Macy’s Thanksgiving Day Parade is nothing short of extensive, and pay close attention to new changes for the balloon inflation event on Wednesday.