Before he makes his exit on January 20, President Obama decided to permanently ban offshore drilling, and he’s confident that President-elect Donald J. Trump won’t be able to reverse it. The oil and gas industry disagrees, but legal challenges and possible congressional action may be needed to undo this order (via LA Times):


Invoking a rarely used provision in federal law, the Obama administration on Tuesday announced a permanent ban on offshore drilling in broad parts of the Arctic and Atlantic coasts — a sweeping and controversial move that will help secure the president’s environmental legacy even as critics vowed to reverse it.

The ban relies on the Outer Continental Shelf Lands Act of 1953, which says the president “may, from time to time, withdraw” federal waters from oil and gas development that are not already leased. It was announced as part of a joint action with Canada, where Prime Minister Justin Trudeau also made long-term, though not permanent, commitments to protect the Arctic from drilling.
[…]

Email ThisBlogThis!Share to TwitterShare to FacebookShare to Pinterest
Trump vows to “wipe out Islamist terrorists from the face of the earth” following Berlin jihad attack

The president elect vowed to “wipe out Islamist terrorists from the face of the Earth” after a driver ploughed a lorry through a crowded Christmas market in Germany. Trump also tweeted that the “civilized world must change thinking” and referenced Christians being slaughtered as “part of their global jihad.” Sadly, the “civilized world” has bought […]

According to NBC News, Obama opted to use the red phone to contact Moscow directly, a communication system that dates back to the Cold War. It's not an actual telephone, but instead sends a secure email message between the two countries.

"International law, including the law for armed conflict, applies to actions in cyberspace," part of the Oct. 31 message read, according to NBC. "We will hold Russia to those standards."

One of Obama's senior advisers reportedly told the president months ago that he should use the phrase "act of war" when it came to Russia's alleged meddling in the presidential election. Obama declined to use that term when the two leaders met at the September G-20 summit in China, instead telling Putin he should cease any election-hacking activities.

NBC connects Russia's alleged hacking with the release of stolen emails from Democrats, although WikiLeaks — the organization responsible for making much of the material public — denied Russia was behind the theft.

Obama's use of the red phone was the first time he had used the system during his presidency, NBC notes.
Posted by Diane Sori at 10:30 AM No comments:

Email ThisBlogThis!Share to TwitterShare to FacebookShare to Pinterest
“Motivation unclear.”

FOX News Radio said Russian ambassador was shot by Turkish policeman shouting “anti-Russian” slogans. No mention of “Allahu akbar.” No mention of “We have made an oath to Muhammad to die in martyrdom.” And no mention of “We are the descendants of those who supported the Prophet Muhammad, for jihad.”

The enemedia is scratching their heads (and their ….) as to why this devout Muslim assassinated the Russian ambassador, even though he screamed it at the top of his lungs.

The language of the conquered. Say it you, bloody cowards.

Watch. What’s the first thing this devout savage screams? And look at his proximity. It’s a total inside Erdogan job.

Read entire article and see video here: http://pamelageller.com/2016/12/ambassadors-assassin-soldier-islam-descendants-supported-prophet-muhammad-jihad.html/
Posted by Diane Sori at 9:59 AM No comments:

25. Will donate The Moo’s First Lady wardrobe to a traveling circus and freak-show

24. Will remove the urinal from The Moo’s private bathroom and replace it with a gold plated bidet for Melania

23. Will order all area rugs removed from the WH on the off chance they were used as prayer rugs these past 8 years

22. Will send the WH removed area/prayer rugs to Gitmo so Obama will feel more at home there

20. Will use Hillary’s industrial strength temporary facelift tapes to repair some of our nation’s infrastructure and bridges

19. Will appoint a special investigator to look for any signs of intelligent life in John ‘Swiftboat’ Kerry

18. Will order the words climate change to now officially and forever be known as the WEATHER

17. Will order Nancy Pelosi’s and Debbie Wasserman-Shultz’s mouths duct taped shut or require them to wear ‘Make America Great Again’ hats and ‘I love Donald Trump’ pins anytime they want or need to address the House

16. Will order all the celebrities who said they would leave the country if he won to actually leave

15. Will order Ben Carson to turn the UN building into public housing

14. Will appoint a task force to officially apologize for all the inappropriate and stupid things said by Uncle Joe ‘Bite-Me’ Biden

13. Will order any and all electronic devices...computers included...removed from Hillary’s possession

11. Will order the southern border wall to include LaLafornia

10. Will abolish the IRS and replace it with an IOU

9. Will write the forward to Bill O’Reilly’s next book...Killing ObamaCare

8. Will order Hillary to shut the hell up already and move on with her life...out of the political arena

7. Trump will travel to all the countries that Obama apologized to…and tell them to stick it where the sun don’t shine…in the nicest way he knows how

5. Will issue an order removing political correctness from our military by ordering the generals to get out there and kick some islamic ass

4. Will eliminate all czars except one...naming Vladimir Putin the honorary czar of Russia

3. As a gesture of good will we will send Cuba one working jeep to be used in Raul Castro’s funeral procession

2. Will issue a directive to ‘Mad Dog’ Mattis that one more word from that North Korean nincompoop will result in a 30-day carpet bombing north of the 38th parallel causing 10’s of dollars in damages

1. Will order the facebook gods to leave Diane Sori and Craig Andresen the hell alone 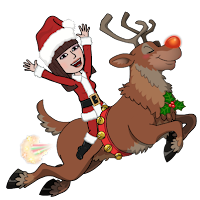 Merry Christmas and Happy Hanukkah
from
RIGHT SIDE PATRIOTS
Craig Andresen and Diane Sori
Posted by Diane Sori at 12:01 AM No comments:

If you missed last night's RIGHT SIDE PATRIOTS broadcast where Craig and I discussed Leaks, Hacks, and Rex Tillerson...the left's loony excuses for Hillary's loss...and presented an oh so snarky political parody of Trump's New Year's Resolutions...it will be repeated on American Political Radio tonight at midnight and throughout the week at: bit.ly/2cpXuRd