TERRIFIC NEWS! Matty’s back – Army soldier gets his missing war dog back

‘Stolen’ hero war dog has been located and is finally back with his rightful owner. Thank you BNI readers for all your calls and emails for Matty.

NY Post (h/t ADHD)  Days after The Post exposed the military’s wrongful, 16-month-long separation of injured Army Spc. Brent Grommet and his war dog, Matty, the two were finally reunited on Friday. “I’m about the happiest I’ve ever been,” Grommet, 23, told The Post.

Grommet and Matty, who specialized in detecting IEDs, were injured when one exploded near them in Afghanistan. Grommet came back with PTSD, traumatic brain injury, migraines, severe chronic back pain and breathing problems.

Under Robby’s Law — signed by Bill Clinton in 2000 — military dog handlers have the first right to adopt their animals if injured together. Upon returning from Afghanistan in July 2013, Grommet and Matty were separated by the Army, and Grommet never saw Matty again. “It’s like someone took your kid in front of you — and there’s nothing you can do about it,” Grommet said. 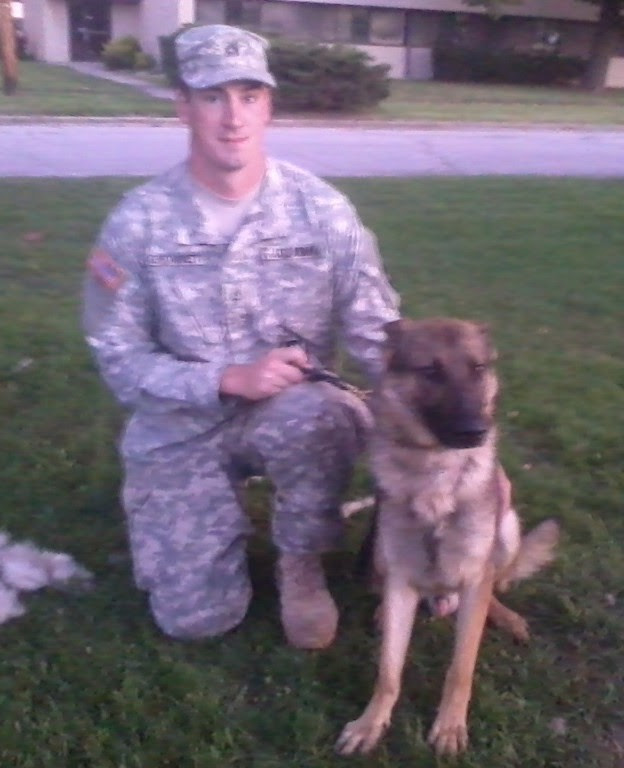 On Friday, Grommet and his parents drove 17 hours from Fort Campbell, Ky., to South Carolina, where Matty had been living since 2013. (Grommet had to sign a non-disclosure agreement to keep the identity of the South Carolina “owner” secret).

Grommet stopped about 25 feet away from Matty’s kennel, too nervous to see him. “I was a little worried he forgot me,” Grommet said. Then he called his name. When the kennel door opened, Matty charged. “He jumped all over me,” Grommet said. “I couldn’t have asked for a better response. I knew then that he remembered me, and truly wanted to be with me.”

Grommet told The Post that Matty will be the best medicine for all his war injuries. “It’s very hard to be upset around him,” Grommet said. “He brings a lot of light into everything.”

If 50 non-Muslims petitioned Walmart for anything — anything! — do you think Walmart would immediately cave? Neither do I. But when it comes to Muslims and the cruelty of halal slaughter, Walmart knew they would be facing headlines: “Islamophobia at Walmart!” “Walmart racist!” And who knows? Maybe even a visit from Obama’s DoJ would have been in their future.

“Walmart Just Bowed To Islamic Sharia Law To Appease Angry Muslims,” Mad World, November 13, 2014 (thanks to The Religion of Peace):

As America veers towards Islamic Sharia law in order to cater to the demanding minority of Muslims, citizens are seeing not only an attempt to include and appease Muslims, but an infringement...

“The Western world thinks there is no ISIS in their countries — that all the jihadis have gone to fight and die in Syria. But this man said, ‘No. We are sending our fighters to take their places.’”


ISTANBUL — Extremist fighters have been brought into mainland Europe, hidden amid boatloads of Syrian refugees, according to a veteran smuggler who claims to have done so himself.

The smuggler, who has been given the pseudonym Hassan here, said in an interview with BuzzFeed News that since the summer he has sent more than 10 Islamic State of Iraq and Syria (ISIS) fighters into Europe.

Hassan’s claim was impossible to verify — and Western officials said they’d seen no evidence that such a scenario was taking place. His testimony, plus that of a second human trafficker who offered a similar account, marked the first time someone claiming direct involvement has said publicly that such a plan is underway.

Hassan has worked in the trade for more than three years. He charges $2,500 for each refugee he sends to Europe from Turkey, shipping them by boat to Greece. He said he views it as “humanitarian work,” on top of the profit he makes. But he said he had grown uncomfortable with the dark turn this work has taken since he began allowing ISIS fighters to mix with the refugees on his crowded speedboats.

Hassan said the fighters were all Syrian or Iraqis posing as refugees. He believed they remained loyal to ISIS and were prepared to launch terrorist attacks in Europe. “They are waiting for their orders,” Hassan said. “Just wait. You will see.”

Fears of an ISIS attack in Europe have centered on the danger posed by the continent’s own citizens. Around 3,000 Europeans have joined ISIS, according to the European Union’s counter-terrorism chief, and there are longstanding concerns that some may return to sow terror at home. Recently, there have also been rumblings of an ISIS threat among the unending torrent of Syrian refugees. Some Western officials reportedly believe that ISIS has considered the same plot that Hassan described.

One official with the British government stressed that any potential threat from ISIS should be kept “in perspective.”

“We’re talking about millions of people that need help,” the official said. “We should not get to the stage where we start to fear Syrian refugees as a terrorist threat in Europe.”

Little Rock, Ark., is abuzz this weekend with Bill and Hillary Clinton holding court at a 10th anniversary celebration for the Clinton Presidential Center that's also a sort of pre-union for Hillary Clinton's anticipated 2016 run. But if insights into Hillary Clinton from her husband's former aides and advisers are what you're looking for, turn instead to the Miller Center at the University of Virginia, which on Friday released a series of transcripts from interviews for its Clinton oral history project.

Panetta, who was Bill Clinton's chief of staff long before his stints in the Obama administration, offers some of the more colorful observations in his interview, which was conducted in 2003:


There's no question that she was smart, she was dedicated, she understood the issue and people were a little intimidated by her. There were several meetings where she basically walked in and let everybody have it, very different from what the president would do. If she thought something was going wrong, she'd say it. She was much more confrontational in that sense.

When I became chief of staff, recognizing that she was an important factor, I went out of my way to make sure I briefed her on what was going on as chief of staff. But if she ultimately believed that you had the capacity to do a job, she backed off. She served as what I would call a chief of staff-in- waiting, in the sense that if she felt the chief of staff or whoever was not doing the job, she was prepared to protect the president. And she was very good at that.

The Obama presidency is a failed presidency. He has presided over one of the slowest economic recoveries in history. His foreign policy has been a disaster. ObamaCare is a mess. And it’s hard to lay the blame off on anyone else. The president didn’t make Republicans part of any of his decisions and most of the time he ignored congressional Democrats as well.

To make matters worse, Barack Obama is the most polarizing president we have had in the past 60 years. What makes that so strange is that we were all promised something completely different.

"The president came to Washington thinking he could change Washington, make it better, unite it and the nation."

On the campaign trail he [Obama} promised to:

"… turn the page on the ugly partisanship in Washington, so we can bring Democrats and Republicans together to pass an agenda that works for the American people."

In his first inaugural address, he [Obama] said:

"On this day, we gather because we have chosen hope over fear, unity of purpose over conflict and discord. On this day, we come to proclaim an end to the petty grievances and false promises, the recriminations and worn-out dogmas that for far too long have strangled our politics."

Saturday proved that the second time is not the charm for Obamacare. As the Affordable Care Act's second open enrollment got underway in Washington state, customers again found themselves unable to progress past the system's technical errors. The Guardian has the unfortunate, yet unsurprising, news:


Washington’s state’s healthcare exchange shut down after the first few hours of open enrollment on Saturday, as state officials and software engineers tried to resolve a problem with tax credit calculations.

Because of these glitches, officials at the Washington Healthplanfinder decided to shut the site down after just a few hours.

Washingtonians were perhaps hoping that their attempts to sign up for health care would go more smoothly than last year, when the system rejected people for minor errors like hyphens in their last names.

In case you missed last year's national Obamacare debacle, all you need to know is that healthcare.gov was a mess. Errors were apparent from start to finish. The website was so poorly designed and unprepared for visitors, that Health and Human Services Committee Secretary Kathleen Sebelius was grilled on Capitol Hill before she eventually decided to step down in April. If technical problems like these persist this year, I guess the new HHS secretary isn't going to escape the hot seat, either.

Another interesting tidbit I noticed regarding Washington's exchange site:


About a thousand people who bought insurance the first time around are still having problems getting their payments credited and that money transferred to their insurance companies.

All the government can say is, "Thanks for your patience."