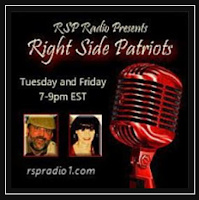 Today, Friday, May 7th, from 7 to 9pm EST, RIGHT SIDE PATRIOTS Craig Andresen and Diane Sori discuss, with no holds barred, things most folks are thinking but are too afraid to say; plus important news of the day.

Louisiana governor John Bel Edwards has already said he plans on vetoing a Constitutional Carry bill if it gets to his desk, but the Republican-dominated legislature appears undeterred by the threat. On Wednesday, the state House of Representatives overwhelmingly approved a permitless carry bill that would remove the need for legal gun owners to possess a carry license before they could bear arms in self-defense, with even some Democrats backing the change to state law.

The 73-28 vote in the House is large enough to override a veto by Edwards, but the outcome of a potential override vote in the Senate is still uncertain. The Senate has already passed its own version of a Constitutional Carry bill by a vote of 27-11, and if all 27 senators stick to their guns (no pun intended), the legislature could indeed bypass the governor’s objections. If a single senator switches their vote, however, the Constitutional Carry bill would die.

Of course, this is putting the cart before the horse at the moment. The House and Senate bills still need to be reconciled and both chambers will need to vote again on a final version of the Constitutional Carry bill. With the razor-thin margins for a veto override, gun control activists are already…Read entire article here.

Email ThisBlogThis!Share to TwitterShare to FacebookShare to Pinterest
Johns Hopkins Doctor Dismisses Walensky Fear-Mongering: 'Most Of The Country Is At Herd Immunity'
Scott Morefield / Townhall Tipsheet

Dr. Marty Makary, a surgeon at Johns Hopkins Hospital, disputed CDC Director Dr. Rochelle Walensky's contention that COVID-19 variants could set back the march to herd immunity from COVID-19 during a Thursday afternoon appearance on Fox News' "The Story."

Walensky on Wednesday called the various COVID-19 scariants, er, variants a "wild card" that could "reverse" the progress made so far.

In an op-ed for the New York Post published Tuesday titled "Don’t buy the fearmongering: The COVID-19 threat is waning," Makary argued against buying into the "fear" that variants could "evade vaccines."

Look at the facts: About 57 percent of adults are vaccinated and approximately half of unvaccinated people have natural immunity from prior infection. That’s why US cases have been plummeting, down 31 percent over the past 18 days.

Posted by Diane Sori at 6:42 AM No comments: