You won’t read about this in the newspapers or hear about it on the BBC or CNN. Instead they’ll tell you stories about Muslim cab drivers who offered “free car rides” to victims or free food from Muslim takeaway shops, as if that means anything at all. Does that end jihad terrorism? Does that work for reform in Islam? These PR moments merely shame people into thinking that suspicion of Muslims is wrong.

Attackers slammed a van into pedestrians on London Bridge late Saturday evening. The incident was immediately followed by a string of stabbings at Borough Market nearby. Pro-ISIS channels are heralding the attacks as “the black days we’ve promised” and are anticipating an ISIS claim, reports the SITE Intel Group, which monitors jihadi activity worldwide.

Listen to muslims celebrating London attacks and see actual footage of attacks here:  http://pamelageller.com/2017/06/listen-muslims-react-london-terror-attacks-laughter-shouts-allahu-akbar.html/
Posted by Diane Sori at 5:29 AM No comments:

Email ThisBlogThis!Share to TwitterShare to FacebookShare to Pinterest
It's Happened Again
By: Diane Sori / The Patriot Factor / Right Side Patriots on American Political Radio

BREAKING NEWS (6/3, 5:15 pm EST)...possible terror attack in London. London Bridge has been closed...people hit with vehicle, people stabbed, and shots fired...multiple ambulances on scene. More as it comes in. UPDATE: second incident occurring at Borough Market near London Bridge. UPDATE: third incident now being reported in the Vauxhall district of London. UPDATE: one person has died in van attack that ran into 20 people. Shots heard were fired by the police. All three incidents now being investigated as acts of terrorism. President Trump taking to twitter now with remarks. These people MUST be banned from entering our country...period. UPDATE: two of the three attacks have been confirmed as terrorism. UPDATE: reports out of India say seven people killed. Reports out of London say one person one ground with 'canisters' wrapped around his waist). UPDATE: 20 injured people...some critical...taken to six different area hospitals.

What we now know...at least seven people have been killed and 48 injured after three attackers drove a van into crowds on London Bridge and then went on a stabbing rampage in nearby Borough Market. Police said armed officers shot dead all three attackers within minutes of receiving reports of the terrorist attack unfolding in central London. The three men appeared to be wearing suicide bomb vests that were later confirmed to be fakes. Identities of the three have not been released as of this writing. Pro-ISIS media channels are heralding the attacks as “the black days we’ve promised” and are anticipating an ISIS claim, as per reports from the SITE Intel Group, which monitors jihadi terrorist activity worldwide. 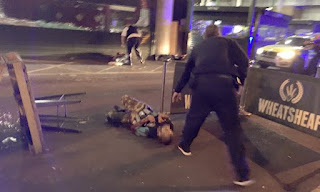 Posted by Diane Sori at 5:11 AM No comments: