Op-ed:
On Syrians, Governors, and a Madman Known as Obama
By: Diane Sori / The Patriot Factor / Right Side Patriots

The meek, I believe, shall NOT inherit the Earth for in today's world circumstances dictate that madmen will...and right now madmen have made Syria ground zero for WWIII. Syria...where more than a quarter of a million people have died since that country's civil war broke out in 2011...is now a country where the remaining half of the population...11 million out of 22 million people...have fled the continuing madness and are now bringing that madness with them as they overwhelm the countries of Europe...creating havoc and chaos in the countries of Europe.

Creating havoc and chaos puts the madness mildly, and with numbers this high the reality is that these people are NOT true 'refugees' seeking political or humanitarian asylum, but instead are part of a mass invasion...an invasion of the likes that even has the U.N. 'High Commissioner On Refugees' admitting that 65% of these people 'supposedly' seeking asylum are military-aged males between the ages of 18 to 40...in other words a good number of them most probably are 'islamists'...are terrorists. And the very same commission has stated that 75% of the incoming 'refugees' are men, a mere 12% are women, and 13% are children...to which I'll add children indoctrinated into the ways of radical islam...meaning that the Syrian men left their war torn country and hightailed it to Europe while leaving the majority of women and children at home to be slaughtered in the ongoing war. I would consider them shameful cowards if NOT for the fact that they are the forefront...the vanguard...of an all-out invasion of the West.

Madness on a global scale.

And even while the Arab countries of Lebanon with 1.1 million, Jordan with 629,000, Turkey with 1.9 million, Iraq with 249,000, and Egypt with 132,000 are hosts...albeit they hope temporary hosts...to almost four million Syrian so-called 'refugees' in total..the neighborhood oil rich Persian Gulf countries of Bahrain, Kuwait, Oman, the United Arab Emirates (UAE), Qatar, and Saudi Arabia...all of who rank in the world's top 50 GDPs and have a combined military budget of more than $97 billion...have taken in NO Syrian supposed 'refugees' at all.

And why...because they have visa restrictions in place that legally allows them NOT to help resettlement-wise. These countries are among but a few of the world's nations that have NOT signed the 1951 U.N. 'Status of Refugees' that defines what a refugee is and spells out refugee rights and countries legal obligations. And without their signing that means that any victim of war...in this case the Syrian civil war...would need to meet the same 'standards' as anyone else trying to obtain a visa to enter their country. And it does NOT matter that these countries have a financial and political stake in Syria nor does it matter that they have outwardly supported the 'supposed' rebels fighting against Bashar al-Assad or that they are part of the reason there are so many refugees heading into Europe, and Obama hopes soon into the U.S. as well.

And while Syrians can apply for a tourist visa or work permit in order to legally enter one of those oil-rich countries, those visas are extremely costly and very rarely granted. Without a visa Syrians are NOT currently allowed to enter, and if by some chance a few do get a visa their prospect of securing a job is small as they face a 'nationalization' drive that has both the Saudi and Kuwaiti governments trying to prioritize the employment of locals over non-Gulf Arabs whom they consider lower class Arabs. In fact, Kuwait even has an official strategy to reduce the number of foreign workers in their country by a million over 10 years. However, the truth is that these countries do NOT want their own 'lower class' brethren NOT because of 'nationalization,' but because they are worried that the so-called 'refugees' would threaten their nations' security...so in their eyes it's best to send their brethren into Europe and America instead.

Divert and distribute the madness elsewhere.

And yet these oil-rich Arab countries whine 'why them' when other so-called prosperous nations like Russia, Japan, and South Korea, haven't offered the 'refugees' any resettlement options at all. But still they make it a point to remain in the political mix as they try to dictate who should and should NOT take these people in, claiming they have a right to do so because they gave millions of dollars to the U.N. to help said 'refugees' settle elsewhere. But the truth is that the U.S. has given more money than any other country...a whopping $4.5 billion since 2011 when the Syrian conflict began equating to 31% of all monies given...to aid these anything but 'refugees.' 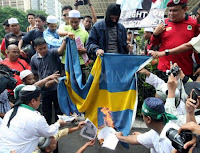 And to show just how much of a threat and how much these so-called 'refugees' cannot be trusted to abide by their host country's laws, over half of the 22,000 muslim refugees whose asylum applications were turned down by the Swedish government...most likely because of their islamist ties...refugees who were to be immediately deported back to their home countries...have slipped past the Swedish authorities and are now wandering free in Sweden and elsewhere in Europe.

And even with this Obama still insists we take thousands of 'them' into our country NO matter that the EU leaders are getting ready to give Turkey 3 billion euros... $3,169,740 billion in U.S. dollars...in what I consider 'bribe money'...if Turkey agrees to tighten its border security, clamp down on the flow of so-called 'refugees' into Europe, and if they agree to take back some 'refugees' who do NOT qualify for asylum in Europe. Clamp down on Europe and send them here as Obama has laid out the welcome mat for them.

Cunning madness against the very country and her people the madman swore to serve and protect.

“Nearly four centuries after the Mayflower set sail, the world is still full of pilgrims – men and women who want nothing more than the chance for a safer, better future for themselves and their families,” Obama said as he lays out said welcome mat for mostly young muslim men of the same sort that have invaded Europe... 'refugees' who cannot be vetted...'refugees' who have islamists embedded within their masses. And know that these so-called 'refugees' are NOT true refugees risking life and limb to get to freedom with their families in tow, but are people who for the most part are dissatisfied with their current host country's accommodations ...'refugees' who NEVER had a desire to live the American dream or to assimilate into the fabric of our American society but people who are unhappy that their European money pit is running dry.

But what of the Christians amongst them you ask...what few that are left after ISIS stained their ancient lands red with their own Christian blood...they are NOT welcome to come here...only the brethren are...as witnessed by the fact that the few who do make it here are being deported back to their mother countries to meet with certain death. Case in point, a federal immigration judge recently ordered a dozen Iraqi Christians deported from a facility in San Diego...probably to make room for more young muslim men I would guess.

Thankfully, 31 governors saw through Obama's rouse NO matter that the joke called the Council on American-Islamic Relations has said, "Defeating ISIS involves projecting American ideals to the world. Governors who reject those fleeing war and persecution abandon our ideals and instead project our fears to the world." Banding together to say 'NO...NOT in our state,' these governors rightfully oppose letting these 'unable-to-vet' Syrian refugees into their states, but the problem is that the states have NO legal authority to refuse them nor is there any lawful means that permits a state government to dictate immigration policy to the president. As the Supreme Court explained in Hines v. Davidowitz, “the supremacy of the national power in the general field of foreign affairs, including power over immigration, naturalization and deportation, is made clear by the Constitution,” meaning states do NOT get to overrule the federal government or the president on matters such as this one.

Sadly, in the end this means that these governors probably will be forced to accept said 'refugees' into their states especially when you add in that the 1980 Refugee Act gives Obama explicit statutory authorization to accept foreign refugees into the U.S. as well as giving him the authority to place refugees anywhere he so chooses within our borders. So, the only tangible option these governors really have left is to refuse to cooperate by making the acceptance process more difficult for the feds to implement as the states still retain the power to deny their own resources to the federal government. By doing this they could make settlement of refugees way more difficult both logistically and time frame wise than it would be if the states cooperated...in other words the governors could sanction what is civil disobedience on a state's governmental level.

And while the House easily passed HR2284...the bill to 'suspend the admission and resettlement of aliens seeking refugee status because of the conflict in Syria until adequate protocols are established to protect the national security of the United States and for other purposes,'* we now wait to see what the Senate will do and if they get enough votes to override Obama's sure to come veto.

And the madness now has taken on a life of its own in the very halls of our government.

And that waiting will give us time to digest what a vile little fool Barack HUSSEIN Obama is for while that vote looms Obama has been in Paris bloviating at the farce known as the 2015 U.N. Climate Change Conference...you know the conference where 147 world leaders sit around and blow hot air about the WEATHER.

And while Obama gave cursory lip-service to the terrorist attacks that killed over 132 people in Paris just a few short weeks ago, the prime focus of his bloviations was to warn his fellow leaders NOT to be distracted by terrorism...by his brethren...but to focus on what he said is the “looming threat of global warming.”

“What greater rejection of those who would tear down our world than marshaling our best efforts to save it,” said the man who helps equip 7th century savages with 21st century weapons. The words of a man truly clueless to the reality of the true dangers our Western civilization faces...and it ain't the WEATHER...but then again maybe he knows for even in madness some sense of sanity remains for only the truly mad would lay out the welcome mat for those out to kill us all...just saying.
_____________________________________________________

*This summary of HR2284 was written by the Congressional Research Service, a nonpartisan division of the Library of Congress.
This bill declares that: (1) no alien who is a refugee because of the conflict in Syria (covered alien) may be admitted to the United States as a refugee, (2) no funds may be expended to process refugee applications for covered aliens, and (3) no funds may be expended by the Department of State or the Department of Health and Human Services to resettle covered aliens in the United States.

These restrictions shall remain in effect until 30 days after the President certifies to Congress regarding: protocols and interagency coordination to adjudicate such U.S. admissions and resettlement; evaluation and review of such protocols and coordination by the Inspector General of the Intelligence Community; State Department submission to Congress of an updated Congressional Presentation Document of the Bureau of Population, Refugees, and Migration for Fiscal Year 2016 that reflects security or other risks posed by covered aliens; and a State Department briefing to Congress on the increase in covered aliens seeking refugee admission and so admitted, including information on any terrorist conduct.
This certification:
(1) may not be submitted to Congress before 270 days, and
(2) shall not have any effect if Congress enacts into law a joint resolution of disapproval within 15 days.
Posted by Diane Sori at 12:00 AM 17 comments: