Tomorrow, FRIDAY, August 7th, from 7 to 8pm EST on CPR Worldwide Media, Craig and Diane will host a special RIGHT SIDE PATRIOTS 'Election Debate Wrap-Up.' Hope you tune in to see who won, who lost, and who stuck their foot in their mouth. 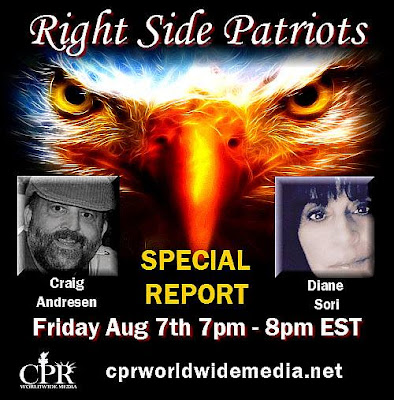 Posted by Diane Sori at 3:17 PM No comments:

Another terrifying incident at the hands of a gunman, another victim and another unwanted headline.

Curbing mass shootings in America has become a significant goal for Congress, particularly since the tragedy that befell Sandy Hook Elementary in December 2012. Since that fateful day, several liberal legislators have introduced gun control legislation that, while often introduced out of compassion, unnecessarily burdens Americans who own firearms. Does New York’s SAFE Act ring a bell?

Senate Majority Whip John Cornyn (R-TX), however, is now taking a different approach in the effort to combat gun violence. On Wednesday, he unveiled his Mental Health and Safe Communities Act, which would have the following impact on gun purchases:


But the bill would clarify the types of mental health records required to be forwarded to the National Instant Criminal Background Check System -- an issue raised in the recent shooting in Lafayette, La. -- and encourage states to send more information to the database by creating a stick-and-carrot compliance system. It would also encourage "best practices" for responding to mental health crises, including the use of specially trained response teams by federal and local law enforcement agencies.

States that comply with the program will receive up to 5 percent more government grants, while states that don’t send adequate amounts of data will be penalized.

The Washington Post argues that, while Cornyn’s legislation would address the mental health issue, it stops short of helping prevent another Charleston because it does not expand background checks.

However, as Matt pointed out in June, this policy, along with other anti-gun proposals from President Obama, would have done nothing to stop Dylann Roof from unleashing fire in Mother Emanuel Church.

Cornyn, who has an A-plus rating from the National Rifle Association, has already earned the organization’s support.

Cornyn’s bill is being viewed as a less strict version of Sen. Chuck Schumer’s (D-NY) offering on Monday.

The parties may not agree on the specifics when it comes to curtailing mass shootings, but at least some degree of bipartisanship overlap seems to be surfacing in the effort to prevent this senseless violence.

So, in the wake of Center for Medical Progress’ Planned Parenthood videos, New Hampshire has decided to defund the organization (via WMUR):


New Hampshire's Republican-led Executive Council rejected $639,000 in state funding for Planned Parenthood along party lines Wednesday amid a renewed national debate over whether the organization should receive public money.

"Voting against this contract is not going to stop one single abortion in New Hampshire, but it is going to stop thousands of people from accessing quality, affordable health care," Democratic Councilor Chris Pappas said.

The five-member council took up Planned Parenthood funding as part of roughly $1 million in state contracts with four health providers for family planning services, including STD testing, cancer screenings, counseling and access to contraception.
The council, controlled 3-2 by Republicans, approved contracts with the Concord Feminist Health Center, the Joan G. Lovering Health Center on the Seacoast and Weeks Medical Center in the North Country.

"I find it very, very troubling that anyone would vote against these contracts just because the national political climate is a little difficult,” according to WMUR. At the same time, almost 70 percent of Americans have no clue about the hideous videos that have been released over the past few weeks.

As if this deal would prevent that. And would the rockets come from Iran or the U.S.? Seriously, this posturing about being pro-Israel after agreeing to a deal that severely compromises Israel’s security is obscene. “Obama tells US Jews: Rockets will fall on Tel Aviv if Congress kills Iran nuclear deal,” by Michael Wilner and […]

Jihad hate preacher Anjem Choudary has been arrested for supporting/recruiting for  the Islamic State.

As bloody jihadi attacks on Americans on American soil have become commonplace, the Washington Post assigned one of their army of Islamic supremacists (as opposed to their other battalion of Islamic supremacists) on staff to report the story and attack …… Sean Hannity and me and anyone else who opposes Islamic savagery. The attack dog WaPo assigned, Ishaan Tharoor, is vicious in attacking us. Methinks he shed a tear upon hearing of Choudary’s arrest.

These are are “titans” of media in America. Is it any wonder that we are being destroyed from within?