Little girl dolls can be sex objects, too, I suspect. Might arouse a savage.

These dolls are devoid of humanity — they are an affront to humanity. It makes my skin crawl.

There is a reason that Britain is criticized by being called “Britanistan” and this is yet another example of how this western nation is allowing its own culture to be destroyed day by day, bit by bit, to be replaced by an Islamic culture. Now the Brits are selling “sharia compliant” dolls for little girls so that its local Muslims won’t get mad. ...

The UN has denounced this. On the other hand, the UN denounced the storage of Hamas jihad rockets in its Gaza schools, but did nothing to stop it, and even gave the rockets back to Hamas after they were found. The UN is a disgrace and should not be funded by American taxpayers (or anyone else).


Syrian opposition sources say al-Qaeda-linked Syrian rebels, known as the Al-Nusra Front, have taken over areas along the Israeli-Syrian border and have recently been spotted using UN cars to conduct terror operations.

According to the sources, the Al-Nusra Front has seized large swaths of the southern Golan Heights and has used UN cars during attacks against Assad’s army near the city of Daraa in southwestern Syria – a worrying sign of the capabilities of the Syrian al-Qaeda branch.

The Syrian opposition sources claimed the use of the UN vehicles was part of a double car explosion attack. The terrorist behind the attack, Abu Khattab al-Muhajir, was able to exit the vehicle before it exploded.

The UN car was the second of the two vehicles to explode and led to the deaths of two of Assad’s men who were not killed from the first explosion.

The al-Nusra Front uploaded photos documenting the attack to their Twitter account on Wednesday. The photos depict the major-general of the group, Abu G’libib, wiring the explosives himself.

The photographs depicting the usage of the UN car were also aired by state television of the Assad regime.

The UN responded to the attack and said, “using UN equipment by Jabhat al-Nusra to carry out terrorist acts is unacceptable.”…

Yeah. Time for you guys to issue another condemnation of Israel.
Posted by Diane Sori at 10:06 AM No comments: Links to this post

Poll: Americans Say Release of 'Torture' Report Hurts US More Than 'Torture' Itself

Via Allahpundit, a stark finding from YouGov's new poll released in the wake of Senate Democrats' deeply flawed report on CIA tactics after 9/11.  By a wide margin, Americans believe that airing this dirty laundry -- setting aside its accuracy -- is more harmful to US interests than the actual application of controversial 'enhanced interrogation techniques' or EIT's themeselves:

Take special note of which gender is more likely to pick option A on that menu.  Women, in this case, are more hawkish than men.  I suppose this overall result shouldn't be all that surprising, considering that seven in ten Americans believe that "torture" is at least sometimes justified, even when that loaded and debatable term is employed in the question wording.  YouGov also asked respondents whether or not certain forms of EIT's are acceptable, resulting in a yawning partisan divide on almost ever technique listed: 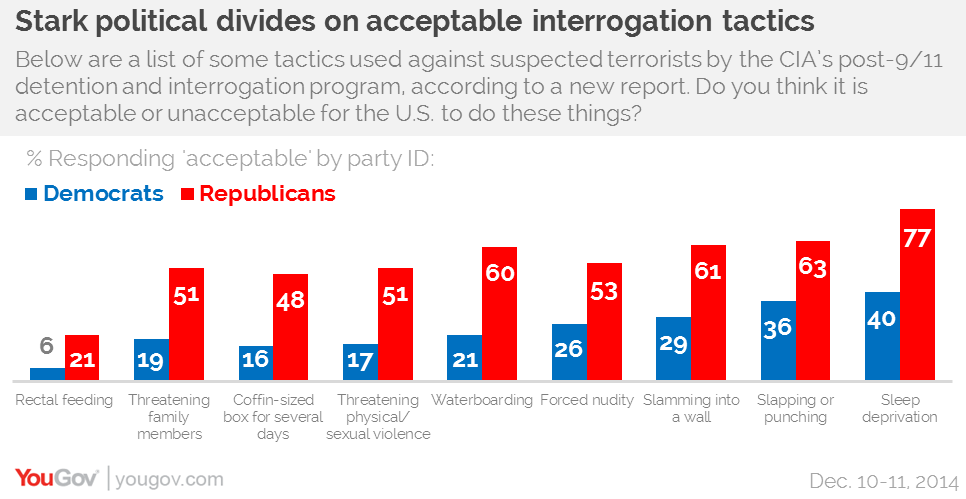 Majorities of Republicans favor every option, with the exceptions of (a) placing detainees in a coffin-sized box for days, and (b) the overwhelmingly-rejected practice known as, um, "rectal feeding."  Most Democrats reject every single option as unacceptable, including sleep deprivation.
Just so we're clear, four in ten Democrats furrow their brows and give a humanitarian thumbs-down to denying someone like 9/11 mastermind KSM adequate rest as we try to extract crucial intelligence from him -- yet almost six in ten Democrats are a-okay with instantaneously blowing KSM (and those around him) to kingdom come with a weaponized drone.  Because of "our values," or something.  Again, only about one-third of Democrats say slapping a terrorist is acceptable in the pursuit of actionable intel, but a strong majority are down with a summary execution, which provides no opportunity to glean valuable information.
Just one-in-five Democrats support waterboarding, a rarely-used technique that 'broke' two of the highest-level AQ terrorists we've ever had in our custody.  Forcing Abu Zubaydah and KSM into compliance helped lead us -- finally -- to take out Osama Bin Laden, a raid for which Democrats have not been shy about showering praise upon President Obama. Honestly, the only explanation for this incoherent disconnect that I can muster is adolescent partisanship.  "Torture" = Booooosh.  Drones = O.  Ergo, door number one is bad, bad, very bad, while door number two is a tough, necessary application of American force.  Bravo, guys. Party of science.

The Pew poll we mentioned earlier found that seven in ten Americans say "torture" is justified at least in "rare" instances.  But in today's YouGov poll, a 47 percent plurality believe the US can successfully prosecute the war on terror without using EITs at all.  Hmm.  I'll leave you with a hypothetical scenario: If, God forbid, we get hit again, and we've got one of the attack's masterminds in custody, and we know that he knows a lot more than he's willing to volunteer on his own or under traditional interrogation methods...how might Americans feel?  Should that terrorist be waterboarded or Mirandized?  Reminder: EIT's, independent of their moral acceptability, do work.  Here's a man that Dianne Feinstein and company didn't bother to interview while assembling their "exhaustive" findings:
Click on link to see video,,,
http://townhall.com/tipsheet/guybenson/2014/12/12/poll-americans-say-release-of-torture-report-hurts-us-more-than-use-of-torture-n1931161

“The Department of Justice refused to coordinate its investigation with the Intelligence Committee's review,” she said on the Senate floor on Tuesday, referring to the already-completed DOJ investigation which partially overlapped with her own. “As a result, possible interviewees could be subject to additional liability if they were interviewed. And the CIA, citing the attorney general's investigation, would not instruct its employees to participate in our interviews.”


“The [DOJ] investigation ended in 2012. It’s now the end of 2014. They [the Senate Intelligence Committee] had over two years to interview and talk to anybody involved, including the highest officials…”

“They [ended] up releasing a report without any of that,” he added. “No rebuttal, no context, no statements -- which tells me they had a single intent hanging the CIA out to dry, and they went looking for the evidence that fit.”

Columnist Rich Lowry made a similar point in his Politico Magazine column earlier this week.

“The committee’s chair, Dianne Feinstein, says such interviews were made impossible by Justice Department investigations into the people responsible for the interrogation program, but those investigations ended years ago,” he wrote. “The reality is that the committee didn’t want to include anything that might significantly complicate its cartoonish depiction of a CIA that misled everyone so it could maintain a secret prison system for the hell of it."

RIGHT SIDE PATRIOTS...LIVE...TODAY
On today's RIGHT SIDE PATRIOTS on CPR Worldwide Media from
11am-1pm EST, Craig and Diane will discuss the disaster known as the $1 trillion 'CRomnibus' spending bill that squeaked through the House (we might have a Senate vote by tomorrow's show), along with the Texas initiated lawsuit challenging Obama’s dictatorial amnesty plan.

Hope you can join us...http://cprworldwidemedia.com/live-radio/
and chat with live shows at
https://www.facebook.com/groups/cprworldwidemedia/
Posted by Diane Sori at 12:05 AM 11 comments: Links to this post