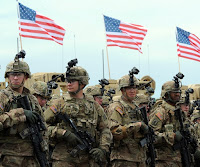 In a sobering assessment of America's military, a new report finds the nation's armed forces ready and able to handle "a single major regional conflict" but "ill-equipped" to handle two such campaigns.

The Heritage Foundation's 2016 Index of U.S. Military Strength gives mixed grades to each of the armed services, finding the Army "weak" – a downgrade from last year's "marginal" rating – because of a "drop in capacity," and the other units all "marginal."
For example, the report finds, the Navy is "just able to meet operational requirements," the Air Force is suffering from "degradation in capability and readiness" and the Marine Corps is hampered by aging equipment and "troubled replacement programs."

"Overall, the Index concludes that the current U.S. military force is capable of meeting the demands of a single major regional conflict while also attending to various presence and engagement activities but that it would be very hard-pressed to do more and certainly would be ill-equipped to handle two nearly simultaneous major regional contingencies," the summary states.

The Daily Caller notes the standard for readiness has traditionally been deployment in two arenas, although the Department of Defense modified that standard in 2014, counting a win in one major theater – and the ability to fend off an attacker in another – as readiness.

The annual Index also gave Russia, Afghanistan and Pakistan-based terrorism and China "high-threats" grades.
"As a whole, the global operating environment currently rates a score of 'favorable,' meaning that the United States should be able to project military power anywhere in the world as necessary to defend its interests without substantial opposition or high levels of risk," the report asserts.
Posted by Diane Sori at 9:01 AM No comments:

I mean this sincerely. Just shut the hell up. Give it a rest already. We are the United States of America, the greatest, most prosperous, freest, strongest nation in the history of the planet, and all we seem to do is whine. Knock it off.

That’s what it’s really about. Whining isn’t to change minds or draw in new support or sympathy; it’s to maintain and distract.

Donald Trump doesn’t want his supporters to recognize he’s been dining out on polls for months and is now losing in some. His poll inevitability was the only thing that made him inevitable. So now polls are wrong and unfair.

Meanwhile, when he’s not embracing liberal policies on the campaign trail, he’s still spewing platitudes. He’s displayed the depth of a mud puddle in August heat, and his support is drying up. If he’d stop whining and start working, he’d be a much better candidate.

Hillary Clinton is a different story. She’s not fighting to stop a slide; she’s going in for the kill. After having lied her way through a debate and congressional testimony, the media has declared her as having the best week since the invention of the Julian calendar. Still, she whines about being the victim of sexism.

And they will keep pushing it right up until the moment that the jihadis are at their door. “As Jihad Advances, Huffington Post Still Pushing Muslim Victimhood Myth,” by Pamela Geller, Breitbart, October 26, 2015: As presidential candidates are finding it tougher than ever before to ignore the reality of the global jihad, the Huffington […]

Walmart caved to Muslim Jew-hatred and pulled the pro-Israel costume I wrote about yesterday. Please sign this petition. We must stop submitting to Islamic hatred and bigotry.
Cultural jihad.

Six-thousand people have joined a social media campaign opposing Walmart after it pulled a pro-Israel Halloween costume from its website following pressure from activists.

Walmart removed a children’s costume depicting an Israeli Defense Forces (IDF) soldier from its website late on Thursday due to pressure from...