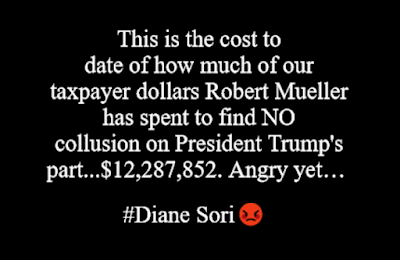 There it is. This is the real treason conspiracy. Since the first day President Trump took office, the party of treason has conducted a witch hunt, a baseless political prosecution of the people’s president and his administration. The FBI engaged in a systemic, strategic effort to stoke fears of Russian collusion during and after the 2016 presidential campaign. This deeply corrupt organization needs to be cleaned out from top to bottom. It is a disgrace to the nation. Lest we forget, this is the same organization that sent an undercover agent to egg on ISIS jihadis to attack my free speech event in Garland, Texas in 2015, and had no one there to stop the attack.

“THE REAL COLLUSION: Obama’s FBI Paid More on Russian Dirt and Fake News in 2016 Election Than Russia Did,” by Jim Hoft, Gateway Pundit, December 12, 2018 (thanks to Todd):

On Tuesday Google CEO Sundar Pichai was called in to testify before the House Judiciary Committee.

Read entire article here: https://gellerreport.com/2018/12/obama-fbi-russian.html/
Posted by Diane Sori at 7:04 AM No comments:

By Matt Richardson | Fox News
The Affordable Care Act, also known as Obamacare, was struck down by a Texas judge on Friday, a move that could suddenly disrupt the health insurance status of millions of Americans. The decision comes amid a six-week open enrollment period for the program.

Texas, along with 19 states, had argued to U.S. District Judge Reed O’Connor that they had been hurt by a jump in the amount of people utilizing state-backed insurance. When Congress cut the tax penalty from the program in 2017, the states claimed, it essentially undercut the Supreme Court’s reasoning for finding former President Barack Obama’s signature legislation constitutional in 2012.

“The remainder of the ACA is non-severable from the individual mandate, meaning that the Act must be invalidated in whole,” O’Connor wrote in a 55-page opinion, according to Bloomberg. O'Connor is a conservative Republican appointee who previously blocked other Obama-era policies.