Posted by Diane Sori at 2:57 PM No comments:

This hypocrisy is no surprise. For Hillary and the Democrats, it was all about destroying Trump. Not about telling the truth, or defending America, or pointing out any genuine threat from Russia.


HILLARY Clinton’s election team met with the Russian ambassador during the campaign, a Kremlin spokesman has revealed as he ordered the US should stop “demonising” Russia.

Dmitry Pesov, the Russian spokesman, is adamant his country “never” intervened in American politics and it is “fake news”.

Speaking about the Russian ambassador, Sergey Kislyak, he said: “If you look at some people connected with Hillary Clinton during her campaign, you would probably see that he had lots of meetings of that kind.

Today, Tuesday, March 14th from 7 to 9pm EST on American Political Radio, Right Side Patriots Craig Andresen and Diane Sori discuss Untainted Objectivity and Nothing Less, Tapping Trump...The Plot Thickens, and the Dichotomy of Winning vs. the Will to Win.

Hope you can tune in at: http://tunein.com/radio/American-Political-Radio-s273246/
Posted by Diane Sori at 2:04 AM No comments:

Email ThisBlogThis!Share to TwitterShare to FacebookShare to Pinterest
Labels: American Political Radio, Craig Andresen, Diane Sori, Right Side Patriots
Op-ed:
The Dichotomy of Winning vs. the Will to Win

And to that I will add that the will to win, while ours, is lost to both political correctness and to a simple fear of admitting what is the truth...the truth that we are indeed fighting a war against islam, but that we are just too afraid to either admit it or to say it out loud.

Best we bury our heads in the sand and deny that truth than dare to admit it or say it out loud...or even whisper it under our breaths...not even now that we have a much welcomed change of administrations. And that is why the battle against what’s now being called ‘radical islamic terrorism’ instead of what it truly is, still has that battle not going as well as we had hoped it would be. And when you couple that with the fact that democracies or in our case a constitutional republic (who many still erroneously call a democracy) were not designed to fight or triumph over an enemy the likes of islam.

And why...because a great chasm of differences exists in how both sides have always viewed the world, and until that chasm is bridged there will be no actual winning the war by either side.

Islam, side one, has for almost 1400 years methodically and with the utmost of patience and malice conquered and taken over one country at a time while bending said country’s populace to its will alone. Submit, subvert, or die...a simple plan carried out by the blood of the sword both figuratively and literally.

But this is not how side two...as in democracies...work...for democracies do not conquer and absorb...democracies might conquer to the point of winning a given war, but they do not absorb said country or its populace into their own as a spoils of war nor do they insist on submission to their will.

And until democracies acknowledge, account for, and accept this critical difference, this current battle, I’m afraid, will continue to rage on for a very long time.

And continue on the battle goes as we in what some call ‘secular democracies’ continue to fight what amounts to us going into battle blindfolded, for until we remove our blindfolds and see, understand, and accept as fact that islam is NOT a religion...that islam is a political system cloaking itself in the guise of religion all while it wraps its tentacles around its followers until it squeezes the very life blood out of them...and while we might win a skirmish or two we cannot and will not win the ultimate prize...as in sending islam back to the seventh century where it belongs.

In other words, to actually attain victory over islam we must move forward in calculated increments...small steps at first until we are running full force into the enemy. But the first step taken must be both the realization and acceptance as fact that we are not fighting a benevolent religion but a man-made ideology based solely upon death, destruction, and conquest. And to make it worse is that this very ideology has for eight years been freely allowed to invade and infiltrate our country in the name of ‘inclusion.’ 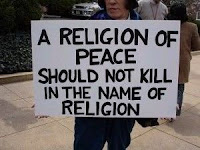 Inclusion...nothing but a failed multicultural model pushed on us so as not to upset the sensibilities of those wishing us dead...inclusion is a word that could well signal the demise of us all as it has some here in our country even now continuing to insist that islam is a religion of peace, and that by allowing muslim refugees into our country that we are doing a good thing. Remaining blind to the ever increasing body count in the still ongoing muslim invasion of Europe...a body count that includes rapes, assaults, and murders of we infidels...is not only lost on these kumbaya sorts but proves their supposition quite untrue. And dare we forget that also as shown in Europe, these invaders will never assimilate nor will they ever accept the way of life of our country, and they surely will never accept our rule of law that is the Constitution, for to these invaders the sharia trumps all.

And if one is to truly understand the truth about islam and its twisted hate-filled ideology...an ideology that has its leaders openly vowing to subjugate the entirety of the West...and know that they can indeed do so by simply working covertly within a country’s civilian population through terrorist attack after terrorist attack shaking up said country’s people to such a degree as to make them cower in weakness, thus being ripe for the taking. And one just has to look to Germany to see this in action.

And it now must become an accepted sad fact that even if we are successful in getting rid of one or two tentacles of islam ‘over there’...say ISIS and al-Qaeda...it does not mean that other tentacles will not grow to take their place ‘over here’...tentacles even more vicious perhaps.

So what this means is that the battlefield against islam must not just be fought on land, sea, and in the air, but that the battlefield and all its tangible aftermaths must be brought directly to each individual follower of islam...to each and every muslim...who must accept as fact that they have been duped by the words of a perverted madman who sought an army of followers solely to satisfy his own selfish wants of wealth, power, and immortality.

These folks...muslims as a collective whole...must also accept the truth that political islam...as in the sharia...and jihadi violence masquerading as and done in the name of religion...in the name of islam and allah...are indeed one and the same...a simple dogma of death and nothing more.

And the world’s democracies must also accept certain facts and truths as well...in addition to the afore mentioned all important fact that islam is not a religion... prime of which is that the cesspools of countries most muslims call home must themselves put a stop to the infighting of sunni vs. sh’ite and of the rich vs. the poor, and help take care of their own. And with most muslim countries being oil rich that truly would not be very hard to do...for that particular battle is not now and must not ever be our battle to fight.

Remember, that very infighting coupled with failing economies those countries leaders so love to blame on everyone but themselves...in addition to the mullahs who perpetrate the lie and hate that is islam...is what gave birth to the terrorist factions in the first place. Creating fertile ground for said terrorist groups to grow and recruit followers, as well as to wage war against not only their own but against the sum of we infidels...whether we be Christian or Jew, Hindu or Buddhist...what the mullahs have done is throw log after log onto the fire of death, thus fueling the pyre of hate and revenge for a miserable existence that is of their own doing.

And it is these failing economies encasing the majority of muslim countries that has led to the refugee crisis we now find ourselves facing for these people...mostly young healthy muslim men...are not fleeing war per se as they relish and thrive in war and in infidel blood spilled...but are fleeing with their hands out for the expected almighty dollar as well as to help their task masters absorb the countries they invade into the ever expanding caliphate. This means that military decisions made and victories alone are not and have never been the answer to the West's muslim problem, although a heavy-handed military show of force might just well be a short-term solution that can be used to buy us the time needed to try and wake up the world's muslim populations to the fact and the truth that it is islam itself that is causing all their woes.

But with us now being forced to take in a set number of muslims into our country, the question remains how much damage will they do to our country...to the fabric of our Judeo-Christian American society...before we are finally free to fight back...before we are able to totally stop the muslim infiltration of our country whether by military might or by the president’s ‘pen.’ Right now we seem unable to do so even in the name of self-preservation for the kumbaya sorts seem to be more than willing to counter every action taken to do so. But if truth be told that fault is partially our own, because we on the right still refuse to name the true enemy and by not doing so the masses remain both uninformed and misinformed as to the dangers we face.

And so we have come full circle back to where my article began...back to the fact that in the name of inclusion and of political correctness...and saying the words ‘radical islamic terrorism’ is still shy of speaking the truth...that until we have the fortitude and courage to actually name islam itself as the enemy...there remains a chance that no matter the military actions taken...no matter what steps are eventually put into place to stop them from coming here...Europe’s future might well be our own.

And to possibly lose the war we now find ourselves in...a true war of civilizations...simply because we failed to both name the enemy and to fight them with a true will to win via a strong and rightful moral resolve...would indeed be the saddest thing of all.
Copyright © 2017 Diane Sori / The Patriot Factor

Today, Tuesday, March 14th from 7 to 9pm EST on American Political Radio, Right Side Patriots Craig Andresen and Diane Sori discuss Untainted Objectivity and Nothing Less, Tapping Trump...The Plot Thickens, and the Dichotomy of Winning vs. the Will to Win.

Hope you can tune in at: http://tunein.com/radio/American-Political-Radio-s273246/
Posted by Diane Sori at 12:00 AM No comments: