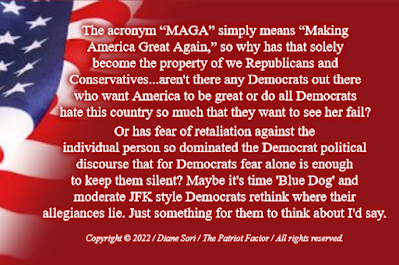 Posted by Diane Sori at 2:45 PM No comments:

A Democrat Senate candidate is ready for his party to move on from President Joe Biden, insisting that “new leaders” need to take over Washington D.C.

During an interview, Tim Ryan (D-OH) said that Biden should not run for re-election in 2024, adding that it’s time for a “generational move” for both sides of the aisle.

“My hunch is that we need new leadership across the board, Democrats, Republicans,” Ryan said when asked whether or not he thinks Biden should run again.

“I think it's time for a generational move for new leaders on both sides. I think the environment politically across the country is poisonous and, you know, people, I think, want some change and I think it's important for us in both parties,” he continued to say.

Ryan claimed that he is campaigning as an “independent” and had demonstrated efforts to distance himself from Biden. When asked why he has not welcomed Biden to Ohio, Ryan said that he is “not really asking anybody.”

Judge Aileen Cannon granted the Trump legal team’s motion for a special master to review the documents the FBI seized after they raided Mar-a-Lago on August 8. She also issued an injunction on any further analysis by the Department of Justice regarding these documents. The core of the Justice Department’s investigation into the Trump records is on hold. Of course, the government filed an appeal, which, even on an expedited track, could take several months to resolve—and the DOJ could lose the motion. They also predicted that delaying their investigation into Trump could create a national security issue.

Some of the files taken consisted of Time magazine covers and empty folders. The credibility of the FBI, especially under a Democrat, is nonexistent. And the Justice Department’s pervasive leaks concerning this probe are of equal concern since the updates are primarily fake news. The media, in typical fashion, couldn’t care less. So, with a prolonged appeal fight ahead, the Justice Department also is duking it out with Trump’s lawyers over special master candidates (via NYT): Read more and see tweets here.

Posted by Diane Sori at 8:06 AM No comments:

Email ThisBlogThis!Share to TwitterShare to FacebookShare to Pinterest
RIGHT SIDE PATRIOTS...PodCast
If you missed last night's show where RIGHT SIDE PATRIOTS Craig Andresen and Diane Sori discussed all things Queen Elizabeth...the life, times, and legacy of her 70 year reign; the world's reaction to her passing; and its ramifications on now King Charles III...you can listen to it (and previous shows) at your convenience at: https://rspradio1.com to go directly to our podcasts and hope you become 'followers' of RIGHT SIDE PATRIOTS.